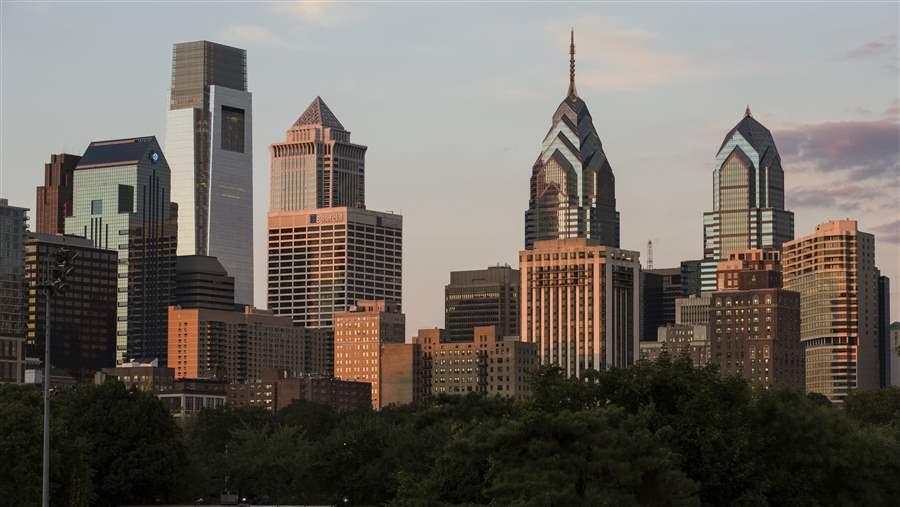 Philadelphia’s tax policies have been an ongoing focus of public debate in the city. Pew’s research on the topic has included examinations of local property tax assessments and collections, the residential tax burden in the city compared with its suburbs, and business tax incentives and exemptions.

The Pew Charitable Trusts sought to quantify the city’s tax expenditures and compare them with those of other major cities.

To help attract and retain companies, Philadelphia has adopted 21 tax incentives and exemptions. The Pew Charitable Trusts sought to quantify these tax expenditures and compare them with those of other major cities to assist policymakers and the public in better understanding the scope of the measures.

For years, federal and many state financial officers have had to report revenue foregone by their governments as the result of business tax incentives and exemptions. Those types of disclosures have not been required by most city governments, but from now on they will because of new rules passed by the Governmental Accounting Standards Board.

A new Pew analysis shows that increased land values will result in larger property tax bills for 23,157 of these residential parcels.

This brief assesses the progress of the reform effort through spring 2015, including the role of the review and appeals process and new relief programs, and highlights issues that remain to be resolved. It addresses both the hopes of supporters, who said the reform would help make the city’s property tax system fairer, and the fears of critics, who said the new values, by producing dramatically higher tax bills in some residential neighborhoods, would drive out homeowners and reduce home prices.

AVI: The Shift in the Tax Burden

The report estimates the potential impact of the Actual Value Initiative on the allocation of the city's tax burden by categories of property. It finds that under AVI, as a result of the citywide reassessment done to correct years of inaccuracy, residential property would account for a greater share of the city's overall property value—and thus the tax burden—and commercial property for less.

This study looks at the experiences of other cities and counties, the long history of fitful reforms and partial reassessments that have brought Philadelphia to this point, and the measures that the city is considering to help mitigate the steep tax increases that await some homeowners.

The city of Philadelphia has improved its performance on collecting delinquent property taxes, according to a new analysis by The Pew Charitable Trusts. The analysis covers 2013, the latest year for which complete comparable data were available.

The goal of this study was to understand Philadelphia's real estate tax delinquency and compare its practices to those of other cities.

This 2016 brief examines the taxes that a hypothetical, homeowning family would pay in the city versus the suburbs and finds that the tax disadvantage of living in Philadelphia is at its lowest point in 15 years.

Comparing the Tax Burden in Philadelphia and the Suburbs

Residential Taxes: A Narrowing Gap Between Philadelphia and its Suburbs

This 2012 study of state and local tax burdens set out to determine how much a hypothetical home-owning family paid in Philadelphia compared to the suburbs, and how the city-suburban tax gap has changed in recent years for both commuters and noncommuters.

Elected officials, academics, economists, and business leaders talked about the city's tax structure, its impact on the local economy, and ideas for reforming it.