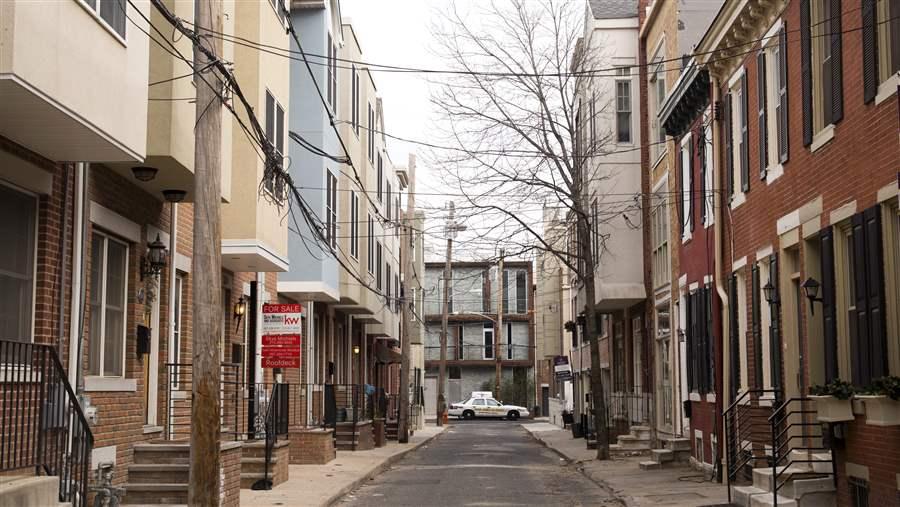 Ongoing reassessments are essential to making a property tax system as accurate as possible.

The assessed value of every piece of real estate in Philadelphia has two elements—the value of the land and the value of the structures. In 2013, when Philadelphia’s Office of Property Assessment (OPA) conducted a citywide property reassessment as part of the Actual Value Initiative (AVI), some critics said that the effort placed too much of many parcels’ overall value on structures and not enough on land. To conform more closely to the standards followed in other communities, the OPA is reassessing the land value of all city parcels, beginning July 1, for the new fiscal year.  As we reported in our 2012 study, The Actual Value Initiative: Overhauling Property Taxes in Philadelphia, ongoing reassessments are essential to making a property tax system as accurate as possible.

In the last reassessment, land values rose for 58 percent of the 579,447 parcels in the city. Nearly all the parcels are residential, and for the vast majority of them, the total property value did not change; increased land valuations were offset by decreases in the assessments of the structures.

But a new Pew analysis shows that increased land values will result in larger property tax bills for 23,157 of these residential parcels.1 The increase in tax revenue for the city government and the School District of Philadelphia will be about $13.3 million, roughly 1 percent of the total revenue produced by the property tax. Pew’s analysis used the 2017 properties dataset and the historical property assessment dataset from the OPA.2

The analysis shows that the tax hikes occurred for two reasons:

First, in 71 percent of the cases, the higher land valuation was not offset by a lower structure valuation, resulting in a larger overall assessment.  These properties were concentrated in Center City, Roxborough, and the Far Northeast. Just over half of them will benefit from tax abatements or exemptions in 2017. (See Figure 1, left.) Parcels with the highest increases were mostly located in or adjacent to Center City. The tax hikes in this category total $7.8 million; the citywide median was $266.

The other reason some properties saw increased tax bills was that they had been receiving the city’s 10-year tax abatement and the higher land assessment reduced its impact. This was true for 29 percent of the cases—6,762 in all.

Philadelphia’s abatement program exempts a portion or all of the value of the structure, but not the land, from taxation. The size of the abatement is based on the value of construction or rehabilitation work done by property owners. For these parcels, the valuation of the land went up while the structure’s value went down, often by the same amount. But since most abatements are based on a percentage of structure value, this shift in valuation from structure to land reduced the impact of the abatement, leading to a higher tax bill. There were 15,118 10-year tax abatements in effect in Philadelphia in 2016. Taxes on these properties will rise by about $5.5 million. The citywide median increase in tax bills was $480.

Most of these 10-year abatement parcels are located in and around Center City, with substantial numbers also in East Falls, Manayunk, Roxborough, South Philadelphia, and parts of the Far Northeast. The largest numbers of them are in ZIP codes 19146 and 19147, which include the Graduate Hospital, Point Breeze, Bella Vista, and Queen Village neighborhoods, and in 19123 and 19125, which include Northern Liberties and Fishtown. (See Figure 1, right.) The biggest increases on average are clustered in and adjacent to Center City and in the Far Northeast. (See Figure 2.) 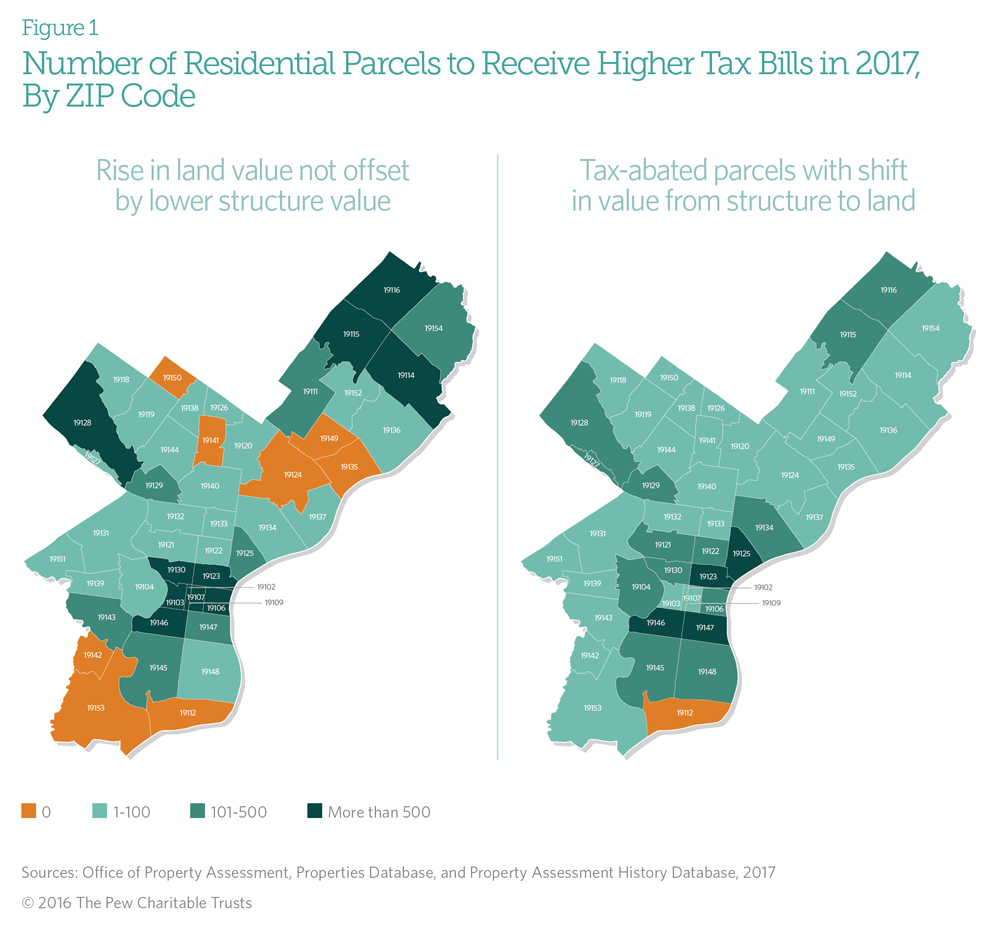 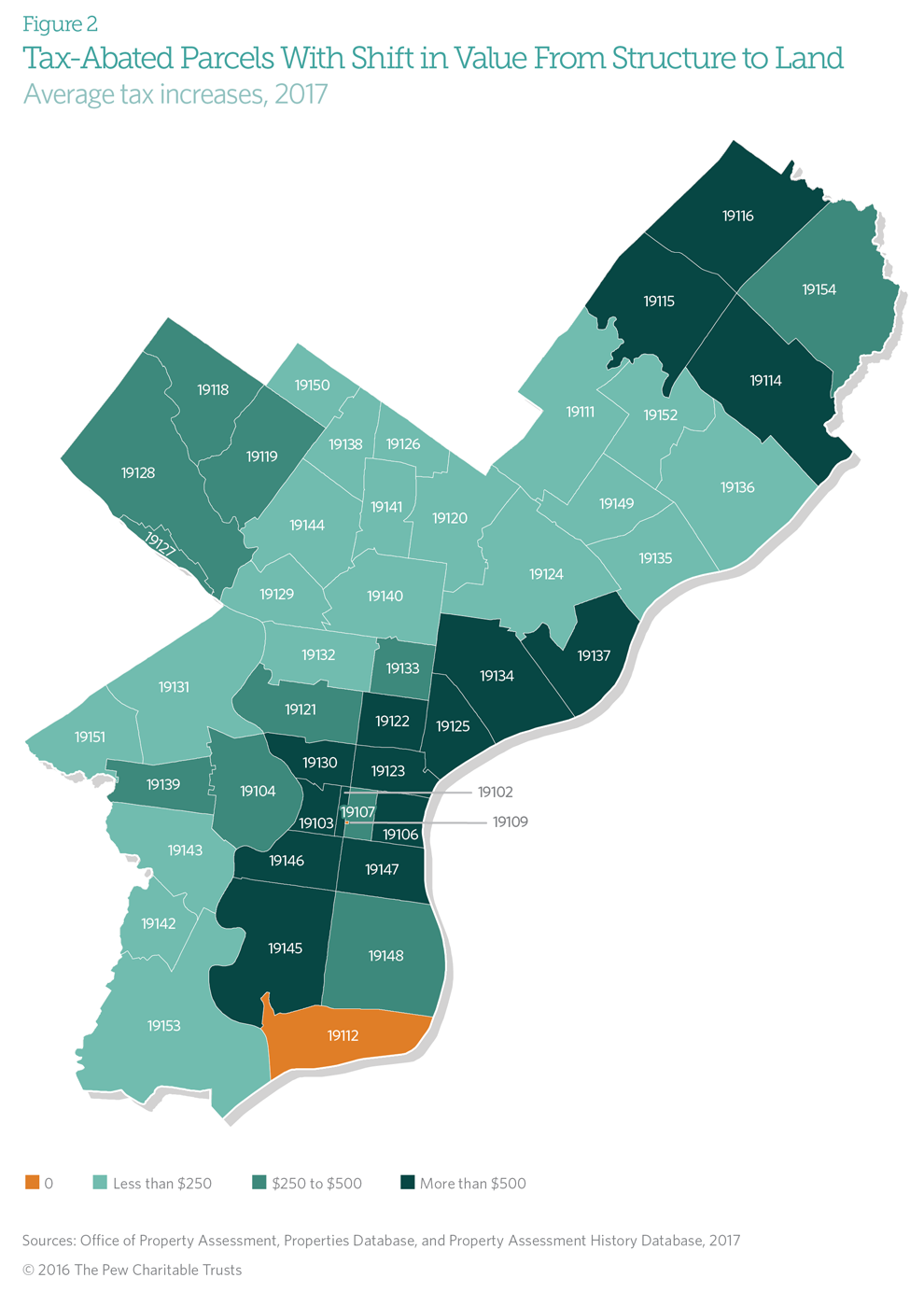 The 10-year tax abatement has been a political flashpoint in the city since 2000, when it was adopted in its current form. Supporters credit it with encouraging new construction and rehabilitation of properties and cite it as a major contributor to the city’s building boom. Critics say that it unfairly benefits wealthier residents, many of whom are newcomers; leads to increased property taxes for longtime Philadelphians; and is no longer needed to encourage development.

Over the past three years, members of City Council have introduced bills to reduce, expand, and target the abatement—none of which has been enacted. In the meantime, the OPA’s shift to higher land values has had the effect of reducing the program’s financial impact.