As Philadelphia embarks on a new system to assess and tax real estate, the city's longstanding problem with property tax delinquency has taken on new urgency. Property owners whose taxes are projected to go up substantially are questioning why they should pay more when others pay nothing. The goal of the study Delinquent Property Tax in Philadelphia: Stark Challenges and Realistic Goals was to understand Philadelphia's real estate tax delinquency and compare its practices to those of other cities.

As of April 2012, the city and school district were owed $292.3 million in delinquent taxes on 102,789 properties, $515.4 million when interest and penalties are included. (The numbers have increased since then.) About one-quarter of those properties had been delinquent for more than a decade. Figuring out how much of this money Philadelphia might collect, and how, have been nagging questions for years. A Pew Charitable Trusts analysis estimates that the city should be able to collect at least $155 million or about 30 percent of the $515.4 million over the course of several years, assuming that well-funded tax collectors use all of their statutory powers, including foreclosure, more aggressively than in years past. But as much as 70 percent of the $515.4 million is most likely uncollectable. This year, the city levied about $1.2 billion in property taxes for itself and the school district.

Of 36 cities studied in this report, Philadelphia had the fifth highest delinquency rate in 2011, the last year for which statistics were available. Our study found that many of the cities with lower delinquency rates than Philadelphia adhere to stricter timetables for imposing enforcement measures against delinquent property-owners—timetables usually set by the state—and are more willing to take properties away from owners who do not pay their taxes. At the same time, a lot of these cities have lower percentages of poor people, stronger real estate markets, and higher shares of homeowners who pay their taxes automatically through mortgages. 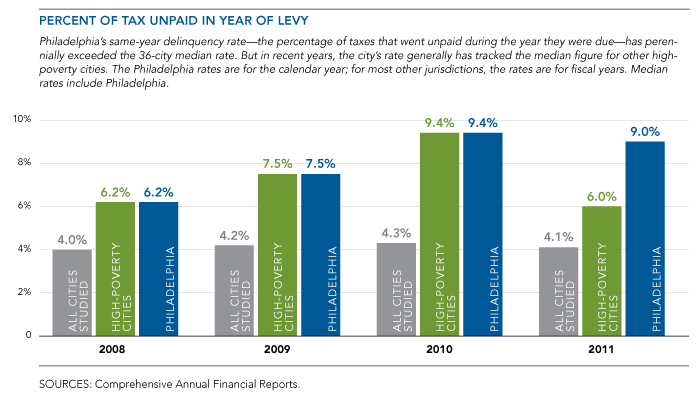 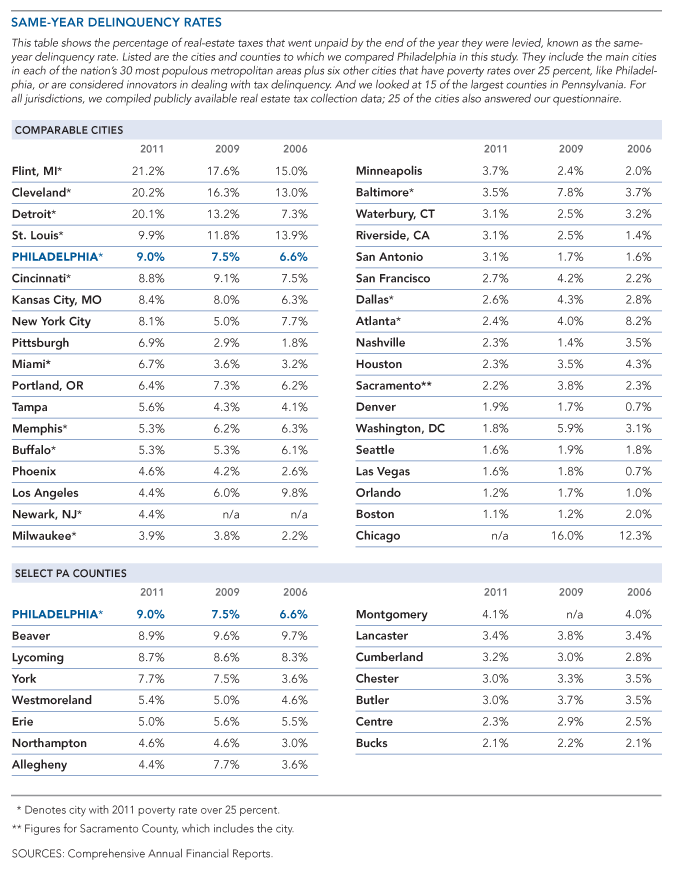