Since 2009, The Pew Charitable Trusts has been working around the world to end illegal fishing through a strategic combination of policy, market, technology, and enforcement efforts. Here are six ways in which we know our system is paying off.

Ports that are known for lax law enforcement or limited inspections are a prime pathway for illegally caught seafood to enter the marketplace. The number of such ports is shrinking under the Port State Measures Agreement (PSMA), a United Nations treaty that entered into force in 2016.

Operators of foreign-flagged vessels seeking to unload catch in a PSMA member’s ports must request permission to do so from the country’s fisheries authority, which may refuse entry to known or suspected illegal fishers pending the outcome of an inspection. Member nations are also expected to bolster inspections for domestic vessels. After encouraging countries around the globe to ratify the treaty, The Pew Charitable Trusts is now helping them to implement it.

Illegal fishing can cross multiple jurisdictions. A trawler might be flagged to one country, fishing in another’s waters, and owned by a company in a third nation, a scenario that historically has allowed illicit actors to exploit a lack of coordination among law enforcement agencies as well as weak regulations, monitoring, and enforcement by individual nations.

Interpol’s Project Scale is helping to close these gaps. With support from Norway and The Pew Charitable Trusts, the international policing agency is helping its 192 member countries collaborate to catch illegal fishermen. In its biggest case to date, Interpol provided information that led to the convictions of the captain and some of the crew of the Thunder, which had been used for more than a decade to poach tens of millions of dollars’ worth of Patagonian toothfish from the Southern Ocean.

Using an algorithm, the Oversea Ocean Monitor system processes data from satellites, vessel databases, oceanographic charts, and other sources to alert analysts in near-real time to suspicious activity on the water, such as vessels possibly fishing in marine reserves or illegally transferring catch at sea. Without the technology, this analysis can take days or even weeks, giving criminals ample time to evade authorities.

Pew launched Oversea Ocean Monitor in 2015 with the U.K.-based firm Satellite Applications Catapult; the system is now managed by the British not-for-profit fisheries intelligence group OceanMind. Early adopters of the technology include Chile, Ecuador, Thailand, and the British government, which used the system to gain the assurance it needed to designate the waters surrounding the Pitcairn Islands as a fully protected marine reserve. Oversea Ocean Monitor is also helping seafood buyers to ensure that the vessels that supply them comply with fishing regulations. 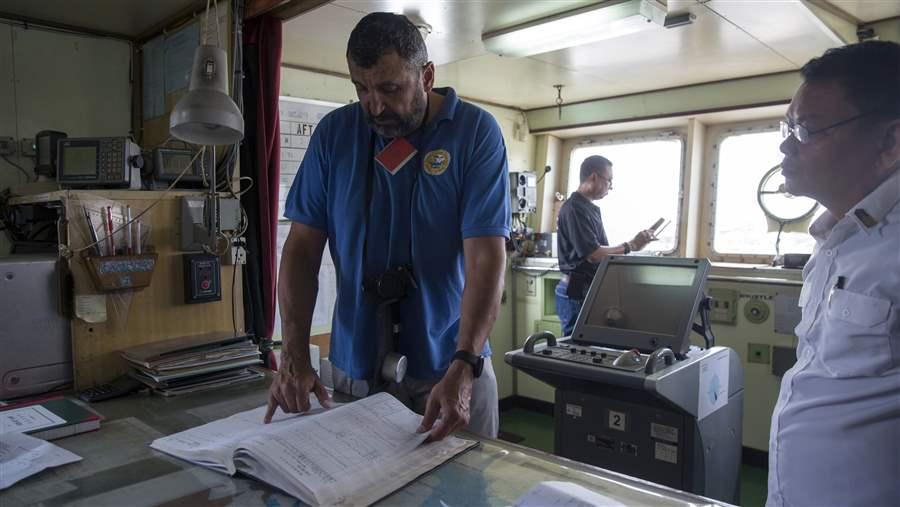 A fisheries officer looks at the Captain's log-book during an inspection of a Thailand-based fishing vessel containing large quantities of tuna.

Seafood, from both wild and farmed sources, is the most valuable food commodity in the world, accounting for nearly $150 billion in global trade per year. Pew is working with seafood buyers and processors to help them keep illegally caught fish out of their supply chains—and off store shelves. This includes advocating for strong fishery laws and using technology such as Oversea Ocean Monitor to ensure that their suppliers are complying with fisheries regulations.

Pew is also developing tools to help flag and port States prove to seafood industry buyers where, when, and by whom the fish they sell was caught.

Illegal operators use a range of tactics to avoid detection and prosecution, including changing the name of their vessels or the flag of registration. Historically, they have gotten away with this because fishing vessels have not been required to have identification numbers. But that, too, is changing.

With engagement by Pew and international partners, all major regional fisheries management organizations (RFMOs) have put measures in place to ensure that every vessel has a unique seven-digit International Maritime Organization (IMO) number that stays with the ship until it is scrapped. The RFMOs also require that all vessels over a certain size have location trackers onboard.

The European Union and some other governments also require IMO numbers on vessels above a certain size or weight.

A Pew-supported initiative launched in 2012 is helping eight East African countries to stop illegal fishing in that region. Through FISH-i Africa, the countries—Comoros, Kenya, Madagascar, Mauritius, Mozambique, Seychelles, Somalia, and Tanzania—are using an Internet platform to collect and disseminate information about suspicious vessels, sharing remote sensing data, and assisting each other with enforcement.

This collaboration has enabled countries with limited resources to conduct remote surveillance and quick-response enforcement in their waters.