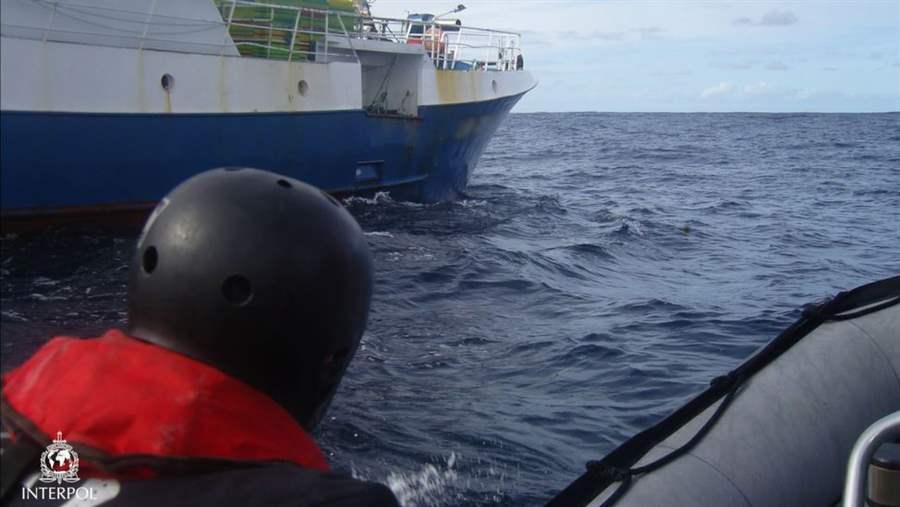 Maritime officials from a multinational team prepare to board a vessel in the Bay of Biscay off France and Spain.

In the four years since it began, an initiative to detect, suppress, and combat illegal fishing and other fisheries crimes around the world is paying dividends. Project Scale—an effort launched in February 2013 by the international police organization Interpol, in collaboration with the government of Norway and The Pew Charitable Trusts—has helped send some illegal fishing operators to prison, chased others off the water, and tightened collaboration among some of Interpol’s 190 member countries in the fight against crimes that are often far-reaching and complex.

Illegal, unreported, and unregulated (IUU) fishing is estimated to account for up to US $23.5 billion worth of fish annually worldwide, or up to 1 in every 5 fish that goes to market. Other fisheries-related crimes include tax evasion, fraud, corruption, and bribery. Together these transgressions rob coastal communities of vital sources of food and income, skew scientific assessments of fisheries, and damage the marine environment.

Many fisheries crimes simultaneously implicate numerous governments, corporations, and individuals—for example, a vessel flagged to one country, fishing in another’s waters, owned by a company in a third nation, captained by someone from a fourth, insured in a fifth, and with revenue from catches circulated or laundered in a sixth.

Historically, criminals have easily gotten away with many of these offenses by targeting countries with few monitoring and enforcement resources, exploiting loopholes in fisheries regulation, and taking advantage of a lack of communication between law enforcement agencies both within and among countries.

In launching Project Scale, Interpol and its partners sought to leverage the organization’s proven international crime-fighting strategies, tactics, and global reach. Its policing capabilities include a range of tools, one of which is a color-coded alert system for seeking information on suspects and mobilizing cooperation—often among numerous countries—in catching them.

The best-known among them came in December 2013 and targeted the Thunder, a vessel that had been fishing illegally, under various names and flags of registration, throughout the Southern Ocean for more than a decade. That Purple Notice helped set the stage for a dramatic series of events that culminated in 2015 off the coast of Sao Tome and Principe near West Africa, where police arrested the captain and crew on a host of charges, including intentionally sinking the Thunder to destroy evidence of IUU fishing and filing a fraudulent insurance claim to fund the purchase of a new vessel.

Numerous governments, notably Mauritius, Germany, and Canada, worked together to provide evidence in the case, resulting in significant prison sentences and a combined fine of $17 million for the vessel’s owner, captain, and two crew members on charges related to damage against nature, reckless piloting of a vessel, forgery, and pollution.

The Project Scale team, made up of criminal intelligence officers and multidisciplinary analysts, coordinates training and workshops around the globe to help countries build the capacity to fight fisheries crimes. When needed, Interpol can call on its experts in areas of crime often associated with IUU fishing, including human trafficking, money laundering, and maritime piracy.

The team also holds regional investigative and analytical case meetings that allow countries to exchange information on transnational fisheries crime. One such meeting, involving police, fisheries and customs investigators from eight countries, helped lead to a breakthrough in the case against the operators of the Kunlun, a vessel used in the illegal fishing of millions of dollars’ worth of toothfish from the Southern Ocean. In 2016, Spain led a successful administrative case against the vessel’s owners, fining them $18.5 million (17 million euros) and banning them from involvement in commercial fishing for up to 23 years.

Project Scale has helped raise global awareness of fisheries crimes and their consequences. The initiative has also increased cooperation among national agencies and international partners, and bolstered the law enforcement capacity of countries that are particularly vulnerable to maritime crimes. However, for these benefits to continue, Interpol needs continued support for Project Scale.

The network is only as strong as the number of countries that join. The more nations that participate in Project Scale, the harder it will become for illegal fishers to find the transnational gaps that allow their illicit business model to succeed.

A growing number of cases show that the global community can effectively fight IUU fishing and associated crimes. By expanding the network and collaborating more closely, Pew believes we can end this costly and destructive crime for good.

Up to 1 in 5 fish taken from the sea is caught illegally, costing as much as $23.5 billion globally each year. This illegal fishing harms ocean health and law-abiding fishers whose livelihoods depend on fish&mdash;and is often indicative of the presence of other transnational crimes. But with sophisticated technology and international cooperation, as well as greater industry engagement, we can help deter these crimes on our oceans. Host Dan LeDuc talks with Peter Horn, who leads Pew&rsquo;s work from London with Oversea Ocean Monitor&mdash;satellite technology that helps countries detect illegal fishing. We also hear from Sandy Davies of Stop Illegal Fishing, who works with FISH-i Africa, a network of African nations committed to ending illegal fishing. To learn more, visit pewtrusts.org/afterthefact.

How Interpol's Project Scale Is Helping to Curb Illegal Fishing

Coordinated efforts by the international police agency Interpol and partners around the world helped set the stage for the dramatic sinking of the notorious illegal fishing vessel&nbsp;Thunder&nbsp;on April 6, 2015, in the waters off the West African island nation of S&atilde;o Tom&eacute; and Pr&iacute;ncipe. Those efforts also led to the arrest and conviction of the vessel&rsquo;s captain and crew for crimes related to illegal fishing.