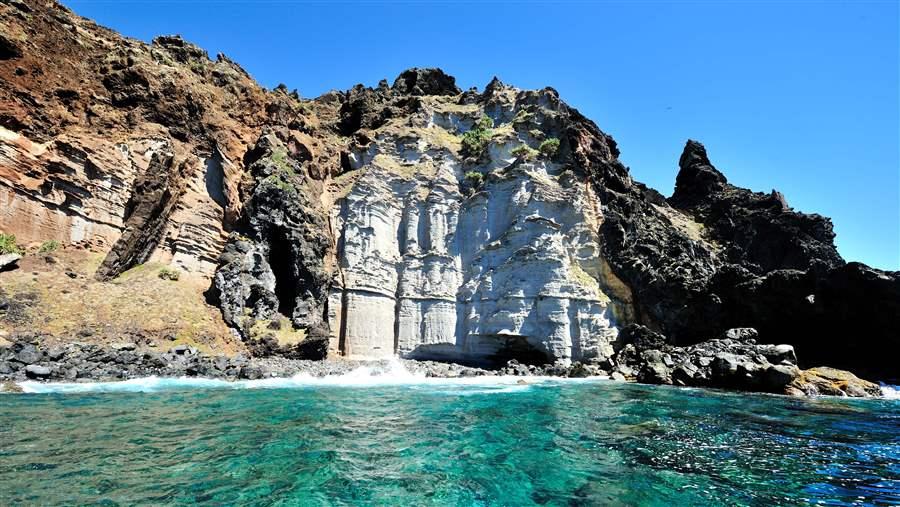 The U.K. government announced designation of the Pitcairn Islands in March 2015, contingent on the ability to put in place an effective monitoring system.

Located in the middle of the South Pacific Ocean, the Pitcairn Islands are a British Overseas Territory and, as of August 2016, home to one of the world’s largest fully protected marine reserves. The Pitcairn Islands Marine Reserve, almost 3.5 times the size of the United Kingdom at about 830,000 square kilometres (320,465 square miles), serves as a habitat to at least 1,249 species of marine mammals, seabirds, and fish. It safeguards one of the most pristine ocean environments on Earth. But even for wealthy nations, enforcement of reserve rules—such as prohibitions on commercial fishing and seafloor mining—in such a remote area is challenging and expensive. To address that issue, new methods and cutting-edge technologies have been used to develop an enforcement strategy for this reserve. 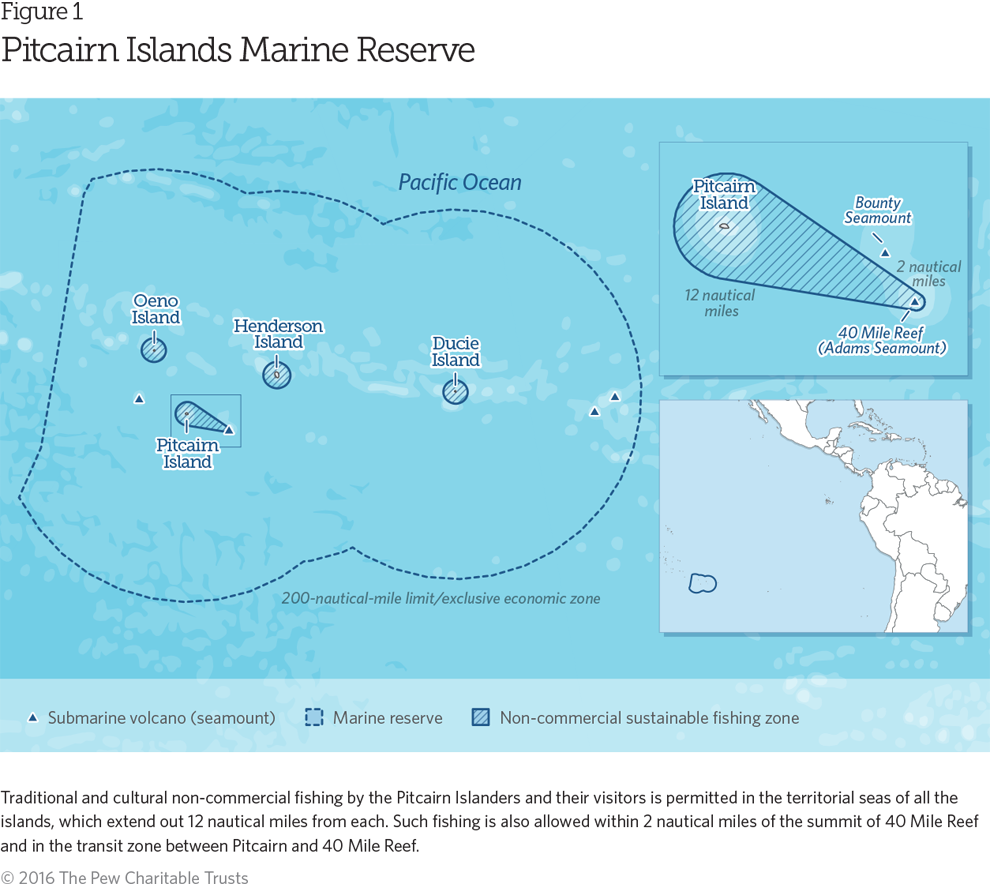 The U.K. government announced designation of the marine reserve in March 2015, contingent on the ability to put in place an effective monitoring system. That initial decision came after several years of environmental research and advocacy by The Pew Charitable Trusts and partner nongovernmental organizations, working with the Pitcairn Island Council and the British Foreign and Commonwealth Office (FCO). Traditional approaches to maritime surveillance, such as aircraft and patrol vessels, posed inherent challenges in effectiveness and cost when managing a marine reserve in such a distant location, roughly between South America and Australia.

The government wanted to test a new method of enforcing the marine reserve’s boundaries and turned to Project Eyes on the Seas, an integrated platform that makes use of multiple data sources to analyze and interpret vessel behavior. The announcement of this new surveillance approach in early 2015 marked the first time a government combined designation of a marine reserve with a detailed strategy for remote monitoring and enforcement. This set a high standard for surveillance of remote marine protected areas. The test was successful and bolstered the case for designating the reserve.

The reserve’s waters encompass 99 percent of the Pitcairn Islands’ exclusive economic zone (EEZ). Residents can still engage in sustenance fishing within 12 nautical miles of the islands’ coasts. All commercial extractive activity is prohibited in the EEZ.

The monitoring trial took place from Jan. 1, 2015, through March 31, 2016. The British government and its partners wanted to determine the extent of potential illegal activity taking place in the territory’s waters and to verify that the technology could monitor a remote reserve of this size to enable effective enforcement. The FCO will coordinate development of a long-term surveillance plan using the trial findings.

The reserve’s waters encompass 99 percent of the Pitcairn Islands’ EEZ. 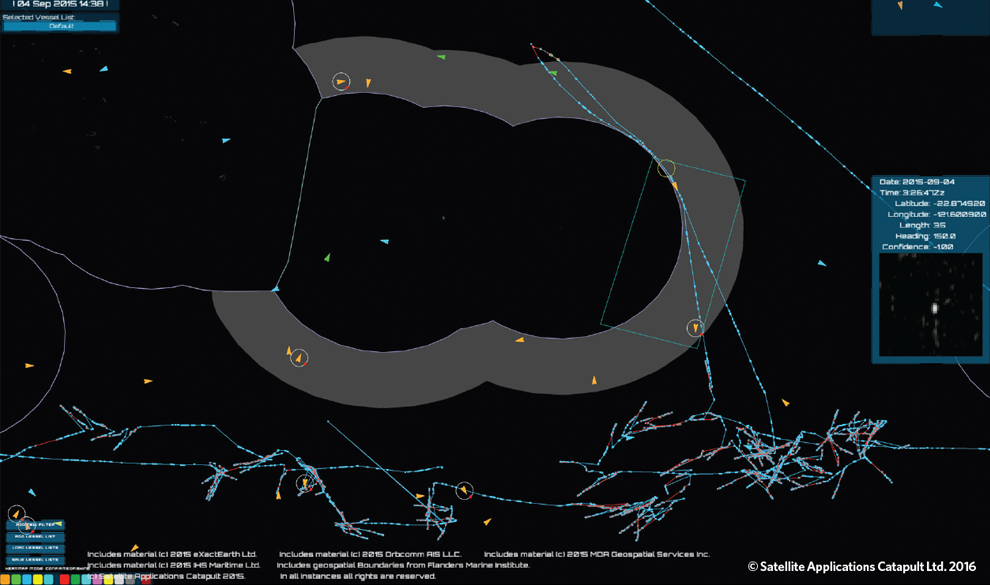 Project Eyes on the Seas: The trial

The British government partnered with Pew, U.K.-based Satellite Applications Catapult, and the Swiss-based Bertarelli Foundation to conduct the trial. The Bertarelli Foundation provided funding to test a Wave Glider SV3, a floating drone developed by the U.S.-based Liquid Robotics, to gather information from the water’s surface to be incorporated in the analysis and to demonstrate that third-party information can help enhance identification of vessels in the protected area.

Project Eyes on the Seas is a cutting-edge technology platform that combines satellite monitoring and imagery data from Automatic Identification Systems (AIS), Synthetic Aperture Radars (SAR), and electro-optical (EO) satellites. AIS is technically intended to help larger vessels avoid collisions and is mandatory for commercial vessels over 300 gross tonnes. Though not required for fishing vessels, many larger ones are equipped with the system. SAR, meanwhile, generates remote sensing imagery using satellite-based radar and cameras to find vessels not employing AIS. In the trial, images from the SAR system were used to help target EO satellites to take pictures of areas where suspicious vessels appeared to be operating.

The data collected is cross-referenced with external information from such sources as license lists maintained by regional fishery management organizations (RFMOs), fishing vessel databases, and oceanographic information to identify vessels and alert officials to suspicious activity. Data from the RFMOs in the region can help verify vessel type and other identification details, and provide information on whether a vessel has complied with fishery measures.

In the trial, images from the SAR system were used to help target EO satellites to take pictures of areas where suspicious vessels appeared to be operating.

Algorithms and alerts help identify vessel movements to determine whether the behaviors observed are consistent with fishing activities. Once the layers of data are integrated, optical satellites can capture images, allowing analysts to isolate suspicious vessels that might otherwise remain unseen.

In the 13-month trial, Project Eyes on the Seas monitored the marine reserve for a total of more than 10,000 hours. During this time, AIS tracking detected 574 vessels within the Pitcairn EEZ as well as in a 100-mile buffer zone beyond those waters. Fewer than a third—29 percent—proved to be fishing vessels. This percentage fluctuated with the fishing seasons for different migratory species. Of the total number of vessels seen, only eight were referred to the U.K.’s FCO for further investigation because of potential prohibited activity within the EEZ; another 18 were flagged to determine if illegal fishing had taken place.

The monitoring identified up to 12 “dark vessels”—vessels that could not be detected using AIS alone—which were reported to the FCO. The ability to find these vessels highlights the unique capability of the Project Eyes on the Seas platform. The system integrates and correlates multiple data sources—from license lists to satellite-derived information to radar—that then can be assessed by trained analysts. The added ability to draw on remote sensors, such as Wave Glider, allows photographic identification back to a ship’s name or flag—one step further than satellite images. Other monitoring technologies cannot reach this level of detail, making it less likely that they can identify or locate fishers trying to hide from authorities.

The outcomes of this trial revealed that the Pitcairn Islands’ EEZ is a high compliance area, meaning that a relatively low level of illegal activity occurs there. Although some suspicious patterns were detected in the buffer zone, none of the vessels tracked within the Pitcairn EEZ showed behavior typical of illegal fishing operations. 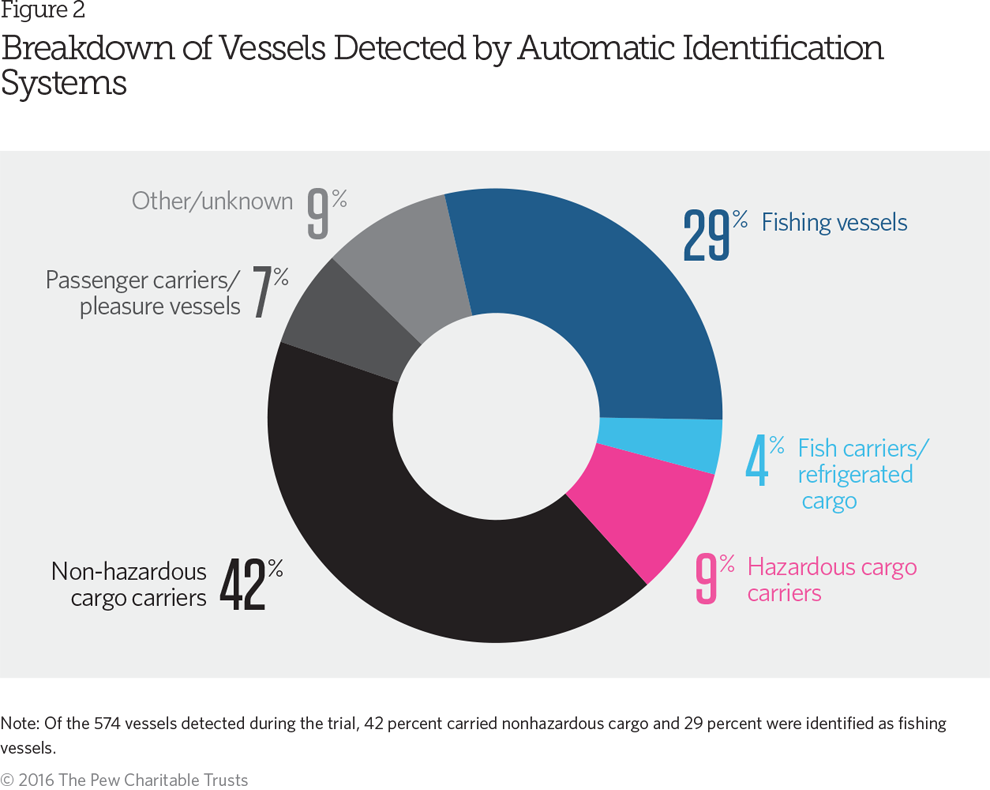 The 13-month trial monitoring the waters of what is now the Pitcairn Islands Marine Reserve achieved three significant goals. The joint effort:

The system integrates and correlates multiple data sources—from license lists to satellite-derived information to radar—that then can be assessed by trained analysts.

The successful trial here could lead to similar efforts elsewhere. The U.K. established the Chagos Marine Reserve in the British Indian Ocean Territory in 2010 and pledged protections for the waters of Ascension Island in the Atlantic Ocean in January 2016. Doing so demonstrated leadership in the global movement to safeguard critical ocean habitat. The lessons from this trial can now be used to help the British government complete implementation of its ambitious Blue Belt policy, the initiative intended to enhance marine conservation in the nation’s 14 overseas territories.