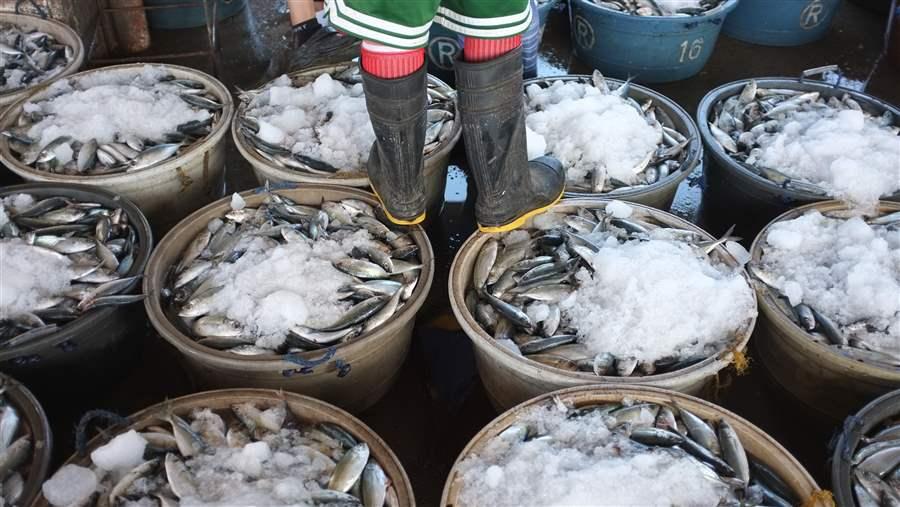 Each year, up to 26 million tons of fish are stolen from our seas. That’s 1 in every 5 fish sold at market. Illegal, unreported, and unregulated (IUU) fishing is a major threat to the world’s oceans, depleting already dwindling fish populations and threatening the economies and food security of communities that rely on fish.

Eliminating IUU fishing is becoming a priority for international seafood buyers. Industry players realize that this practice threatens the sustainability of the seafood their customers demand and robs legitimate fishers of income.

Ports of landing have traditionally been a weak point in the global fight against IUU seafood, but this is changing. By supporting strong port controls, the seafood industry can give assurance that it is not inadvertently contributing to illegal fishing. 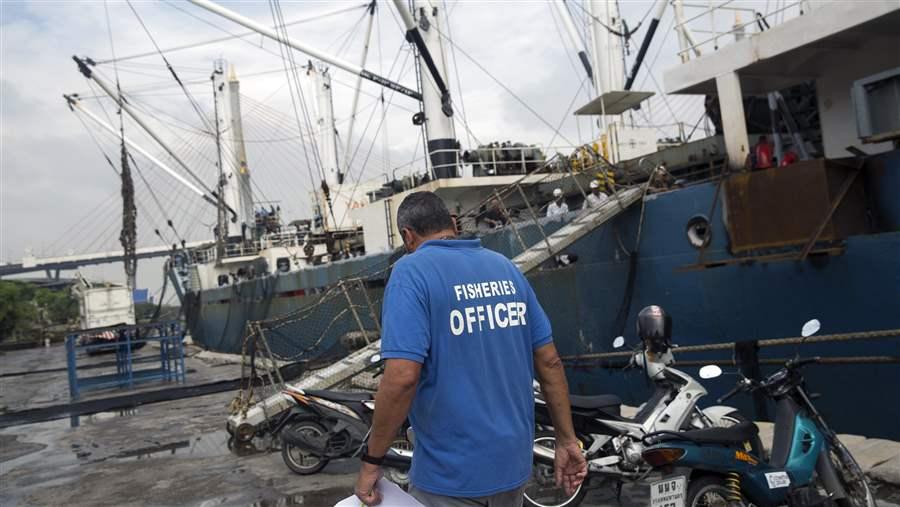 IUU fishers rely on a range of tactics and loopholes in national law and procedures to get their product to market. Ports known for lax law enforcement or limited inspections are a prime pathway for illegally caught seafood to enter the supply chain. Regulations governing which ships can enter and use ports, and proper inspections when vessels first land or transship fish, known as port controls, are critical to preventing illegal operators from getting their catch from ship to shelf.

The key instrument in ensuring adequate port controls is the 2009 Food and Agriculture Organization of the United Nations Agreement on Port State Measures to Prevent, Deter, and Eliminate Illegal, Unreported, and Unregulated Fishing—known as the Port State Measures Agreement or PSMA. The pact came into force in June 2016, when more than 25 parties had joined it. It is the first internationally binding treaty aimed at combating IUU fishing.

The PSMA requires countries to exert greater controls on foreign-flagged vessels seeking to enter and use their ports. Operators must submit a request to authorities in these States when they want to land or transship catch. The authorities may refuse entry to vessels known to have engaged in illegal fishing, or immediately inspect them and block their access to port services.

By supporting strong port controls, the seafood industry can give assurance that it is not inadvertently contributing to illegal fishing.

The results of these inspections are communicated to other relevant States and organizations to facilitate cooperation in enforcement actions. While the PSMA focuses on foreign-flagged vessels, parties to the agreement are expected to bolster port controls overall, including on domestic vessels. If they follow through, operators who fish illegally will have much less incentive to continue their activities—and their catch will not enter the world market.

The number of parties to the PSMA continues to grow, and the agreement is proving to be a cost-effective tool for combating illegal fishing globally. This is especially relevant because conventional methods of enforcement are prohibitively expensive and require extensive labour. States that join the treaty are sending a clear signal to the international community that they are dedicated to fighting illegal fishing and that their ports are no longer open to illegal seafood.

States that join the treaty are sending a clear signal to the international community that they are dedicated to fighting illegal fishing and that their ports are no longer open to illegal seafood.

How industry can help

Application of all PSMA requirements is a critical part of fighting IUU fishing. When buyers conduct due diligence, their risk assessment criteria should include whether the port State has procedures to identify suspicious vessels and block them from its ports, standards for port inspections and the capacity to carry them out, and channels to share information with other regional and international agencies.

Seafood buyers should also consider working with suppliers to improve the implementation of port State measures by: 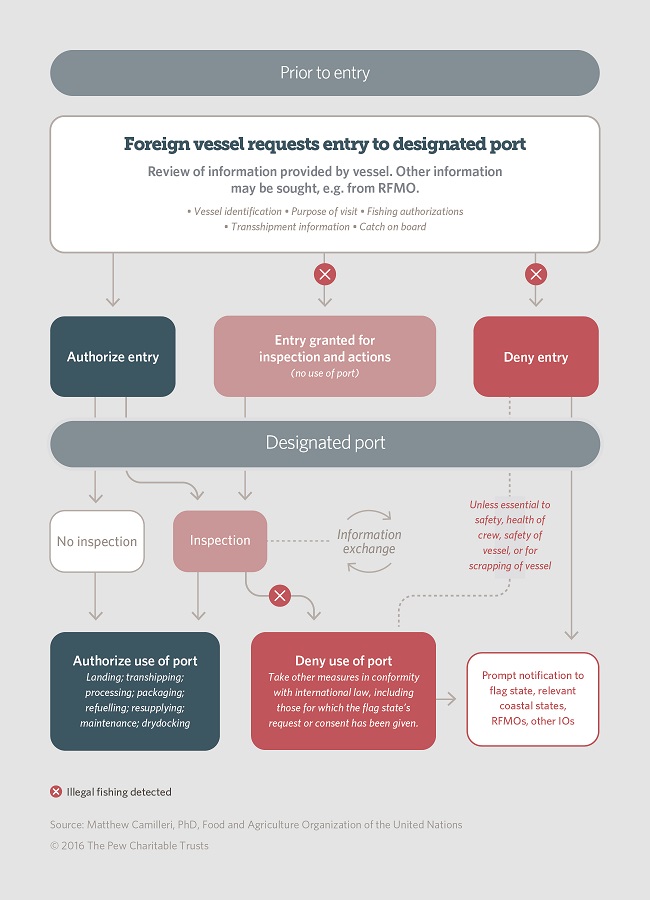 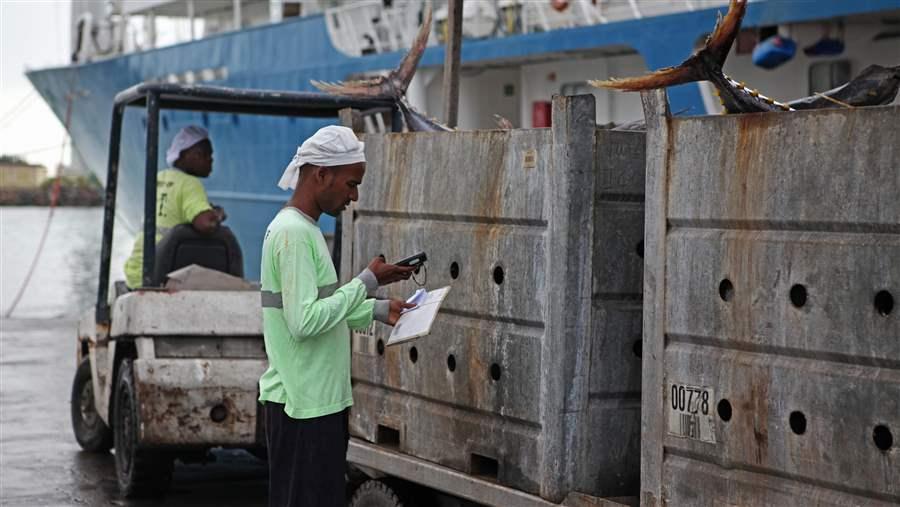 Seafood buyers have an important role in determining how effective the Port State Measures Agreement will be in eliminating illegal fishing. While more governments must ratify and implement the agreement, buyers can raise awareness of problems that should be addressed and advocate for the treaty’s effective application.

By working collaboratively with governments and intergovernmental and non-governmental organizations, seafood buyers can help tackle illegal fishing from all angles. They have a strong incentive: Consumers are becoming increasingly aware of how their seafood is sourced, prompting buyers to take the necessary steps to assure their customers that their products are sustainable.

By asking questions and advocating for improvements in the ports where their seafood is landed, seafood buyers can reduce their risk of trading in IUU seafood and limit the number of ports where fishers can offload their illegal catch.