In maritime security circles, the stories are legion: illegal fishing vessels loaded with high-value Patagonian toothfish (also called Chilean sea bass) outrunning authorities in the Southern Ocean; poachers brazenly taking 300 tons of sharks from a Galapagos Island marine reserve; and crew members, under hot pursuit from an Australian patrol boat, leaning over their ship’s rail to paint a new name on the hull, knowing that the identity change would be enough to evade prosecution for unlawful fishing.

Throughout most of history, illegal fishers have roamed the world’s ocean, plundering with little fear of being caught or punished. The reasons for this include a shortage of surveillance and enforcement resources that leaves many countries vulnerable to poachers; complicit or understaffed ports; and a lack of communication and international law that allows countries to duck accountability when their vessels fish illegally.

Illegal fishing accounts for up to $23.5 billion worth of seafood every year, or around 1 in 5 fish taken from our oceans.

The crime robs coastal communities of jobs and income, exacerbates the consequences of overfishing, and harms the marine environment. Lawbreaking crews use banned gear, take protected species, or fish in closed areas.

Now a new platform called Oversea Ocean Monitor, which was developed by The Pew Charitable Trusts and the U.K.-based firm Satellite Applications Catapult, enables countries to monitor activity in their waters or in the high seas using the vast reach of satellites combined with data on fishing vessels’ ownership, licensing, history, and more. 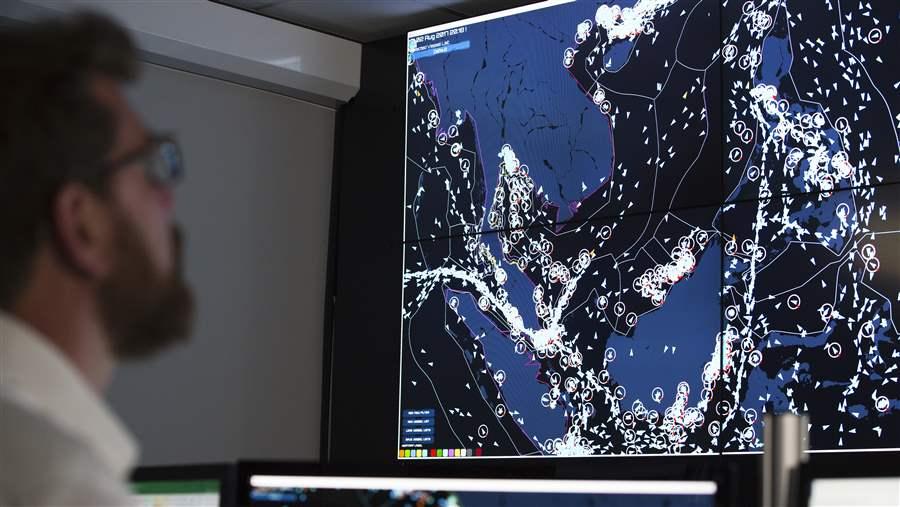 An algorithm processes all of these details to help analysts at OceanMind, the British nonprofit organization that manages Oversea Ocean Monitor, focus their attention on suspect ships—those that, for example, might be fishing in marine reserves or shutting off their transponders in an attempt to poach undetected. The platform can also alert analysts to vessels with a history of fishing illegally and give authorities actionable information so they can investigate further.

As Nick Wise, founder and head of business at OceanMind, says, “We bring all of the data into it that a fisheries analyst might need in order to undertake a compliance assessment,” accomplishing in minutes a task that would otherwise take days or even weeks. “I firmly believe that technologies such as the ones we've developed here are going to be contributors towards solving these global problems.”

Oversea Ocean Monitor has been used to monitor waters around the Pitcairn Islands, a British overseas territory in a remote area of the South Pacific Ocean, through a partnership between the government there and the industry-led nonprofit Seafood Task Force. Chile, Costa Rica, Ecuador, and Thailand are also using the platform and the island nation of Palau, which has made fighting illegal fishing a top priority, will soon start employing it.

This is just the latest advancement in the global fight against illegal fishing.

The Port State Measures Agreement, an international treaty aimed at stopping illegal fish from entering ports, has been ratified by dozens of governments. Many countries and fishery management bodies now require every large vessel to have a unique International Maritime Organization number, similar to a serial number, which makes it nearly impossible for owners to dodge accountability by changing a boat’s name or flag of registration.

And Interpol is entering the fifth year of Project Scale, which helps the international police organization’s 192 member countries share intelligence on alleged illegal fishers and has helped authorities catch and prosecute violators.

Oversea Ocean Monitor is a critical component of the burgeoning global effort to end illegal fishing. If more countries put the platform into use, and adopt and implement the other elements of a comprehensive strategy against unlawful fishing, poachers will have to work so hard to catch and sell illegal fish that they won’t be able to profit, and the crime will no longer be worth their time.