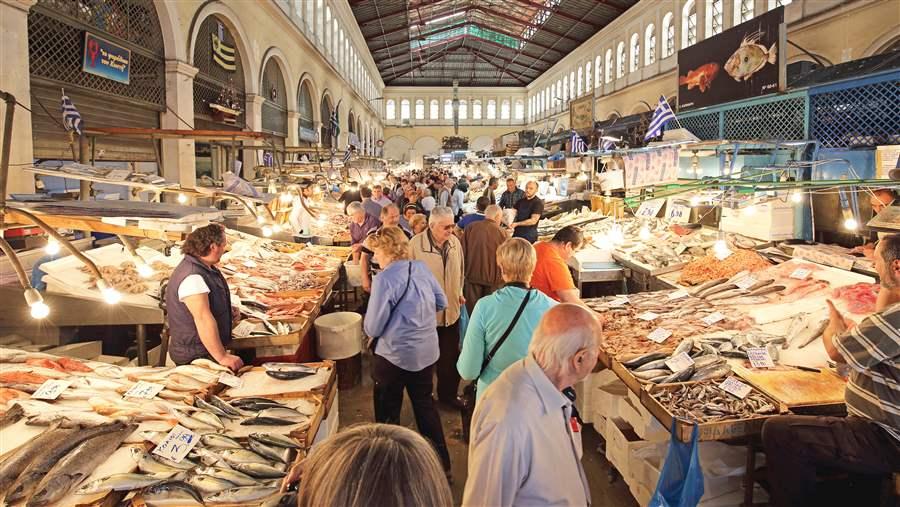 Seafood, from both wild and farmed sources, is the most valuable food commodity in the world, accounting for nearly $150 billion in global trade per year.

We have written before about how the increasing global demand for seafood poses challenges for fisheries management. We've also addressed how illegal fishing is compounding those issues, degrading important marine ecosystems, and harming coastal residents and law-abiding fishers around the world.

And until now, The Pew Charitable Trusts’ work to stop illegal, unreported, and unregulated (IUU) fishing has focused mainly on engaging governments to better enforce existing policies at sea and in port, improve fisheries law to close the loopholes that bad actors have exploited for decades, and impose meaningful penalties on those convicted of IUU fishing. But there is still work to be done.

We are now extending our efforts into the wholesale and retail seafood markets with the goal of stopping the sale of illicitly caught fish throughout the supply chain. Seafood, from both wild and farmed sources, is the most valuable food commodity in the world, accounting for nearly $150 billion in global trade per year, a number that has increased annually by 8 percent since 1976.

Although many governments, fisheries authorities, and conservation groups are making real progress in the fight to reduce IUU fishing, it is still estimated to account for up to $23.5 billion worth of seafood each year. A recent study by the Stockholm Resilience Centre estimated that up to 40 percent of trade in the largest and most valuable seafood stocks is controlled by only 13 corporations, so it is clear that cracking down on illegally caught seafood in the supply chain could lead to significant reductions in IUU fishing. Essentially, if the market won’t buy ill-gotten fish, then the bad guys won’t be able to sell it. And that will force them to either quit their practice or fish legally.

Pew’s ending illegal fishing project works with seafood companies to stop illegally caught fish from entering the supply chain. By engaging with retailers, processors, and the food service sector, we hope to build consensus among those businesses on how to keep illicit catch off the shelf.

Retailers and seafood buyers have the purchasing power to influence other sectors, including processors and wholesalers, to ensure that the fish they process and sell is legally sourced. All of these stakeholders can also engage with governments to advocate for the passage and effective implementation of strong fishery laws.

Over the next few years, we hope to help retailers assess their supply chains to weed out any illegally caught seafood. We also aspire to develop simple assessment and tracking tools, risk calculators, and performance tables for both flag and port States so that businesses throughout the supply chain know with certainty where, and by whom, the fish they sell was caught. One piece of this would be a method for buyers to easily verify that their product comes from vessels that are in compliance with flag and port State requirements.

By encouraging retailers and other seafood buyers to support and implement policies to address IUU fishing, we can drive positive change for the future health of our ocean and law-abiding fishers.

Recommendations for the 32nd UN Committee on Fisheries meeting

International fisheries play a critical part in ensuring food and economic security around the world. Still, many fish populations are not managed according to scientific advice and best practices, a reality that is taking a toll on many important marine species.