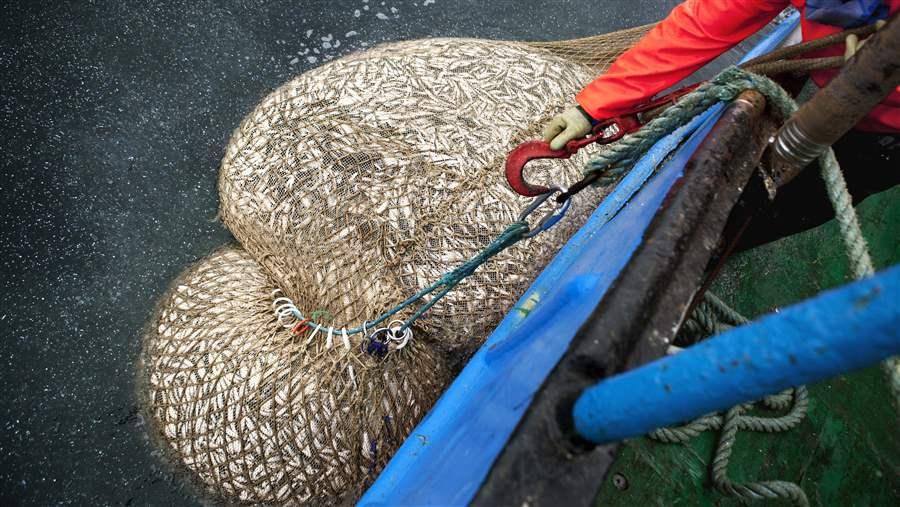 A fisherman in Poland prepares to haul nets out of the water. Despite a legally binding commitment to end overfishing by 2020, EU fisheries ministers continue to set many fishing limits above scientific advice.

Although the European political landscape is undergoing historic change, one of the region's most solvable problems—overfishing—is proving persistent. In the past few years, European fisheries ministers have set about half of the region’s fishing limits above the levels advised by scientists. And this year was no exception. That pattern doesn’t bode well for the commitment made by European Union member states to end overfishing of all fish stocks, which they promised to do by 2020 under the 2013 reform of the EU’s Common Fisheries Policy (CFP).

The legally binding commitment was among the most lauded of the 2013 reforms to the CFP, which until then was widely perceived as failing to effectively manage fish stocks. The change bound fisheries ministers to end overfishing “by 2015 where possible” and by 2020 at the latest, using “progressive, incremental” adjustments to fishing limits.

That language, finally codified in EU law, reflects decades-old commitments made by member states through United Nations agreements. Fisheries ministers of the 28 EU member states joined members of the European Parliament (MEPs) and European Commission officials in hailing the CFP revisions as a huge step forward.

But four years later, it is clear that ministers have not made sufficient progress toward the end goal. With the “softer” 2015 deadline long since passed, they have only three more annual cycles of decisions on fishing limits in order to achieve the hard deadline to end overfishing by 2020. So what did the ministers decide this year?

I wrote previously about the unnecessarily opaque and politicised process by which ministers decide on catch limits in late-night sessions behind closed doors. This process makes it incredibly difficult for the public to understand the figures or how they were agreed upon.

Science ignored in more than half of decisions

To shine more light on this process, The Pew Charitable Trusts recently published an analysis that summarises this year’s decisions. The document is the result of a painstaking process through which we used publicly available information to compare the limits the ministers agreed to in December with the scientific advice. 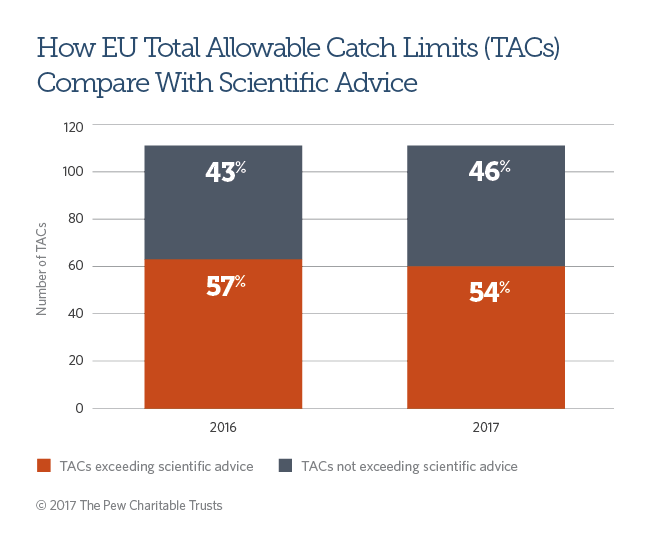 The conclusions are disheartening. Our analysis found that, overall, 54 percent of limits set by the Fisheries Council exceeded the maximum levels of fishing that scientists advised, only a marginal reduction on last year’s proportion. For many stocks, the Council knew the fishing rates that would deliver maximum sustainable yield, the key CFP benchmark in setting quotas. In those cases, ministers still set 45 percent of limits above the scientific advice—almost no progress from last year’s 46 percent for those catch limits.

This is certainly not the “progressive, incremental” change required by the CFP. And this inertia means that EU member states continue to lose out on the benefits of ending overfishing, which are estimated at more than $80 billion per year globally. As in recent years, the European Commission and numerous ministers issued upbeat press releases after this year’s decisions, with confident rhetoric about progress that belies the scientific data. The gap between those public statements and reality risks becoming unbridgeable as 2020 approaches.

The decision-making cycle for setting 2018 fishing limits begins almost immediately. The Commission normally reports on the state of stocks and progress in setting sustainable fishing limits in June each year. Under the Lisbon Treaty, MEPs do not have a formal role in setting annual fishing limits, but they do have a vital responsibility to ensure that all fishing laws meet the requirements of the CFP. MEPs also play a formal part in determining, with the Council, multi-annual plans for managing regional fish stocks. These important tools are intended to curb the focus on short-term goals that ministers typically display in their annual decisions on catch limits.

EU fisheries ministers are continuing to delay progress on ending overfishing and are postponing critical decisions for the final years leading up to 2020. There is still hope that the EU will meet the goals laid out in the CFP. The next indicators of how that might play out will come in this summer’s Commission communication and MEPs’ attention to the findings as they negotiate the next multi-annual plan for fish stocks in the North Sea. Pew encourages the Commission, MEPs, and the ministers to get this right, before time runs out.