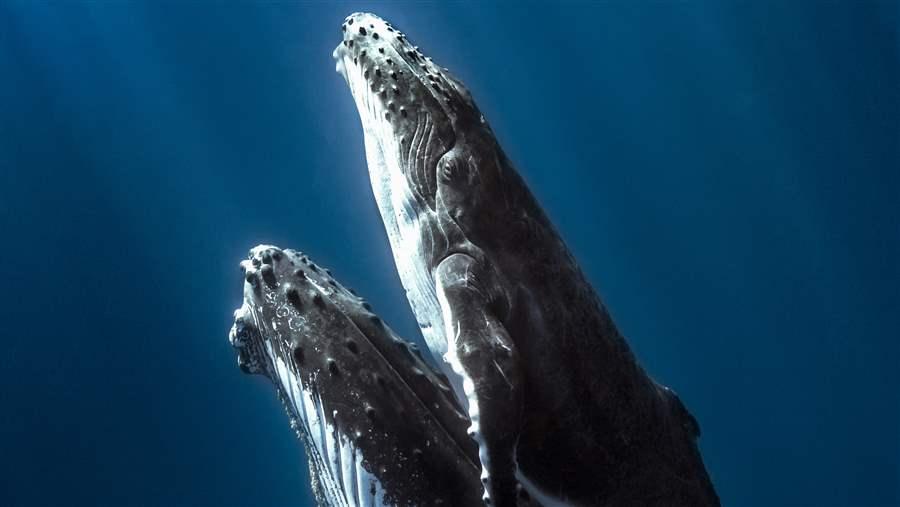 The high seas are home to vast biodiversity, including highly migratory and charismatic species such as humpback whales.

All those with a stake in protecting the global ocean will be closely watching the next meeting of a U.N. Preparatory Committee (PrepCom) that is charged with developing recommendations for an international treaty to safeguard sea life in areas beyond national jurisdiction, including the high seas. The PrepCom session convenes March 27 to April 7 in New York.

The high seas make up about two-thirds of the world’s ocean, but despite its vast size, no comprehensive global mechanism exists for protecting the life and ecosystems in those waters.

At this PrepCom meeting, the third of four for the committee, members will discuss how to create marine protected areas (MPAs) and how to conduct effective environmental impact assessments on the high seas. Currently, global and regional bodies such as the International Seabed Authority and various regional fisheries management organizations have no formal mechanism to work together to protect these ecosystems, including specific areas of high biodiversity, from the impacts of extractive activities.

The issue of MPAs is of particular importance to these treaty negotiations, because many observers see such areas as a key way for the United Nations to meet its commitments to increase ocean protection. In 2010, through the U.N. Convention on Biological Diversity, governments agreed to safeguard at least 10 percent of marine and coastal areas—in ecologically representative and well-connected systems of protected areas—across the globe by 2020. Then in 2015, the body adopted “conservation and sustainable use of the oceans” as one of its Sustainable Development Goals. Building on these commitments, in 2016 the International Union for Conservation of Nature’s World Conservation Congress called on governments to protect at least 30 percent of the ocean and to include areas of the high seas in that conservation.

The upcoming PrepCom comes during a period of intense international focus on how to manage ocean resources. In June, the governments of Fiji and Sweden will co-host The Ocean Conference in hopes of identifying new partnerships and opportunities to advance the conservation and sustainable use of the oceans. Then in July, PrepCom members will meet for the fourth and final time to finalize recommendations to the U.N. General Assembly for marine conservation on the high seas.

In the run-up to the imminent PrepCom meeting, governments have participated in a series of workshops around the globe, including in the Caribbean, Latin America, Europe, and Southeast Asia. Also, in January the U.N. General Assembly president appointed a new PrepCom chair, Ambassador Carlos Duarte, the deputy permanent representative of Brazil to the United Nations, to guide the upcoming discussions and, ideally, produce the recommendations to protect high seas biodiversity that the U.N. General Assembly needs to launch formal treaty negotiations in 2018.

The PrepCom will issue recommendations to the General Assembly, which must decide by September 2018 whether to move forward with an intergovernmental conference to negotiate the text for a treaty. With a fully developed and implemented high seas agreement, including provisions for establishing MPAs, the U.N. would take a big step toward fulfilling its commitment to better protect the ocean.