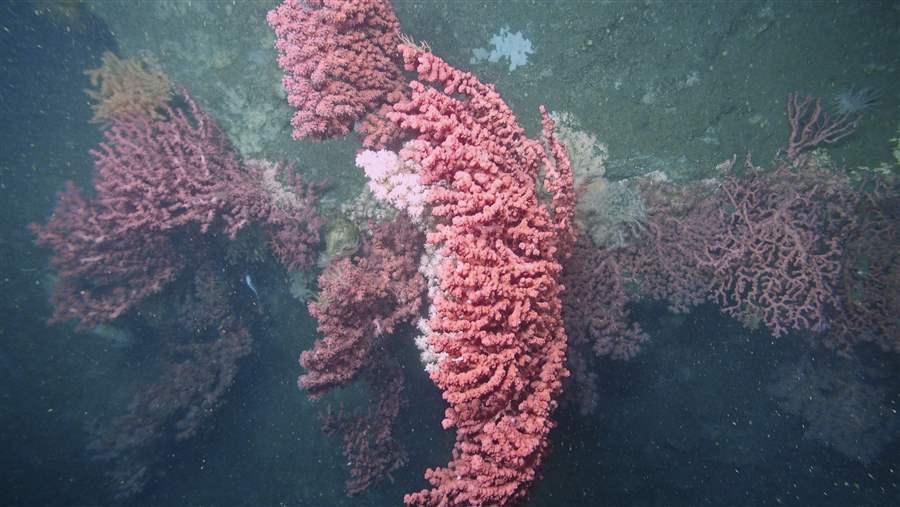 Bubblegum corals grow on a rocky wall in the deep waters in the U.S. Atlantic. Deep-sea corals provide important fish habitat but are sensitive to damage and very slow to recover.

Less than 100 miles off the New England coast, the seafloor begins to drop steeply, transitioning to a rich deep-sea ecosystem that supports a diverse array of marine life. Slow-growing corals are the vital foundation of that productive offshore habitat—and today the New England Fishery Management Council passed a measure to protect more than 25,000 square miles of the deep-sea floor from the most destructive kinds of fishing gear.

A new report from the National Oceanic and Atmospheric Administration (NOAA) underscored that deep-sea corals support healthy marine wildlife and emphasized why it is essential to keep that foundation intact. By voting to protect much of New England’s remaining deep-sea coral, the council took a major step toward sustaining and rebuilding ocean health in an area that endured the collapse of the cod population and faces emerging challenges from the impacts of climate change.

The council had narrowed its options to two measures to protect coral habitat from bottom trawling, which involves dragging weighted nets along the seafloor, and from dredging.

Although the council could have chosen stronger protections, the measure marks a major expansion of coral habitat shielded from dredging and dragging. NOAA will now judge whether the council sufficiently considered scientific advice and did enough to safeguard deep-sea coral. 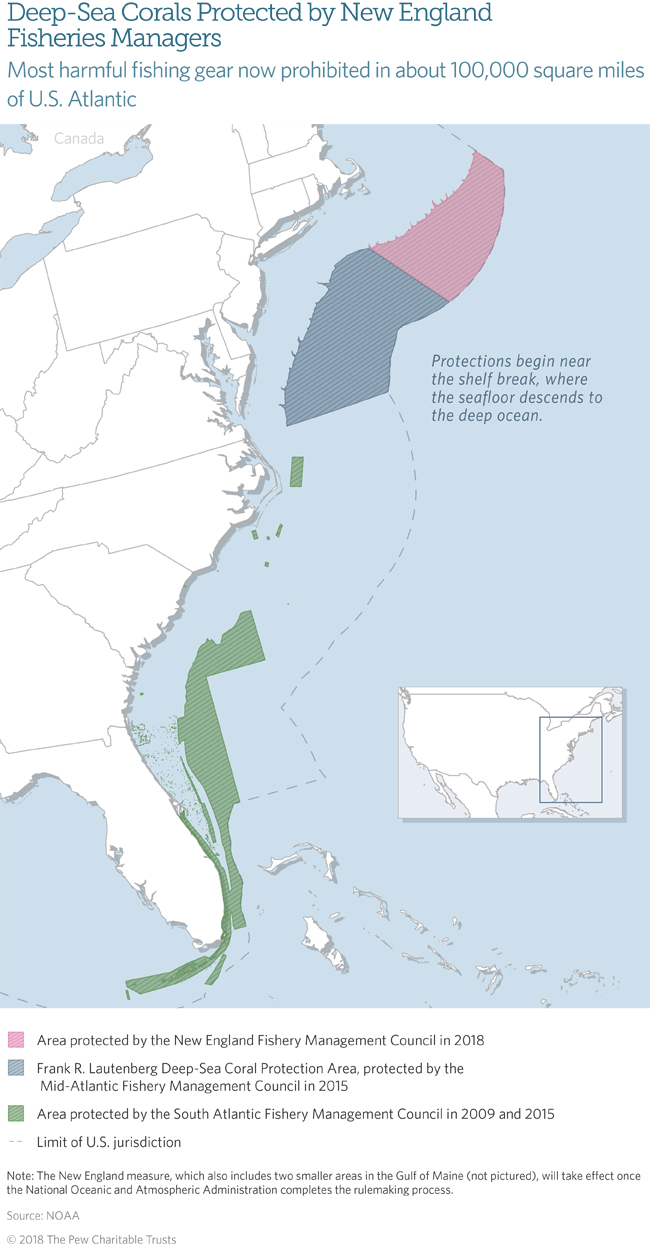 The council’s decision follows similar actions by the Mid-Atlantic and South Atlantic fishery management councils. When today’s measure takes effect—after NOAA completes its formal rule-making process—almost 100,000 square miles of deep-sea coral habitat from the border with Canada to the tip of Florida will be protected.

Corals form the largest living structures on Earth, and although they are animals they are often compared to old-growth forests because of their long lives and how much biodiversity they support. Deep-sea corals grow slowly in cold water and are highly vulnerable to damage from fishing, mining, and other human activities. Once damaged, they can take many years to recover, if they rebuild at all. That’s why it is essential to protect them before they are harmed, rather than attempting to restore them afterward.

The newly protected area starts near the shelf break—where the seafloor descends to the deep ocean—and extends seaward to the outer boundary of the U.S. exclusive economic zone. Its closest point to shore is about 90 miles off Nantucket, Massachusetts. It ranges in depth from about 600 meters (1,969 feet) to more than 2,000 meters (6,562 feet).

The measure prohibits lobster and Jonah crab fishing and the use of mobile bottom-contact gear, like bottom trawls, throughout the area. Fishing with gear that does not contact the seafloor, including recreational fishing, is still allowed.

These safeguards differ from those in the 4,913-square-mile Northeast Canyons and Seamounts Marine National Monument, which partly overlaps with the new protected area. In the monument, all forms of commercial extraction are prohibited except for existing red crab and lobster fishing, which was permitted to continue for seven years after the monument’s creation in 2016. Protecting some special ocean areas completely and permanently, as marine monuments do, makes scientific and economic sense. By contrast, the New England Fishery Management Council has the authority only to limit fishing, and its decisions are not permanent. The Pew Charitable Trusts remains steadfast that the boundaries and protections of the marine monument should remain as they were designated.

Today’s decision continues the momentum to protect sensitive habitat that we can’t afford to lose. As more Americans recognize that protecting habitat before it is damaged is far superior to restoring it afterward, we hope science will be the guide for this council and others around the country.

Why We Need to Protect Deep Sea Corals Now

Healthy fisheries depend on the ecosystems these slow-growing, vulnerable species build

In June, after centuries unseen by human eyes, deep-sea corals in the dark ocean off New England finally had their moment in the spotlight. Underwater robots operated by a team of American and Canadian scientists illuminated dense forests of corals, including spectacular specimens that are likely many hundreds of years old.