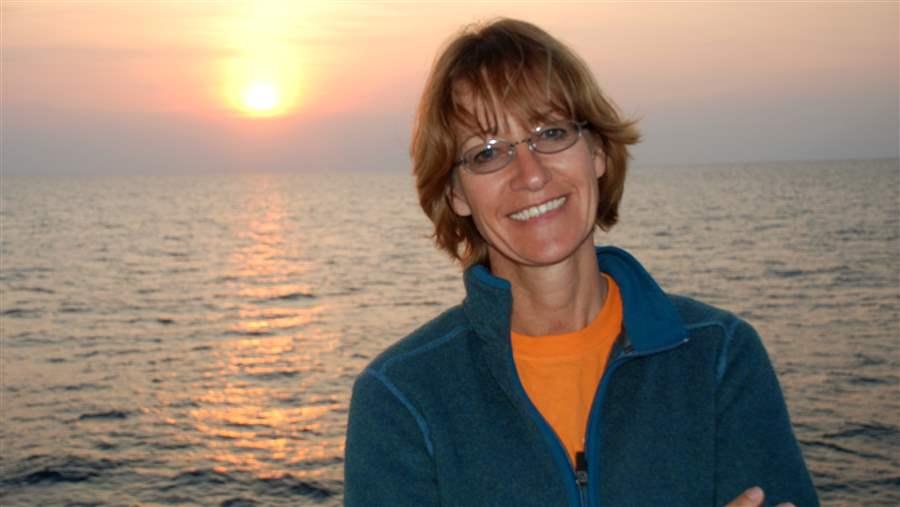 Sandra Brooke, a coral researcher at the Coastal and Marine Laboratory at Florida State University, studies corals in the deep ocean.

Q: How did you end up studying corals?

A: My first career, in pest and disease control, took me to the Cayman Islands, where I learned to dive and volunteered for the natural resources department. I was captivated by the corals, rather than the fish and crustaceans that seem to attract other people. It’s fascinating how a tiny, simple animal can create massive geological structures. At night, coral polyps look like fragile flowers, but they are actually voracious carnivores, grabbing plankton from the water to eat. My professional work on corals started as a lucky accident: I was studying a species of deep coral for my Ph.D. in Florida during a surge of interest about deep-sea corals in Europe, which trickled over to the U.S. After I graduated, I managed to continue working with them. That was over a decade ago. 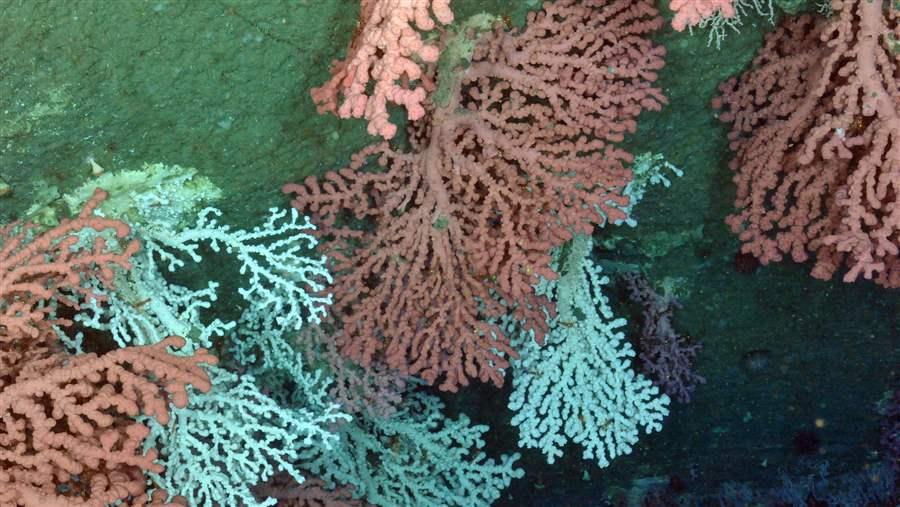 Large colonies of bubblegum corals grow on the walls of Corsair Canyon, an area east of Cape Cod and south of Nova Scotia, in Canadian waters.

A: The main reef-building species in the deep waters of the Atlantic is a white, branching stony coral, which forms large, complex colonies. After you descend through the dark water column to the seafloor, the first thing you see might be a brilliant white of the reef appearing out of the gloom, and then dense tangled branches of these live corals come into focus. And you might see large, tree-shaped black corals, and octocorals (sometimes called sea fans) in bright colors like orange, yellow, and pink, scattered along the reef or attached to rocks nearby.

Deep-sea coral polyps are usually open—unlike shallow ones that generally only open at night—and they look like thousands of tiny anemones. You might see sponges in weird shapes and colors and the eggs of octopuses and squid or tiny animals nestled in them. The large sea fans could be swaying in the current, and there is constant activity everywhere—small fish, shrimp, crabs, and brittle stars all moving around the corals.

Q: What do we know about deep-sea corals?

A: They’re found in most of the world’s oceans, starting at about 40 meters (about 130 feet) in depth, down to about 3,000 meters (about 10,000 feet), but mostly between 300 and 800 meters (1,000 and 2,600 feet). They often live on exposed rocky areas, like canyons, seamounts, and steep walls of fjords in places like Norway and Chile. Shallow corals have algal cells in their tissues that provide energy, but algae can’t survive in the dark. So deep-water corals feed directly on plankton and organic material, and they need quite turbid areas with high currents to get enough food. Some corals form massive deep-sea reefs or dense gardens, providing habitat for invertebrates and fish, including some that are economically valuable. Deep coral ecosystems are considered biodiversity hot spots and are sometimes called the rainforests of the sea because of the highly diverse and complex land environments they mirror. 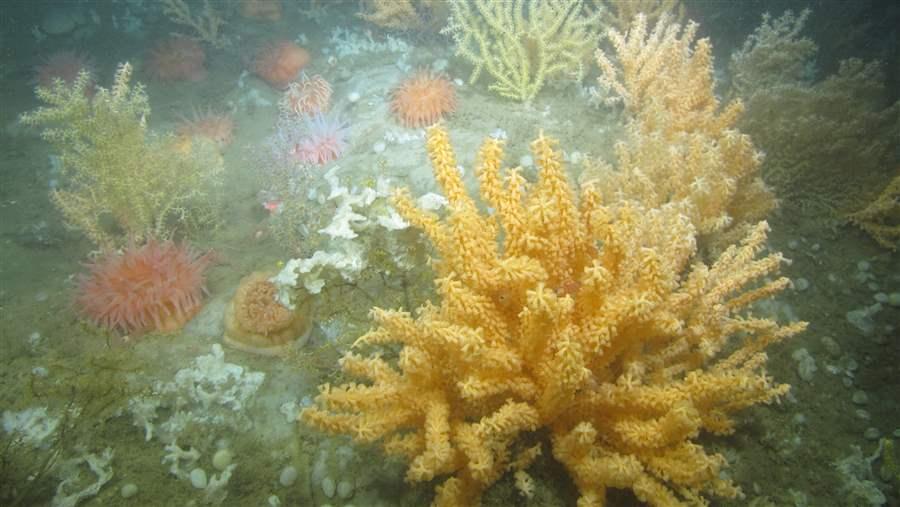 Deep-sea corals, anemones, and sponges in the western Jordan Basin, an area in the Gulf of Maine that descends to about 310 meters (about 1,000 feet) beneath the ocean’s surface.

A: Although they live far from land, the remoteness and depth of deep-sea coral habitats does not protect them from human activity, especially as we use up coastal resources and move further offshore into deeper waters. These corals are very sensitive to fishing gear that contacts the seafloor, and some corals are intentionally collected for jewelry. Damage can also occur from energy industry activities, and a threat is emerging from deep-sea mining for cobalt, which forms the crust of many seamounts where corals live. Animals in cold tend to grow slowly and live a long time. Deep reefs are ancient systems, and some of the corals are thousands of years old. Once damage occurs, recovery is extremely slow or may not happen at all.

Deep coral ecosystems are massive reserves of biodiversity, and more diverse ecosystems—those with many species—are generally better able than less diverse ones to survive in changing or fluctuating conditions. Regulations to prevent physical damage cannot help with impacts from oil spills or climate change, which don’t respect boundaries. With our planet changing quickly, it is increasingly important to protect entire ecosystems to maintain diversity and hopefully resilience into the future.

We know that deep coral communities are an integral part of the larger ocean ecosystem, and removing or damaging deep coral habitats can have impacts that resonate throughout the ocean. Destroying these complex habitats may harm or eliminate sources of food, shelter, or spawning grounds for other animals and may even have implications for human health. Several potential medicines are being developed from deep-sea corals and sponges. If we destroy these communities, we remove the potential to find cures for human diseases.

Q: What’s being done to protect these corals?

A: Deep-sea coral protection varies greatly by location; some countries have no regulations, while others have strong measures to prevent damage to deep coral ecosystems. In the U.S, deep-sea coral measures take the form of prohibiting certain fishing gear in designated areas as well as marine national monuments and national marine sanctuaries that limit fishing and other activities.

The first regional fishery management council to create deep-sea coral protected areas in U.S. waters was the South Atlantic Council. In response to scientists’ concerns about potential fishing impacts on deep-sea corals off Florida, in 2009 the council created five deep coral “habitat areas of particular concern,” encompassing about 23,000 square miles between North Carolina and South Florida, where all fishing gears that contacted the seafloor were prohibited. Since then, the protected area boundaries have been expanded as new areas have been discovered. In 2015, the Mid-Atlantic Council created the country’s largest deep-sea coral protected area, 41,000 square miles of submarine canyons along the continental shelf break and deeper, out to the edge of U.S. jurisdiction, where the use of most types of bottom-tending gear is prohibited.

Now the New England Council is preparing to pass deep-sea coral protections, which will create a nearly continuous protected zone from Florida to Canada. It is an astounding accomplishment, considering the South Atlantic Council put its measures in place only nine years ago.

Q: What strikes you in your studies of deep-sea corals?

A: The size, and therefore the age, of some of the corals surprises me the most. Some of them are massive, well over a meter (3 feet) across. I saw a black coral on a recent cruise that must have been hundreds of years old. It’s been sitting there on a rock for centuries, this beautiful, huge, ancient animal. And all this life is focused around the corals; you zoom in on the branches and see them heaving with small fishes and invertebrates. Several times we’ve see animals normally associated with the surface, like mola mola or swordfish, cruising by a reef hundreds of meters deep. What are they doing at 400 meters? We know a lot more now than we did a decade ago, but science still has a long way to go before we really understand deep coral ecosystems.