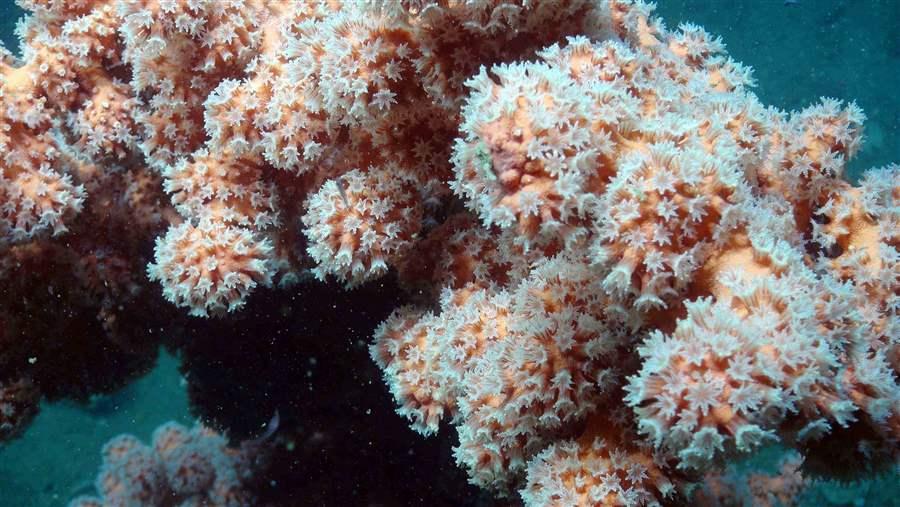 Deep-sea corals, like this giant paragorgia, are now protected from the most damaging types of fishing gear off the coast of mid-Atlantic states. Fishing gear that target fish on or near the seafloor can also destroy corals.

For a deep-sea coral that can survive for centuries, not every day is remarkable. But today is special for those corals that live in the deep waters off the U.S. mid-Atlantic states.

The colorful, fragile marine animals are now part of the Frank R. Lautenberg Deep-Sea Coral Protection Area, under a rule drafted by the Mid-Atlantic Fishery Management Council and issued by the National Oceanic and Atmospheric Administration (NOAA). The measure takes effect today.

At more than 40,000 square miles, it is the largest protected area in the U.S. Atlantic, beginning where the seafloor reaches 1,500 feet deep and extending to the outer boundary of the U.S. exclusive economic zone, 200 miles offshore. This area parallels the coast from New York to Virginia, coming within about 55 miles of land at its closest point. The regulation prohibits the use of most bottom-contacting fishing gear that could damage or destroy corals. 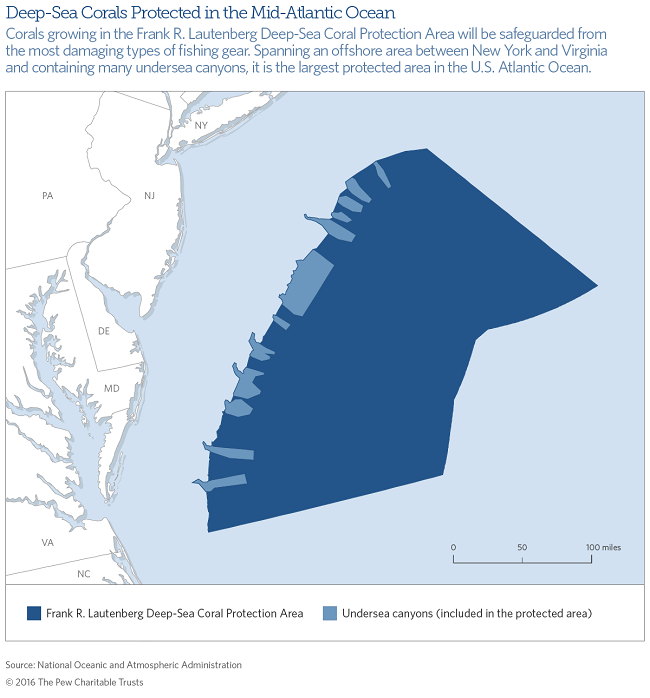 Ten years ago, when Congress last reauthorized the Magnuson-Stevens Fishery Conservation and Management Act, the nation’s primary fishing law, the late Senator Frank Lautenberg (D-NJ) championed a new section of the law to increase the study and protection of deep-water corals. The Mid-Atlantic Council is the first of the eight regional fisheries management bodies in the U.S. to protect coral under this provision. In doing so, the council has set a new high bar for ocean conservation.

Deep-sea corals tend to draw a crowd, since they provide important shelter for a number of marine species to hide, hunt, grow, and reproduce. These high-value habitats contribute to healthy food webs in the Atlantic Ocean, and scientists often spot rare and even new species during exploration missions. But while these corals can withstand harsh conditions in the cold, dark waters of the deep, they have no defenses against destructive bottom fishing gear. 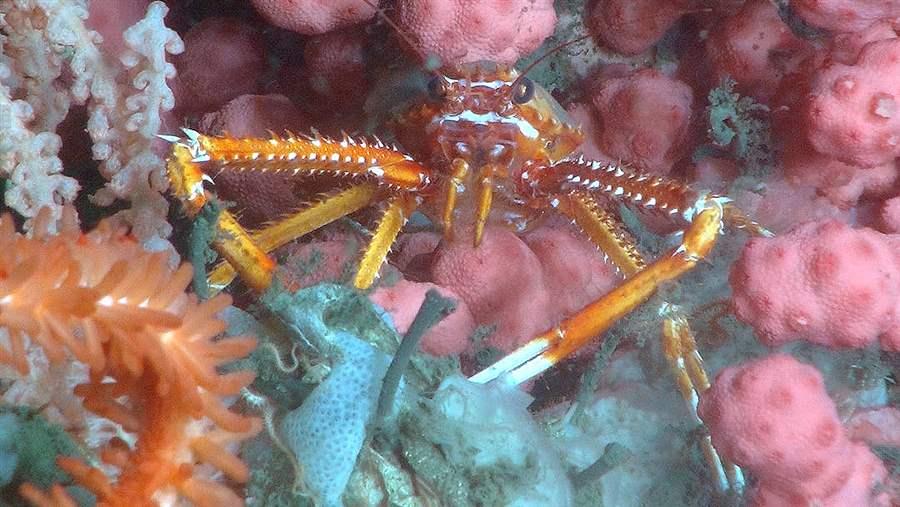 A squat lobster rests among a bubblegum coral, a red tree coral, a sponge, and a brisingid seastar in an underwater canyon off the mid-Atlantic states. Deep-sea corals provide important shelter for a number of marine species to hide, hunt, grow, and reproduce.

Until the past few decades, fishermen avoided habitats with boulders, outcrops, and canyons because of the risk of snagging, tearing, or losing expensive fishing gear. Innovations in gear—with names such as “rockhoppers” and “canyon busters”—led to heavily weighted rollers and chains that could crush and scrape the seafloor in pursuit of fish and resurface intact, even from rough habitat. In a matter of seconds, those heavy-duty gears often damage or destroy corals that have been growing for centuries and will take at least that long to recover.

The Mid-Atlantic Council began looking at how to protect these coldwater species years ago, asking scientists at the NOAA to identify areas where the corals might be found. To grow securely, deep-sea corals need to attach to a hard footing—often not easy to find in the soft sediment of the ocean’s continental shelf. But in the Atlantic, as the shelf slopes toward the deep ocean, the seafloor gives way to many steep, rocky underwater canyons. These dramatic features create unique ocean currents, churning waters that in turn clear the canyon walls of sediment. It is here among the nooks, crannies, ledges, and ridges that deep-sea corals thrive. 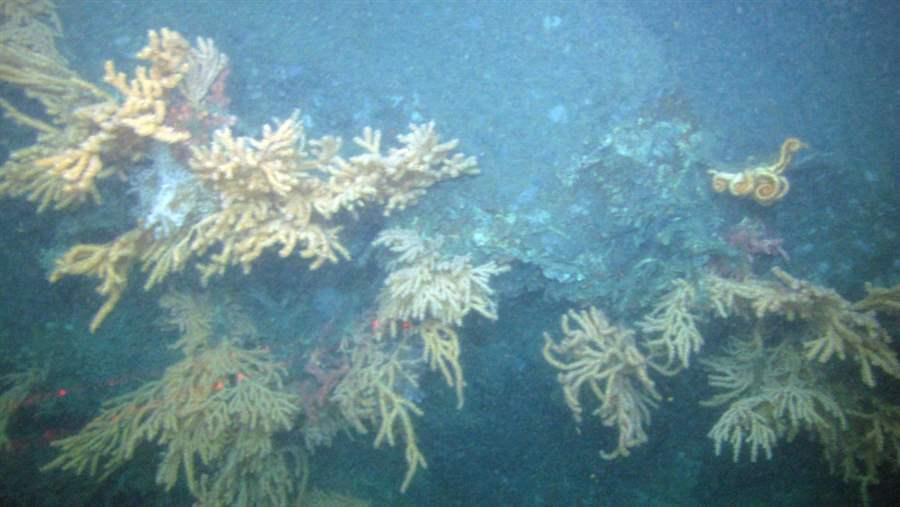 A 2012 NOAA expedition spotted these deep-sea corals holding fast to a nearly vertical wall in the dark waters of Norfolk Canyon, the southernmost of the canyons in the Frank R. Lautenberg Deep-Sea Coral Protection Area.

With science and video information gathered from 2012 and 2013 deep-sea expeditions in the underwater canyons off the mid-Atlantic states by the NOAA vessel Okeanos Explorer, the council began the thorough process to create protections, soliciting input from stakeholders and the public. In one 2015 workshop, fishing interests, conservation groups, and other stakeholders collaborated with the council to define the boundaries of the protected area. This cooperative approach led to an agreement. The council passed a motion protecting the area later that year and sent it to NOAA to be finalized. After conducting an additional review and public comment period, the agency announced regulations protecting the area in December 2016.

Deep-sea coral ecosystems have evolved over millions of years. By virtue of their inaccessible locations, they have remained untouched for nearly all of human history. But they now face real threats and thus require modern protections.

We hope that other fishery management councils will follow the Mid-Atlantic Council’s lead in demonstrating how scientific understanding can contribute to better management, and how different groups can come together around the shared goals of healthy ocean ecosystems and sustainable fisheries.

The U.S. continental shelf&rsquo;s edge in the Atlantic Ocean contains submerged cliffs and canyons that shelter hundreds of species, including magnificent deep-sea corals. These corals provide habitat for many fish and invertebrates and are among the oldest animals on Earth.