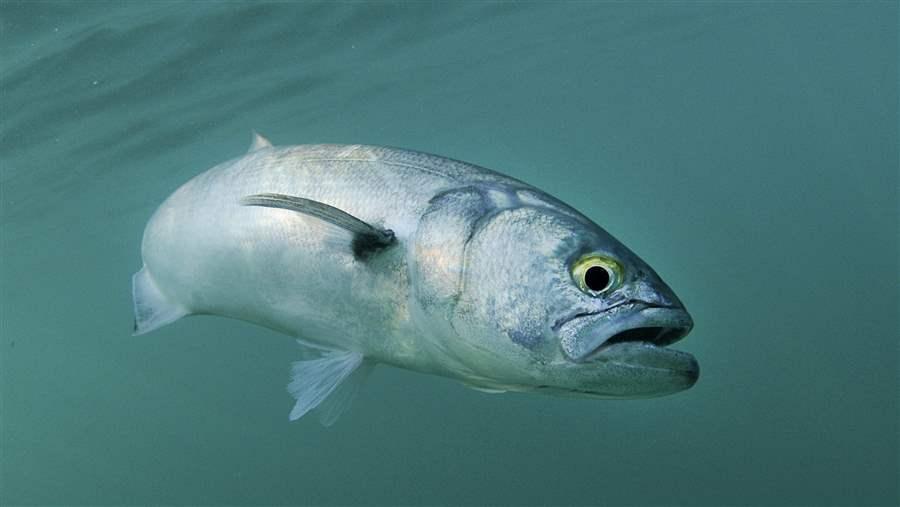 Higher winter temperatures may alter the seasonal migrations of species, such as this bluefish, that are distributed across a large area. After mild winters, more young bluefish may travel north, away from the southeastern U.S. coast, because they have more energy.

Scientists have discovered that winter temperatures affect the distribution and abundance of fish species along the South Atlantic coast of the United States. A new study funded by The Pew Charitable Trusts found greater abundance of southern, warm-water species in northern waters after mild winters.

The analysis shows that changing climatic conditions can significantly alter fisheries. Although studies have previously determined that the geographic ranges of fish species in the mid-Atlantic and New England are shifting poleward as waters warm, such changes had not previously been found along the South Atlantic coast, one of a few regions where surface temperatures have not exhibited any long-term patterns over the past century. This research found that even without a trend, winter temperatures are a key predictor for explaining year-to-year variation in marine species migrations and may provide insights for fisheries managers. It also shows that climate change may contribute to long-term species distribution shifts and that winter temperatures in particular may be an important indicator of how rapidly marine species respond to changes in temperatures on a global scale.

Using 26 years of trawl survey data, scientists Malin L. Pinsky and James W. Morley—both from the Department of Ecology, Evolution, and Natural Resources at Rutgers University—assessed 73 species found off the U.S. southeastern coast in a region called the South Atlantic Bight, which runs from Cape Hatteras, North Carolina, to Cape Canaveral, Florida. They also compared this information with commercial catch data for 23 of the studied species.

“Our results suggest that winter temperatures are a major factor determining the geographic distribution and abundance of fish species in the South Atlantic Bight,” said lead author Morley. “The severity of a species’ response was based on whether it was a cold-water or warm-water species and how strongly it is affected by changes in water temperature.”

For each species, researchers calculated annual winter temperature anomalies based on daily averages and then determined annual abundance and center of geographic range. By comparing these data, they were able to assess how each species responded to changes in temperature—either by migration to suitable temperatures or through changes in the number of individuals.

In the years after warmer-than-normal winters, species in the more southern areas of the region expanded north.

This study shows that changing temperatures could alter the structure of marine ecosystems. The National Oceanic and Atmospheric Administration projects a rise of 2 to 5 degrees Fahrenheit (1 to 3 degrees Celsius) in sea-surface temperatures in the U.S. South Atlantic by 2080. Given the sensitivity of southeastern fish species to yearly fluctuations, they are likely to be highly responsive to such future long-term increases. 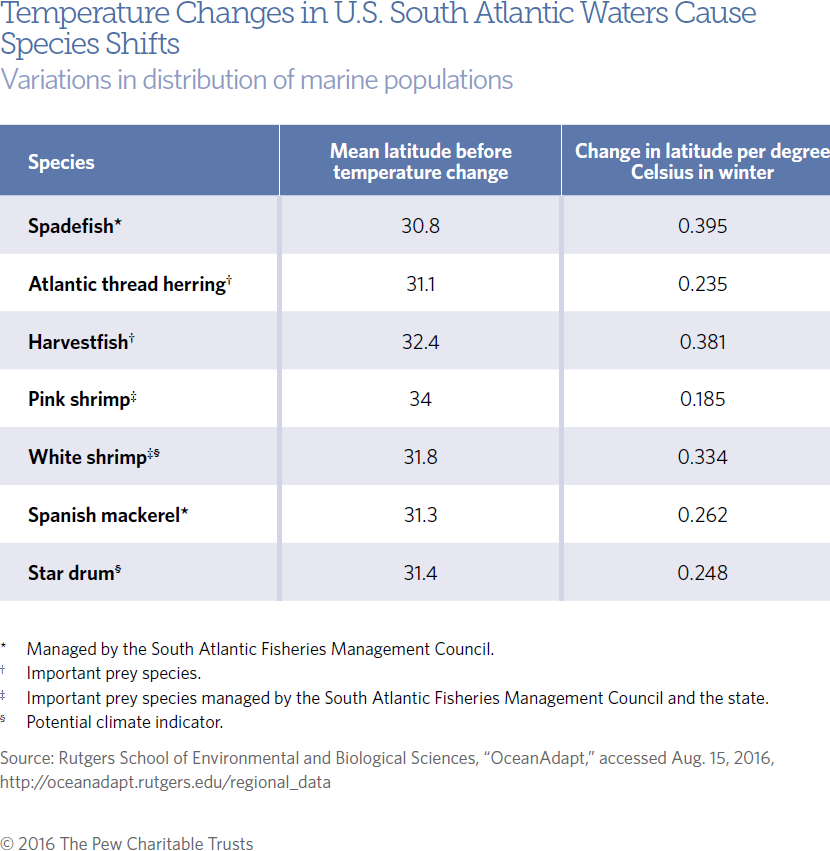 In this area, warmer winters will probably result in increased abundance of species that typically are found farther south, such as white and pink shrimp, spadefish, and Spanish mackerel. As a result, some northern species could be displaced as new species expand into their territory and compete for food and resources. Similarly, populations of invasive species from tropical waters may become more established in northern regions, potentially displacing and competing with cold-water species. Periodic cold winters have prevented warm-water species such as white shrimp and star drum, which are more common in the southernmost regions of the U.S., from becoming fully established in northern areas.

“Fisheries managers may want to consider the potential long-term impacts of climate change on fisheries in their management plans,” said Pinsky.

Managers could factor environmental conditions into their models or catch rules to account for climate variability even when there is no clear long-term temperature trend. Approaches such as ecosystem-based fisheries management (EBFM), in which fisheries are managed as interconnected systems, can help managers look at many factors simultaneously: climate change, multiple fisheries, predator-prey interactions, and global markets.

Such an approach might have helped management of cod, once critical to New England’s fishing economy and still key to the ecosystem. Stocks are at 3 to 4 percent of sustainable levels, according to an article by Andrew Pershing, chief scientific officer at the Gulf of Maine Research Institute. His paper showed that rapid warming of gulf waters—99.9 percent faster than the global ocean between 2004 and 2013—contributed to the cod population’s decline and failure to recover even after fisheries managers limited catches.