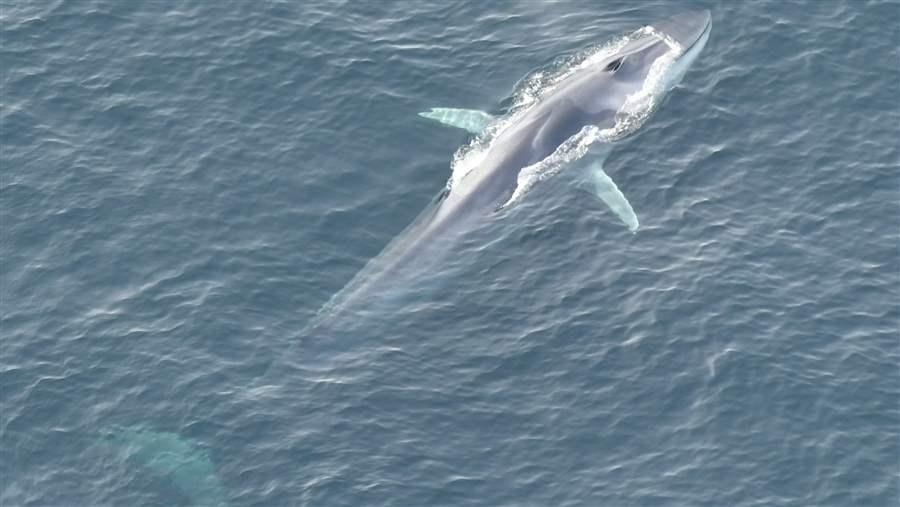 Fin whales, such as this one seen in November in the Northeast Canyons and Seamounts Marine National Monument, are endangered throughout their range. Threats to their survival include entanglement in commercial fishing gear, strikes from vessels, and lack of available prey because of overfishing.

The long shadow cast last week by the shrinking of Bears Ears and Grand Staircase-Escalante National Monuments is looming over the Atlantic Ocean. The day after President Donald Trump downsized Utah’s monuments, Interior Secretary Ryan Zinke released his final report on the remaining monuments under review, and to my disappointment, he recommended changes to the Northeast Canyons and Seamounts Marine National Monument, the only marine monument in U.S. Atlantic waters. Yet even as the administration considers rollbacks to protections, scientific evidence of the bountiful, diverse marine life in this ecosystem continues to grow.

New sightings at the surface 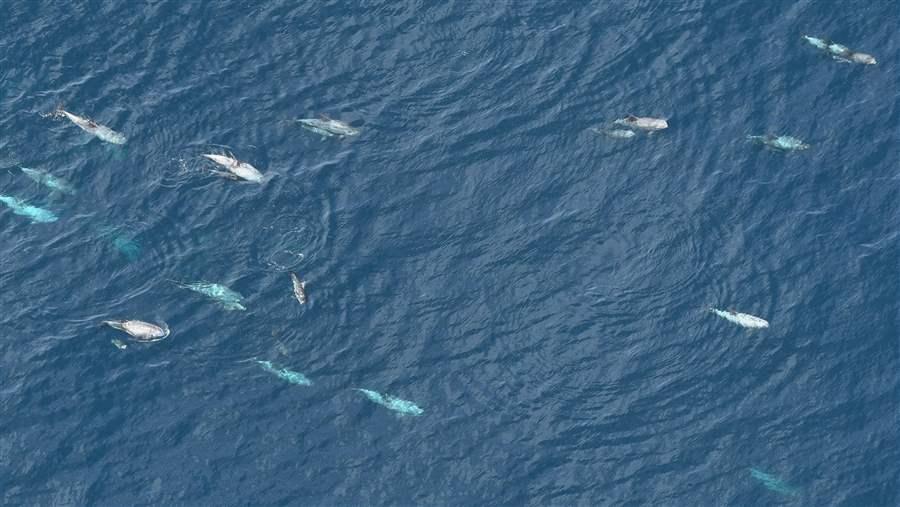 Scientists from the New England Aquarium observed 37 Risso’s dolphins, including juveniles, during an aerial survey in November. These dolphins, which can dive to at least 1,000 feet and hold their breath for 30 minutes, can become entangled in commercial fishing gear.

This collection of more than 100 top predators, many of them observed while feeding, suggests that a diverse range of prey species lurks below the surface, such as schooling fish and krill (the main diet of fin whales), and deep-water squid, fish, and crustaceans, which make up the bulk of beaked and sperm whales’ food. The presence of calves and juveniles indicates that the area may even serve as a nursery for marine mammals. Only a few years ago, Audubon Society scientists discovered that Atlantic puffins also spend their winters in these remote waters.

Deeper down, the coral-filled canyon walls, ledges, and seamounts provide habitat for many of the prey species that attract iconic marine wildlife. Scientists have documented almost 100 species of coral in this area and discover new ones on each visit. These fragile species are sensitive to damage from fishing gear, and like all creatures in the ocean’s cold, dark depths, they grow slowly. The damage caused in an instant can last decades or centuries, if recovery happens at all. 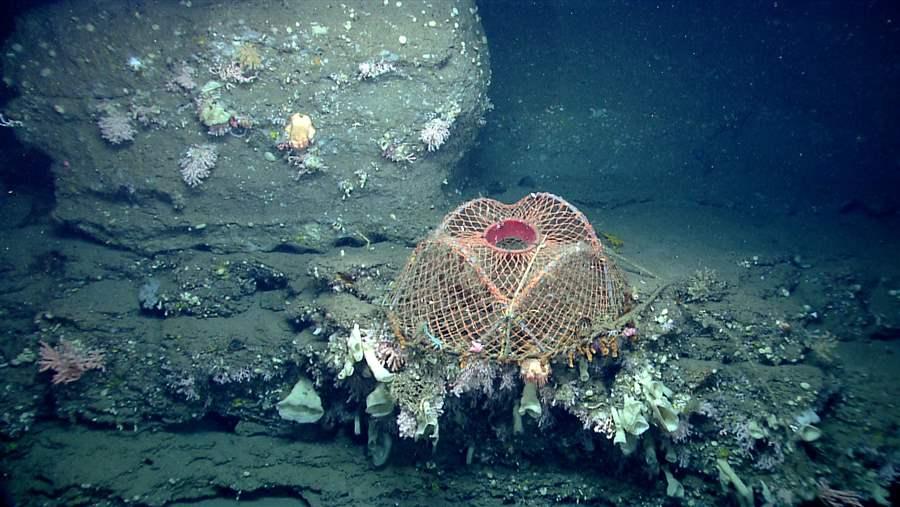 This red crab pot on a coral-covered ledge was photographed during a 2013 scientific expedition to the monument. Like many animals in the deep sea, such corals have extremely slow growth rates and can take decades or centuries to recover from damage.

Why commercial fishing should not be allowed

The vulnerable species in the monument waters need protection from contact with fishing gear, and suggesting that regulations on commercial fishing would be sufficient to eliminate harm to the animals here is wishful thinking. In fact, commercial fishing is simply incompatible with such a sensitive hot-spot. As a Boston Globe editorial noted last week, “allowing commercial fishing [in monument waters] … would do irrevocable damage” to habitats and species that are truly “irreplaceable.”

Recreational fishing is allowed in the monument, as it is in many of our national parks on land.

And federal policymakers took pains to accommodate local industry interests when they created the Northeast Canyons and Seamounts Marine National Monument. The few commercial boats actively fishing in the area, which an independent economic report found to be five lobstermen and three crabbers, were permitted to remain for seven years before they would have to move their operations outside the monument.

But now Secretary Zinke is proposing to grant the New England Fishery Management Council authority to make decisions about commercial fishing in the monument by applying the Magnuson-Stevens Act, the nation’s primary fisheries law. This would be a costly mistake that would distort the purpose of the monument. For as good as Magnuson-Stevens has been for rebuilding overfished stocks and helping to end overfishing in U.S. waters, its focus is on sustaining commercial yields rather than protecting unique or rare habitats and species. Safeguarding America’s special places in perpetuity from all threats is the domain of the Antiquities Act, the authority under which this monument was created.

What’s more, among the eight regional fishery management councils, New England has consistently had the worst track record on conservation, with the highest number of overfished species and the greatest amount of overfishing still occurring. As we have discussed before, the New England council has a three-decade-long history of risky decisions and failure to heed scientists’ warnings in one of the most productive ocean regions in the country, none of which should inspire confidence that the council will make choices in the best interest of this sensitive place.

Secretary Zinke’s report acknowledged that the public comments the department received “were overwhelmingly in favor of maintaining existing monuments.” This support for the current protections, expressed by Americans across the country, is consistent with polling done last year in Massachusetts and Rhode Island that showed strong bipartisan backing for safeguarding the Northeast Canyons and Seamounts Marine National Monument’s special ecosystem.

The president could attempt to remove protections from the monument at any time. We hope he will recognize that the winning move would be to leave well enough alone.

As you read this, the opportunity for Americans to voice their opinion on an extraordinarily biodiverse area of the Atlantic Ocean is closing. Aug. 15 is the final day to submit comments to the Department of Commerce on the Northeast Canyons and Seamounts Marine National Monument, which was established to safeguard an ecosystem teeming with sea life, including deep-sea corals that can take centuries to reach full size.