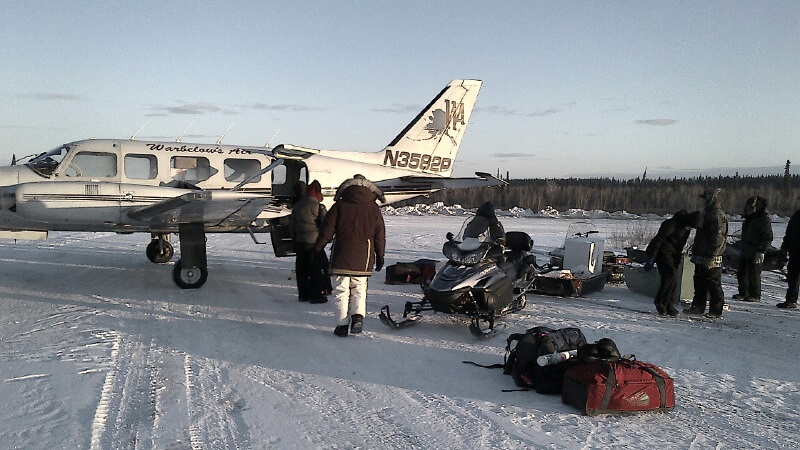 Visitors arrive in remote Chalkyitsik, Alaska, about 400 air miles northeast of Anchorage, on a bitterly cold day in 2013 for a BLM meeting on the stewardship of millions of acres of public land in the state’s Eastern Interior.

Alaska’s Eastern Interior encompasses 6.5 million acres of public land, much of it remote, pristine boreal forest and tundra. These rugged landscapes include White Mountains National Recreation Area and support dozens of vast river watersheds, such as the Fortymile and the Draanjik, that are vitally important to local tribal communities.

All of these areas are overseen by the Bureau of Land Management, which in 2012 released a draft Resource Management Plan for the Eastern Interior that would have allowed mining in the upper Daanjik River watershed, an area tribes had asked BLM to protect. For centuries the Gwich’in people have considered the watershed traditional land, using it for subsistence hunting and gathering.

After reading the BLM draft, tribes from the communities of Chalkyitsik and nearby Fort Yukon decided to mount an opposition.

The Pew Charitable Trusts has worked for years to support tribal efforts to safeguard traditional lands and wildlife habitat from destructive development, a commitment that includes attending public hearings in the Eastern Interior in the coldest months of the year. That’s because tribal subsistence activities like hunting, fishing, berry picking, and wood gathering dominate the Native peoples’ days during summer.

For advocates like me, attending these gatherings necessitated flights in tiny planes, sleeping on school floors because many remote communities have no commercial lodging, and sometimes pulling out my travel guitar to sing for my supper in the home of a local family. But being on the ground helped me to better understand the importance of this traditional land and way of life to the people of the Draanjik.

On one memorable trip in the spring of 2013, I arrived in Chalkyitsik for a potlatch—a traditional tribal feast—and a community meeting in preparation for a public hearing on the BLM’s draft plan for the region. As we stepped off the small plane and onto the tarmac—there are no airport buildings in Chalkyitsik—the ambient temperature was about minus 30 degrees Fahrenheit, with a wind chill of minus 50. I quickly realized I hadn’t brought the right gear, lacking, for one thing, a fur ruff on my hood to save my face from freezing.

We piled our bags and the box of fresh fruit we had brought for the feast onto a sled, which a snowmobile (called a snow machine in Alaska) then hauled to the small community on the banks of the upper Draanjik River. My two companions and I followed on foot, a short walk that felt endless in the bitter cold wind.

Arriving at the warm Chalkyitsik tribal offices, we were welcomed by the staff. The office restroom was broken, and the nearest working one was in the Washeteria, a couple of buildings away. In a remote community of only 75 people, summoning a plumber isn’t always easy.

At the public meeting tribal members gave critical input to BLM on the draft resource management plan, and the two sides agreed to government-to-government consultation to resolve their differences. But more work lay ahead. Last spring, after numerous discussions with BLM, tribal leaders left their tight-knit communities for four days and traveled the 4,000 miles to Washington to urge top BLM officials to protect the subsistence resources, watersheds, and habitats upon which an entire way-of-life depends on the Draanjik.

The tribes didn’t get everything they wanted, but on Jan. 3 BLM issued a final plan that prohibits mining in 70 percent of the Draanjik watershed but allows it in other, less-sensitive regions of the Eastern Interior.

In a world in which nature is diminishing and increasingly threatened by human activities, the Draanjik is that rare place where the water is still pure and there’s room to breathe. It looks today much like it did at the end of the last ice age some 12,000 years ago.

My heart was happy when Gwichyaa Zhee Gwich’in Chief Nancy James said: “Our people always migrated along the rivers because water sustains life … our life. The protection of the Draanjik watersheds in this plan will not only preserve our current way of life but also [help ensure] our survival into the future.”

I join my colleagues at Pew in applauding BLM for thoughtfully considering the tribes’ concerns in its final plan, which responsibly accommodates mineral development and provides watershed protections that will allow continued traditional and customary uses of land by Alaska’s Eastern Interior Native communities for generations to come.

After eight years of planning, the Bureau of Land Management (BLM) on July 29 released its Eastern Interior Proposed Resource Management Plan and Final Environmental Impact Statement. The document will guide the management of 6.5 million acres of some of Alaska's most remote and pristine public land over the next 20 years once it is finalized later this year in a Record of Decision. The proposed plan strikes an appropriate balance in the Eastern Interior planning area between development, the protection of critical traditional uses, and the conservation of important habitats for internationally important fish and wildlife species

Fairbanks residents by a two-thirds margin want the Bureau of Land Management (BLM) to make recreation and conservation a priority for the nation&rsquo;s public land, according to a new bipartisan poll commissioned by The Pew Charitable Trusts.

Gwich’in leaders advocate for their homeland in U.S. capital

A group of Alaska Natives recently traveled more than 4,000 miles from the state&rsquo;s remote reaches to the nation&rsquo;s capital to voice concerns about their homeland&rsquo;s future and lobby for its protection.

The Bureau of Land Management (BLM) today released its final four Records of Decision for management of public land in Alaska&rsquo;s Eastern Interior. These plans and a final Environmental Impact Statement will guide the agency&rsquo;s management of some of Alaska&rsquo;s most remote and pristine public land for the next two decades. Significantly, this marks the first time that the Eastern Interior&rsquo;s Draanjik area, managed by the BLM, has been included in a resource management planning process.