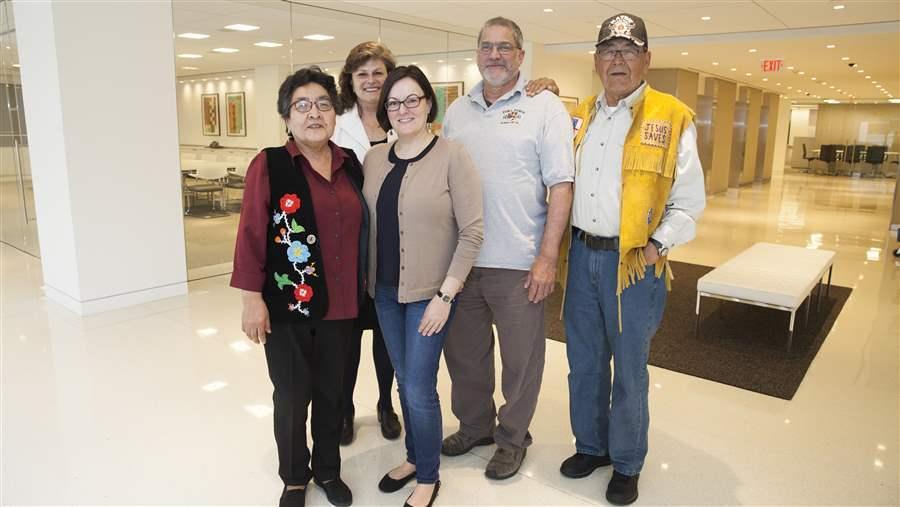 Alaska Natives gather at The Pew Charitable Trusts’ offices before meeting with federal officials to discuss protections for the state’s Eastern Interior region.

A group of Alaska Natives recently traveled more than 4,000 miles from the state’s remote reaches to the nation’s capital to voice concerns about their homeland’s future and lobby for its protection. The delegates—Nancy James, first chief of the Gwichyaa Zhee Gwich’in Tribal Government; Paul Williams Sr., traditional tribal chief in Beaver, Alaska; Gwich’in attorney Kristi Williams; and Draanjik ecological expert and subsistence hunter Joe Matesi—made the case to Obama administration officials that the pristine Draanjik, or Upper Black River Subunit, in Alaska’s Eastern Interior region should be protected from development.

At 2.4 million acres, the ruggedly remote Draanjik makes up about a third of Alaska’s Eastern Interior—a nearly 7 million-acre region, overseen by the Department of Interior’s Bureau of Land Management (BLM), that is undergoing a planning process to determine how this public land will be used over the next 20 years. BLM officials are expected to issue their proposed resource management plan in the coming weeks. The Pew Charitable Trusts hosted the indigenous Alaskan leaders in Washington and facilitated their meetings with administration officials.

While in the nation’s capital, the Alaska advocates met with members of Pew’s public lands team, sharing their reasons for the trip and hopes for a resource management plan that would prohibit development on lands their communities depend on—not only for food, but also for a sustainable way of life.

Q: Describe the Draanjik area of Alaska’s Eastern Interior that you’ve traveled so far to talk about.

Williams Sr.: The Draanjik River is a really unique and magnificent river and goes into the Porcupine River and connects to the Yukon or Gwichyaa River. It’s beautiful for me and anyone who appreciates being close to their family. From the family you learn to be close to the creator of the universe, who made heaven and earth and mountains and moose and caribou and the changes of the season. You can see how perfectly it works. The fish come back, the moose come back, the caribou come back. We have to give credit to the place where life begins. It is beautiful. It is a miracle when you look at it.

That is what I see—the beauty. It is worth preserving—and not to throw it to the dump, turn it into bad water. [If mining is allowed in this region] all the water will be poisoned, all the trees will be cut. The coat of many colors will be taken off by mining. That is why I like the Draanjik—because of its beauty. My father and mother lived there before me. They were healthy and intelligent—they were thick and strong. We knew who they were. Good people, strong. Brave in the war. That is where we come from. That is why we come here, to request in a humble way.

James: We are all descendants from there. We need to preserve it for our children and our children’s children. That is the last [traditional] land that is not occupied and preserved by our elders, and they have taught us to preserve it. With that land goes our culture, our tradition, and our language. It’s our way of life. It’s who we are, the Gwich’in people. It’s on the tip of our hearts.

Kristi is our first Gwich’in lawyer. We want to preserve and continue to teach and educate our children so they can enjoy the fishing and hunting that we so enjoy.

How long has your community used this land?

James: Ten thousand years or more. We were already there when Columbus came.

Most of us have never been to Alaska—can you tell us what makes it so special?

Matesi: The Draanjik is a part of the Yukon River watershed. It is the last river system in the world that is free-flowing and unaffected by humans. It is natural, untrammeled, and supports a traditional, indigenous culture that is the last of its kind in North America.

Explain your community’s relationship with the land.

Williams Sr.: I grew up in the Draanjik region. Women make men strong and give them culture. Behind every good man there is a strong woman. On the land, he appreciates what he’s got because of his family. He can fish and go out and is not afraid to live on the land. They call it the land of milk and honey. This goes really deep, our attachment to the land. If you learn the language, you have to learn the beliefs too—and the beliefs are magical. You can pick it out, and it will talk to you in your heart.

James: Land is survival. That is where we do subsistence and can recreate. In our traditions, there is no line or regulation. You can jump in a boat, sit by the campfire. That is what community is—to be able to enjoy and relate. And without people, the land doesn’t matter. So it really goes land to people, people to land. That’s who we are.

It does not take much effort to be critical, but it does take a lot of energy to make a difference. That’s community—to make it better. It’s wondering; it’s a privilege.

Williams: I don’t support further development in the Draanjik region. The jobs there [in mining, oil, and gas] are not safe. I’ve lost a brother; Nancy has lost a brother in Prudhoe Bay. We want jobs that are safe and sustainable. Our people and our culture are irreplaceable. Once it’s gone, it’s gone.

Matesi: The Gwich’in nation has nine subdivisions. And the Draanjik region is one of them; they are inseparable—the land and the people.

What do you hope the Obama administration will do regarding the Eastern Interior?

James: To protect our way of life. That’s why we’ve traveled a long way. To enjoy what we’ve been enjoying.

Williams Sr.: That is why it is important for us to be down here.

Why should this be important to people far from Alaska?

Matesi: The loss of protection for that land would mean the loss of yet one more indigenous culture, and that would be a terrible loss for all humanity.

James: Well, it all goes down to respect and what you like to enjoy. If you like to go, look, and enjoy surroundings where you can recreate—that’s important. How you manage and take care of our hunting grounds, that have also been shared with us from our ancestors. And that is exactly who we are. Anyone who would respect themselves would also respect other cultures, their land, and their people. Because that is life. It is the last of the true boundary of enjoying life. The last of the Mohicans. That’s how it is. The last of the Gwich’in.