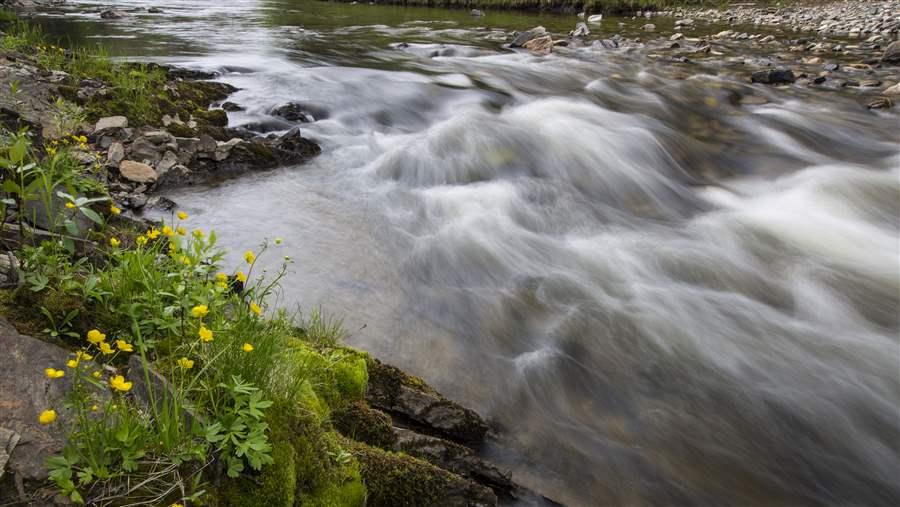 Flowing for 392 miles, the Fortymile River is the longest federally-managed wild and scenic river.

Update: The Bureau of Land Management issued the final plan on January 3, 2017.

After eight years of planning, the Bureau of Land Management (BLM) on July 29 released its Eastern Interior Proposed Resource Management Plan and Final Environmental Impact Statement. The document will guide the management of 6.5 million acres of some of Alaska's most remote and pristine public land over the next 20 years once it is finalized later this year in a Record of Decision. The proposed plan strikes an appropriate balance in the Eastern Interior planning area between development, the protection of critical traditional uses, and the conservation of important habitats for internationally important fish and wildlife species.

Alaska's wild and secluded Eastern Interior is a place of vast landscapes and complex river systems spanning some of America's most untrammeled land. This public land, located east of Fairbanks, is managed by the BLM and contains the traditional lands of 12 federally recognized tribal communities. The Eastern Interior planning area is divided into four subunits—the Steese, the White Mountains, the Upper Black River or Draanjik, and the Fortymile.

Moose, caribous, grizzly bears, wolverines, and eagles are among the many species making their home in the Eastern Interior, along with dozens of fish species that depend on the vast rivers for spawning and rearing habitat. The planning area's western portion also provides outstanding opportunities for a variety of recreational pursuits, including hunting, fishing, rafting, and cross-country skiing to winter huts.

This region has sustained human communities for thousands of years. Remote communities living in the planning area’s easternmost part depend on the health of watersheds that support large caribou herds, Dall sheep, moose, migratory birds, fish, and water resources. The plants, fish, and wildlife provide most of the food as well as essential cultural meaning for the Gwichyaa Zhee and Draanjik Gwich’in people of Alaska’s Eastern Interior.

The July 29, 2016, proposed final plan addresses public concerns resulting from the draft plan, released in 2012, by striking the right balance between responsible development, protection of important recreation areas, and traditional tribal uses of public land. The Steese National Conservation Area (NCA) and the White Mountains National Recreation Area (NRA) are protected from mining, and 4,000 acres of the White Mountains subunit, outside the NRA, is open to mining. Some 30,000 acres of the Steese subunit outside the NCA is open to mining, and the remainder of the Steese subunit—1,237,000 acres—is closed to mining. More than a million acres in the Fortymile Mining District is open to continued mineral development; the area has been mined since the early 1900s. Under the plan, protections for the Upper Black or Draanjik River watershed and the 623,000-acre Salmon Fork ACEC—which were tribally requested—will conserve this important source of drinking water and vital fish and wildlife habitat essential to the people of the region.

The proposed final plan achieves a fair balance between development, the protection of critical traditional uses, and the conservation of important habitats. In the Upper Black River region, we urge the BLM to provide broader protections for this intact landscape that are consistent with the original nomination submitted by the Draanjik Working Group.