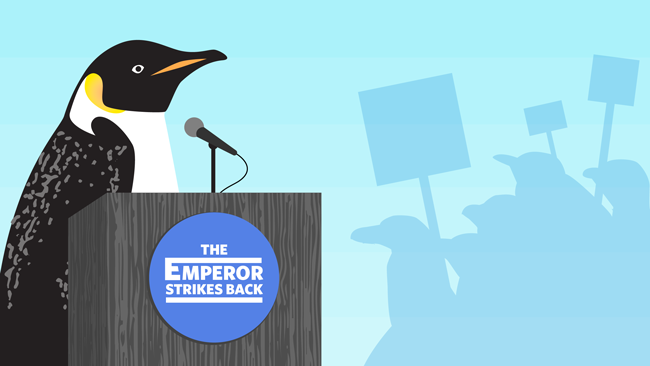 The movie “March of the Penguins” documented the emperor’s survival and endeared the species to the public. Will that exposure help the emperor win the favorite penguin contest?

The Pew Charitable Trusts’ 2016 Penguin Election is in full swing, with six species of these flightless birds each vying for your vote. All six live, feed, and breed in and around Antarctic and sub-Antarctic waters. This is valuable habitat that the Commission for the Conservation of Antarctic Marine Living Resources (CCAMLR), which is responsible for rules concerning fishing and sustaining wildlife in the Southern Ocean, must protect with science-based conservation measures.

To help draw attention to their home, these birds have agreed to participate in a contest to determine the world’s favorite Southern Ocean penguin species—with you as the decider!

Through Sept. 30, we’ll profile each candidate to help you make an informed choice (see our first candidate profile). Each of these hopefuls is running on a powerful platform, seeking both your vote and comprehensive protections to help the Southern Ocean continue to support thriving ecosystems.

Who is running, and what are their positions on the issues? We’ll be answering those questions and more as we profile each candidate. We’ll announce the winner Oct. 13.

Campaign slogan: The Emperor Strikes Back

Platform promise: “If elected, I will do everything I can to ensure that large-scale, fully protected marine reserves—especially in the Ross Sea—will be created. Why? To help ecosystems build resilience to climate change and safeguard the ability of all emperor penguins to nest, breed, and find food in peace. “

Signature trait: Male and female emperor penguins share chick-rearing duties equally. The male shields a pair’s single egg from frigid temperatures over the winter, up to two months, while the females leave the colony to feed.

Penguin profile: The emperor penguin is one of the most ice-dependent penguin species, requiring sea ice for foraging, breeding, and raising its young. The species became famous after the 2005 release of the Academy Award-winning documentary "March of the Penguins."

Despite its celebrity status, the emperor is in jeopardy. A study in Nature Climate Change predicted that the global population of these penguins will decline by 19 to 33 percent by the end of this century due mostly to climate change and associated shifts in sea ice, which are forecast to affect where the emperor can breed and how far it must travel to hunt.

This could result in lengthy—and unpredictable—absences for the parents, increasing the likelihood that their chicks will succumb to predation and starvation. This is a critical risk because the emperor has only one chick per year per pair.

Females travel up to 75 miles to reach open water for food—a process that can last up to two months—while males keep the newly laid eggs warm, eating nothing during the incubation period.

Emperors are the only penguins to breed on sea ice and incubate their eggs through the Antarctic winter, enduring brutal storms and wind chills as cold as minus 76 degrees Fahrenheit.

Why the emperor deserves your vote: Fossil records show that emperor penguins probably began evolving during the time of the dinosaurs. They have survived frigid, dark Antarctic winters and threats from fierce predators for millions of years. But climate change and industrial fishing are imperiling their historic run. According to researchers at the Woods Hole Oceanographic Institution, one particular colony could decline to between 500 and 600 breeding pairs by 2100, a sharp drop from its current population of about 3,000 pairs.

By winning the vote as humankind’s favorite penguin, the emperor would continue to remind the world of what is at stake in Antarctica, how human activity is harming this special environment, and why CCAMLR and the world must act now to protect the Southern Ocean.