The emperor penguin colony made famous in the Academy Award-winning documentary “March of the Penguins”is in jeopardy. This year's World Wildlife Day, March 3, is an opportunity to encourage action by the United States and other nations to protect these flightless birds and their icy habitats.

In Antarctica, emperor penguins depend on sea ice as they forage for food and raise their young. Females trek up to 75 miles from their breeding colonies to the ice's edge to find nourishment for themselves and their chicks. Foraging for krill, Antarctic silverfish, and squid can last for several weeks. During this time, they rely on sea ice as a resting place between deep dives and as a refuge from predators such as leopard seals. However, warming seas as well as melting and shifting ice jeopardize these areas and the penguins' ability to find sufficient food. 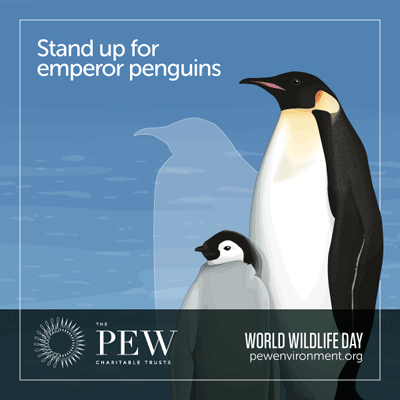 For example, emperor penguins of Terre Adélie in East Antarctica are the most ice-dependent of all such species and face significant population threats. According to researchers at the Woods Hole Oceanographic Institute, if ice coverage shrinks further, the colony will decline to between 500 and 600 breeding pairs by 2100, a sharp drop from its current population of about 3,000 pairs.

The threats to this colony have ultimately led the U.S. Fish and Wildlife Service to examine protection of emperor penguins under the Endangered Species Act. Designed to stabilize at-risk animal populations and prevent their extinction, the law ensures that U.S. federal agencies act in a way that does no harm to endangered species. In the case of emperor penguins, this may include that special care be taken in approving fishing permits in their Antarctic habitat to mitigate the effects of melting and shifting ice, among other issues.

“Listing emperor penguins under the Endangered Species Act would be an acknowledgment of the threats they face from warming seas and industrial fishing,” said Andrea Kavanagh, director of The Pew Charitable Trusts' Global Penguin Conservation work. “It is a critical step toward greater protections for vulnerable Antarctic life.”

Although an endangered species listing for emperor penguins would be a significant  conservation move, more can be done to help them. Large-scale, fully protected networks of marine reserves help improve species' resilience to climate change by maintaining the structure of their food webs and protecting biodiversity. The creation of marine reserves in Antarctica's Southern Ocean would offer long long-term protections for penguins and the entire food web.

Last year, the Commission for the Conservation of Antarctic Marine Living Resources, consisting of 24 nations and the European Union, could not reach consensus on protections for more than 3.2 million square kilometers (1.2 million square miles) of the Southern Ocean. At its meeting in October 2014, the commission will have another chance to usher in a new era of marine protection.

“If countries work together, this year could see permanent protection for Antarctica's emperor penguins and the myriad species that depend on a pristine Southern Ocean,” said Kavanagh. “International cooperation on marine reserves will create a lasting conservation legacy.”