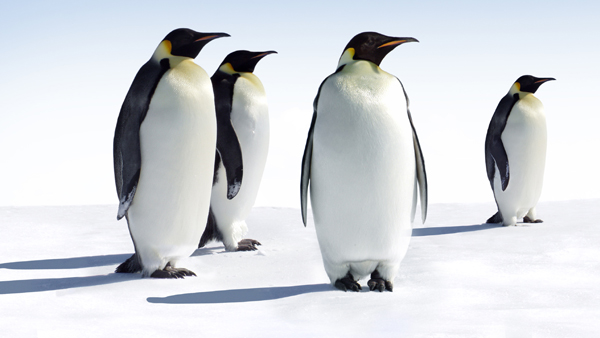 By the end of this century, the global population of emperor penguins will decline 19 to 33 percent from current levels, according to a new study in the journal Nature Climate Change.

The report, whose principal author was Stéphanie Jenouvrier of the Woods Hole Oceanographic Institution, analyzes emperor penguin populations in Antarctica and the impact that changes in sea ice will have on their breeding and feeding.  Using projections from climate models prepared for the United Nations’ Intergovernmental Panel on Climate Change, the study projects that the emperor penguin population will decline substantially by the end of this century.

“I believe emperor penguins fully deserve protections, including through the U.S. Endangered Species Act, because they face possible extinction throughout a significant portion of their range in the foreseeable future,” Jenouvrier said.

She said that emperor colonies in Antarctica’s Ross Sea may experience population declines later than others because sea ice conditions are still suitable for them. “Implementing a marine protected area in the Ross Sea could help buy time to avoid extinction and to put in place needed conservation and greenhouse gas mitigation strategies.”

To feed their young, emperor penguins leave the colony for months at a time and travel long distances across Antarctic ice to reach open water to find nourishment, such as krill.  These penguins are dependent upon an optimal amount of sea ice cover for a variety of reasons, including refuge from predators while foraging.  Changes to the sea ice cover can also significantly affect the abundance of krill, the emperor’s primary food source and a critical species in the Antarctic food web.  As the abundance of the food source declines, the parents are away from their young searching for food for longer periods, making it more likely that chicks will succumb to predation or starvation.

The study shows that by 2100, at least 75 percent of emperor penguin colonies will be vulnerable to the effects of changes in sea ice cover, and 20 percent will be quasi-extinct. The anticipated decline would leave the population at a level that would be considered threatened under the U.S. Endangered Species Act. Such a listing would ensure that U.S. federal agencies act in a way that does no harm to the species and may include special care taken in approving fishing permits to mitigate the impact of melting and shifting ice.

“The projected decline of penguin habitat and populations is very disturbing,” said Andrea Kavanagh, director of global penguin conservation for The Pew Charitable Trusts. “For penguins to have a chance of survival, the international community needs to come together to protect the ocean and the fish that these iconic birds depend on.

The creation of large-scale, fully protected marine reserves would help alleviate pressure on penguin habitats and food, by limiting the distance that emperors must travel to seek food. Although they cannot stop climate change, marine reserves can help keep ecosystems resilient and food webs intact by placing large areas of ocean off limits to fishing. They would provide penguins such as the emperor with a long-term chance to adapt to changing conditions.

In October, the Commission for the Conservation of Antarctic Marine Living Resources will consider proposals for creation of Southern Ocean marine reserves in the Ross Sea and the waters off East Antarctica. This will be the fourth time that the consensus-based organization takes up the measures.

“This news about penguins is cause for great concern and is all the more reason for CCAMLR to act,” said Kavanagh. “It is time to take proactive steps to ensure that emperor penguins will be a permanent part of the Antarctic landscape.”