The 16th meeting of the Conference of the Parties (CoP) will be held from March 3–14, 2013, in Bangkok, Thailand. CITES is widely recognized as one of the most effective and best-enforced international conservation agreements. It offers protection to more than 30,000 species around the globe and has been instrumental in preventing the extinction of numerous plants and animals.

The international trade of wild animals and plants, including fish and other marine life, is a multibillion-dollar business.

Overexploitation for international trade, in combination with habitat loss, habitat degradation, climate change, and other pressures, can threaten populations with significant depletion or, worst-case, extinction.

It is crucial that any international trade in plants, animals, and their products be managed in a sustainable and legal way. The Convention was constructed for this purpose.

CITES, an international treaty among 177 governments, entered into force in 1975.

CITES Meetings: Conference of the Parties

The 177 countries that are members of CITES are also known as “Parties.” They join voluntarily and are legally bound to implement the convention once they have become a member.

What Parties agree to do under CITES is not a substitute for their domestic laws and enforcement, or efforts under other treaties and agreements, including regional fisheries management organizations; rather, they are complementary. 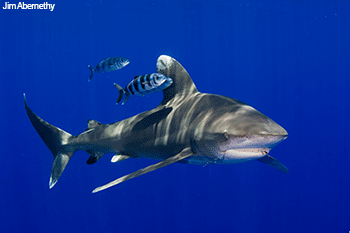 CITES meets every two to three years at the Conference of the Parties (CoP) to:

Each CITES Party sends a delegation to the CoP to discuss issues and vote on proposals and resolutions guiding the implementation of the treaty. Each Party has one vote, and a two-thirds majority of those voting is needed for a proposal to be adopted. Certain groups can attend the meeting to observe and participate in discussions, working groups, and committees but they do not have a vote. These, include:

So How Does CITES Work?

CITES Appendices: There are three CITES Appendices that provide varying degrees of protection for the species listed in the convention; enforcement is usually by national customs officials or police, and all Parties are required by the treaty to adopt legislation implementing CITES.

Appendix I: Species included in Appendix I are threatened with extinction, and international commercial trade in these species or their parts is prohibited. Trade for noncommercial purposes is allowed only in exceptional cases. For example, all seven species of marine turtles are listed on Appendix I in order to help reduce the severe impact that trade has had on their populations. About 600 animal species and 300 plant species are in Appendix I.

Appendix II: Species included on Appendix II are not yet threatened with extinction but could go in that direction if populations decline further and trade continues at an unsustainable rate. Appendix II still allows international trade, but it is regulated, which can give depleted species a chance to recover by ensuring through a rigorous permitting system that only sustainable and legal trade is allowed.

For example, only three sharks have global protections through CITES: great white, basking, and whale sharks. Countries agreed that these species would be listed on Appendix II because these shark populations were in decline. About 4,500 animal species and almost 30,000 plant species are included in CITES Appendix II.

Appendix III: This appendix includes species, listed by individual countries that regulate trade in them and need the assistance of the global community to prevent unsustainable or illegal exploitation, but do not involve determinations of sustainability. It requires that all countries exporting a species on Appendix III ensure that the species was obtained legally. About 270 animal species and 30 plant species are listed on Appendix III, including the walrus (listed by Canada) and red and pink corals (China).

The Pew Environment Group is advocating for the adoption of three shark proposals and one manta ray proposal, to include these species on Appendix II at CoP 16 (porbeagle, oceanic whitetip, and hammerhead sharks (scalloped, great, and smooth), and manta rays).

Fishing has drastically depleted shark and ray populations over the past 60 years. Of the shark and ray species assessed by scientists for the International Union for Conservation of Nature (IUCN), 30 per cent are threatened or near-threatened with extinction. Up to 73 million sharks are killed every year to support the international shark fin trade, with most of the fins ending up in shark fin soup.

Sharks and rays are slow to mature and have few offspring, making them extremely vulnerable to overfishing. Their life cycles are more similar to some mammals, such as lions and elephants, than to most fish, and it can take many years for populations to rebound once they are depleted. Overfishing by highly efficient modern fleets, illegal fishing, and bycatch (being caught in fishing gear but not as a legal/target species) is causing a drastic decline in shark populations wherever they are found, with international protection measures still patchy and piecemeal.

The successful conservation and management of sharks requires a wide range of measures, because sharks are highly migratory species that are caught both within national jurisdictions and on the high seas, and then traded in the international market. 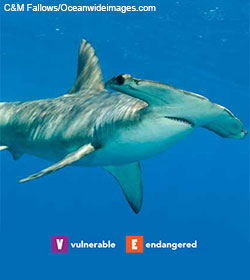 These sharks are found along the coastlines in warm, temperate waters of the Atlantic, Pacific, and Indian oceans. A proposal to include the species in Appendix II has been submitted by Brazil, Colombia, Costa Rica, Ecuador, the 27 member States of the European Union, Honduras, and Mexico along with the smooth and great hammerhead species because their fins look similar when traded. 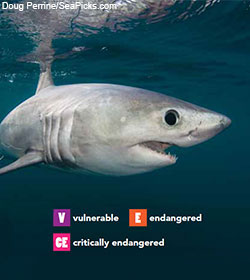 A coastal shark (and smaller cousin of the great white shark) that ranges into international waters. It is found in cold-temperate waters worldwide. A proposal to include the species in Appendix II has been submitted by Brazil, Comoros, Croatia, Egypt and the 27 member States of the European Union.

Learn more about the porbeagle shark. 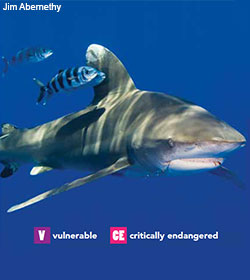 The oceanic whitetip is an open-ocean species with a distinctive white tip on its dorsal fin. A proposal to include the species in Appendix II has been submitted by Brazil, Colombia, and the United States. 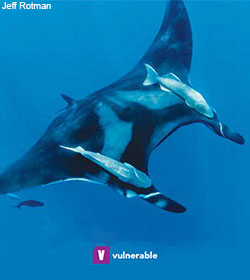 The oceanic manta ray (Manta birostris) is found around the world in tropical and subtropical waters; the reef manta (M. alfredi) is found in tropical and temperate waters. A proposal to include the genus in Appendix II has been submitted by Brazil, Colombia, and Ecuador.

Learn more about the manta ray.