An advisory panel of independent experts for the Food and Agriculture Organization (FAO) of the United Nations has publically endorsed proposals to regulate international trade of oceanic whitetip, 3 species of hammerhead, and porbeagle sharks under the Convention on International Trade in Endangered Species of Wild Fauna and Flora (CITES).

The advisory panel, composed of international fisheries experts and scientists, met in December in Rome to review proposals submitted by governments to list three commercially exploited shark species and manta rays on Appendix II of the convention at the next CITES meeting. 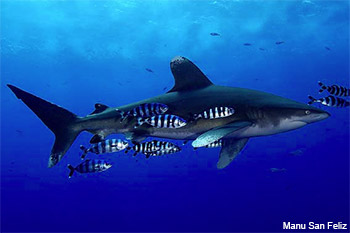 “We're encouraged to see fisheries experts and scientists from around the world agreeing that oceanic whitetip, hammerhead, and porbeagle sharks should be protected by CITES,” said Elizabeth Wilson, manager of global shark conservation at the Pew Environment Group. “CITES listings would help ensure that international trade does not drive these threatened species to the brink of extinction.”

The panel unanimously agreed that oceanic whitetip and hammerhead sharks meet the criteria for CITES listing. For porbeagle, the majority of the panel members also believed the species met the criteria for listing on Appendix II.

While the panel was unable to come to a decision regarding the manta ray species, they did acknowledge various risk factors including their low productivity, the seasonal and predictable aggregations, the lack of reliable catch and population information, and lacking management at the regional and international levels in many areas. Wilson noted that this is a disappointment as available information shows a rapid decline in manta ray populations and a CITES listing would help to ensure a sustainable future for these species.

A final decision on the proposals will be made by governments at the CITES meeting scheduled for March 3-14, 2013, in Bangkok, Thailand.

Learn more about CITES, including a list of countries that proposed protections for sharks and manta rays.