The population growth of any species depends on such lifehistory characteristics as the age at which the species can begin reproducing, how long it will live, and how many offspring it will have. These factors are also useful in predicting how quickly a population can recover from human activities such as fishing. With many of the world's shark populations declining, it is important to examine shark life-history characteristics and their management implications.

Comparing Sharks, Other Fish, and Mammals

In most cases, bony fish—even those that reach large sizes—develop relatively quickly, reach sexual maturity at an early age, can reproduce often, and produce many offspring. For example, swordfish mature by age 5 and can spawn multiple times a year, and females produce millions of eggs. In comparison, sharks grow slowly, mature later in life, reproduce as infrequently as once every three years, and produce few offspring.

The life histories of many sharks are more similar to those of large mammals than other fish. For example, dusky sharks, sperm whales, and brown bears each have gestation periods – the period from conception to birth – of more than a year. They also have few offspring, give birth to live young, and reproduce only once every few years. Female dusky sharks in the Atlantic Ocean do not mature until age 21, while female sperm whales and brown bears mature at about nine years.

In each of these instances, the animal's life-history characteristics impact the entire population's ability to grow. For example, a female shark that produced 10 pups every two years for 20 years would add only about 100 individuals to the population. In contrast, a female swordfish could theoretically contribute millions of offspring, and it is possible that thousands of these could survive if natural mortality from predators, disease, or starvation was low. 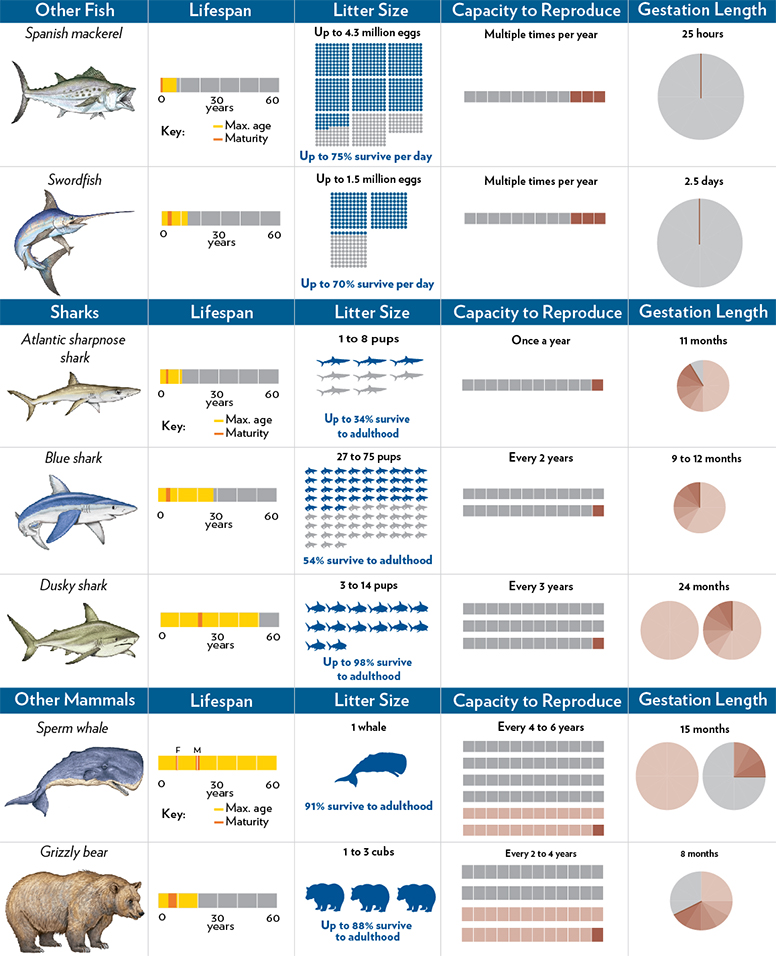