Note: This report was updated on Sept. 3, 2015, to correct a misstatement on Page 23 that the REAL ID Act of 2005 requires facial recognition technology. The act requires facial image capture. In addition, clarifications were made to endnotes 82 and 89.

U.S. citizens and lawful immigrants can routinely obtain and renew driver’s licenses, but some states have decided to allow unauthorized immigrants—those who do not have explicit permission from the U.S. government to reside in the country—to do so as well. As of the summer of 2015, 10 states (California, Colorado, Connecticut, Illinois, Maryland, Nevada, New Mexico, Utah, Vermont, and Washington) and the District of Columbia issue driver’s licenses, or similar documents referred to by different names, to this population, and nearly 37 percent of unauthorized immigrants live in a jurisdiction where they may obtain a license.[1]

Regulation of driver’s licenses is a state-level function, and state legislative activity around this question has increased in recent years. In 2013 alone, eight states and the District of Columbia passed laws making unauthorized immigrants eligible for driver’s licenses (one was later repealed). In 2015, Delaware and Hawaii enacted similar laws. As of this report’s publication, neither state had begun issuing licenses.

Debates over whether and how to license unauthorized immigrants are ongoing in many statehouses. In the coming years, more states are likely to consider whether to allow them access to driver’s licenses, while some that have such laws may contemplate changing or repealing them.

States consider legislation regarding these immigrants’ access to driver’s licenses in the context of the federal REAL ID Act, the 2005 law that created national standards for state driver’s licenses that can be used for federal identification. This law expressly authorizes states to provide licenses to unauthorized immigrants, but only if the licenses are distinct from regular ones in specific ways. State decisions also are likely to be affected by the federal executive actions announced in November 2014 that, if fully implemented, could allow millions of unauthorized immigrants who meet certain conditions to acquire the documents needed to apply for regular driver’s licenses under existing state laws.

This report highlights the decisions and experiences of policymakers and issuing agencies in 11 jurisdictions that issue driver’s licenses to unauthorized immigrants. Looking at their collective experiences shows the variety of approaches that states have taken and the issues they have confronted. These insights provide state legislators and other state policymakers with information to consider as they weigh their own choices. 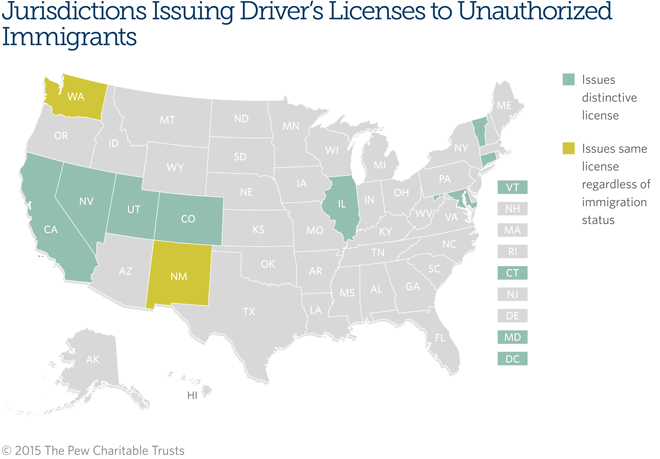 Legislative debates about issuing driver’s licenses to unauthorized immigrants have focused on topics ranging from the impact on public safety to insurance and accident rates. The Pew Charitable Trusts takes no position on federal, state, or local laws or policies related to immigration or driver’s licenses. As such, this report provides an overview of current laws and practices in jurisdictions that have opted to allow unauthorized immigrants to receive driver’s licenses. We do not examine the merits of these laws but instead focus on the choices that state legislators and administrators have made in preparing for and implementing them. This report does not address the issuance of learner's permits.

In examining state experiences, Pew identified four critical areas for policymakers to consider as they decide whether and how to issue driver’s licenses to unauthorized immigrants: scope, eligibility standards, issuance procedures, and outreach and education.

Scope. States estimate how many people could be eligible, how many will apply, and how often they would need to renew their licenses. These estimates help plan for initial startup costs, staffing and technological upgrades, and the expected costs of ongoing administration. They also help project the revenue the issuing agency can expect to collect from new customers. Pew found that states varied in how they estimated demand. That meant big differences in anticipated and realized costs and revenue and in the projected need for state resources and staffing. Each state projected that fees would pay for the costs of providing licenses, and most expect that revenue eventually would exceed costs. Still, it is too soon to determine whether startup funding and staffing levels have been sufficient, or whether costs and revenue have been appropriately balanced.

Eligibility standards. States determine the requirements for obtaining a license and how unauthorized immigrant applicants will meet them. This includes defining who is eligible to receive one and specifying the documents that can be accepted to prove eligibility. Pew found that states employ different strategies to accommodate people who do not have U.S. government-issued identity documents. Seven states and the District of Columbia require applicants to translate foreign-issued identity and residency documents into English. Four offer special procedures so that those who do not have the required documents can be considered on a case-by-case basis.

Issuance procedures. States define the processes to apply for, obtain, and renew the alternative licenses. They consider the best ways to identify and manage potential fraud by applicants who may have previously used falsified documents. States also make decisions about the circumstances under which applicant information will be shared with other public or private entities. Pew found that some states created entirely new appointment systems to manage the demand from new applicants. Six states and the District of Columbia require that unauthorized immigrants make appointments to apply for licenses, while an additional two states recommend appointments. Nine jurisdictions allow unauthorized immigrants to apply at any issuing agency location, while two limit where they may apply.

Outreach and education. States create outreach materials to educate those eligible about the requirements and the application process. They often look for ways to educate relevant communities about the agencies’ information-sharing policies to build trust among the target population. Pew found that states used a variety of approaches to reach immigrant communities and provide information about the new laws.

Exploring how the various jurisdictions handle each of these four areas, Pew developed a series of key takeaways: 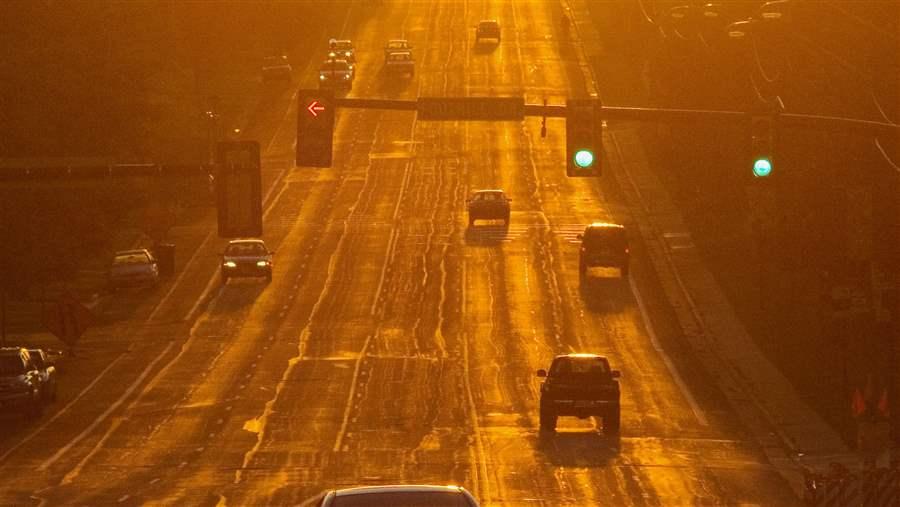 Approximate share of the unauthorized population that lives in a state where they can get a driver's license.

An update on states’ latest policies and implementation efforts

In August 2015, The Pew Charitable Trusts produced a first-of-its-kind report examining the experiences of states and localities that issue alternative driver&rsquo;s licenses to unauthorized immigrants. The analysis explored the choices these jurisdictions made on scope, eligibility standards, issuance procedures, and outreach and education as they designed and implemented their laws.

Immigration is again front and center in the domestic political debate. Congress may or may not pass legislation to reform the nation&rsquo;s immigration system, but in the meantime President Barack Obama has taken executive action to make as many as 5 million unauthorized immigrants eligible to avoid deportation.

This brief examines current population trends among the foreign- and native-born at the county level, and highlights the role that immigrants play in contributing to population growth and slowing population loss.

This report will help states and localities prepare for their potential roles in implementing any future federal legalization program for unauthorized immigrants. It reviews previous and ongoing immigration initiatives and identifies four key roles played by state and local governments: outreach, documentation, education and protection of immigrants from fraudulent services. The research also highlights how the growth and geographic dispersion of the unauthorized immigrant population in the United States&mdash;which historically has been concentrated in six states and is now spread across the country&mdash;means that all states may play a role in implementing a new legalization program.