This report will help states and localities prepare for their potential roles in implementing any future federal legalization program for unauthorized immigrants. It reviews previous and ongoing immigration initiatives and identifies four key roles played by state and local governments: outreach, documentation, education and protection of immigrants from fraudulent services. The research also highlights how the growth and geographic dispersion of the unauthorized immigrant population in the United States—which historically has been concentrated in six states and is now spread across the country— means that all states may play a role in implementing a new legalization program.

Only the federal government can give lawful status to immigrants who are not United States citizens, but states and localities may play an important part in implementing legalization programs and integrating newly legalized immigrants into their communities. Past and current experiences provide valuable insight into the potential roles and responsibilities of states and localities if the U.S. government were to enact a new large-scale legalization program.

Since the last major legalization in the 1980s, the number of immigrants —including unauthorized immigrants—in the United States has greatly increased, and they are much more widely dispersed across the country. 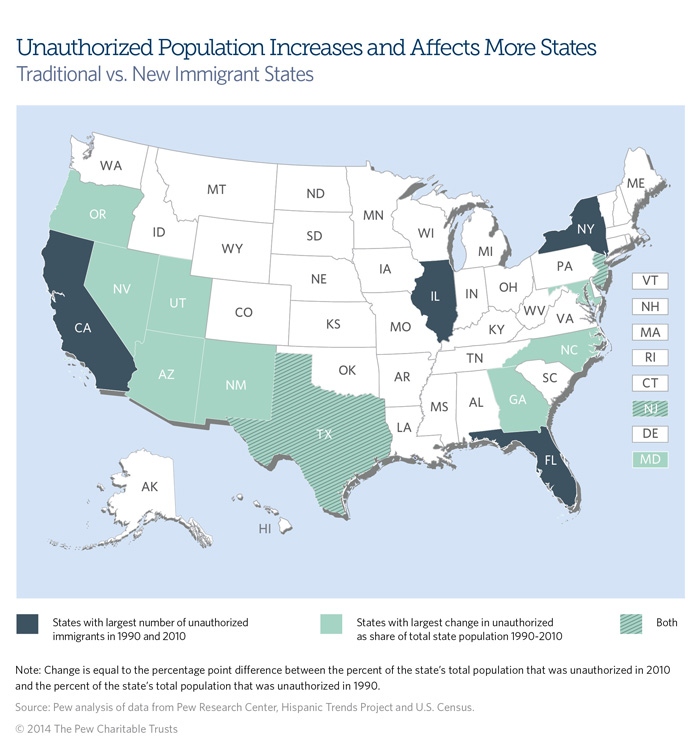 If a broad new legalization program were enacted, the six states that have historically received the most immigrants would certainly be the most affected, but other states, less traditionally associated with large immigrant populations, also are likely to have significant numbers of immigrants eligible for the new status. This means that many states likely to be affected by a new legalization program do not have much experience implementing such programs.

Roles and responsibilities of states and localities

The magnitude of a new legalization program could be significantly different from past programs, given the number of unauthorized immigrants in the United States today and their locations across all 50 states and the District of Columbia. Still, we can learn about the potential roles of states and localities in implementing such a program by examining previous efforts.

The Immigration Reform and Control Act of 1986 and the more recent Deferred Action for Childhood Arrivals program differ in scale, goals, and reach. One was a law that led to the legalization of several million unauthorized immigrants in the late 1980s, while the other is an ongoing administrative directive that has provided temporary relief from deportation to more than 500,000 qualified young people brought to this country by their parents as children.

However, the experiences with both show that states and localities have been required, or have chosen, to take on various roles and responsibilities during implementation. Among the most critical:

Other roles that state and local governments have had and could assume in the future include coordinating among various government agencies and nongovernmental organizations, monitoring implementation, and assessing the future needs of a newly legalized population.

Pew has no position on whether Congress should pass legislation on immigration, but believes that state and local governments can be prepared to implement a possible federal initiative. It is also critical that the role of states and localities be taken under consideration as Congress considers immigration legislation.