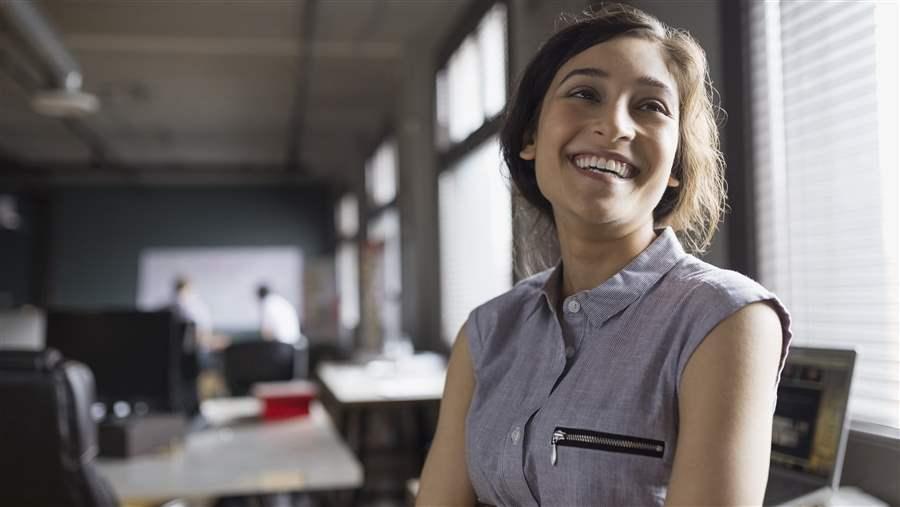 Workplace savings plans have long been key elements of funding post-retirement life, along with Social Security and other personal savings. But more than a quarter of American workers whose employers sponsor a retirement plan do not participate. These workers cite a variety of reasons, including concerns about affordability or eligibility. That means many employees may not have the resources they need once they reach retirement age, a reality that raises broader societal concerns about income insecurity over the long term.

Employers and government policymakers are examining ways to increase participation in savings plans such as individual retirement accounts (IRAs) or 401(k)s through built-in mechanisms, including automatic enrollment of new workers and automatic increases in employee contribution rates up to a certain percentage. In both cases, workers could choose to opt out.

This brief—based on an online survey conducted in 2016 of 1,991 workers with access to employer-sponsored plans at small and midsize businesses with five to 500 employees—examines how these workers perceive approaches in their employers’ plans intended to boost savings, known as pro-savings features.

Discussions at a series of focus groups help further elucidate worker attitudes. These groups addressed perceptions of state-sponsored IRA programs with automatic enrollment, known as auto-IRAs. Participant comments highlight how some see the pro-savings features as an overreach, impinging on their ability to manage their own savings.

What would encourage greater plan participation?

Workers who did not contribute to available plans cited a variety of reasons.1 In focus groups, some cited economic concerns: They could not afford to save or they worried about low returns on their investments or difficulty accessing these funds. Others said they were ineligible because of plan requirements, such as a minimum number of hours worked.

“Early in my career I was in IRAs, and I put in as much money as I could. Ultimately, I didn’t see the benefit of it. I really needed access to capital for something, and it was difficult to get to. And there were big penalties to get the money out. I didn’t see the performance from the stock market. And so at this point, at 57 years old, I can probably do better without putting it into a fund. Although if I was getting 11 percent, I might reconsider.”

—Participant from a small/medium-size business in Atlanta

“I’ve done all kinds of 401(k)s throughout my life, and I’m kind of older, and almost every time there’s come a time in my life where I had to cash out. And now living expenses are so high, I just can’t afford to put anything in there.”

“You’ve got to be there a certain amount of time.”

—Participant from a medium-size business in Philadelphia

“Because they don’t match.”

The survey sought to gauge how likely a series of factors were to motivate workers to contribute to employer- sponsored retirement plans. 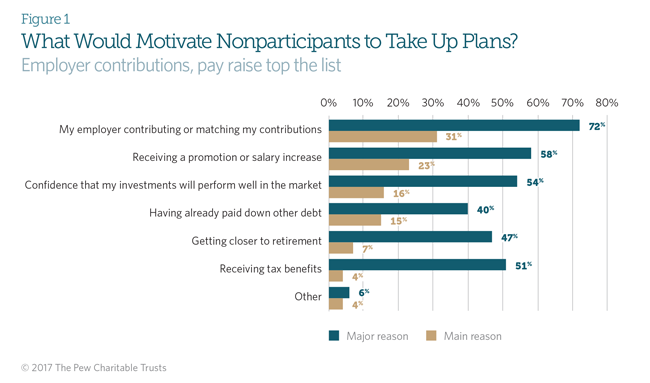 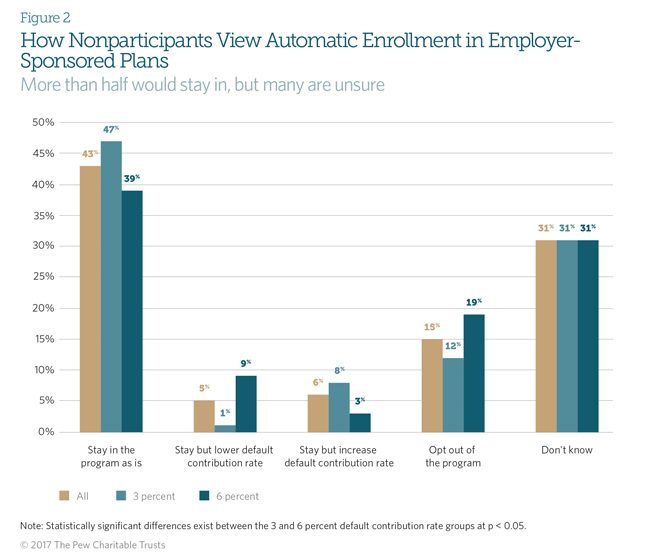 The type of industry appears to play a role in worker perceptions of automatic enrollment. Only 7 percent of those in wholesale and retail trade jobs said they would opt out, compared with 31 percent of those in production, transportation, and material moving.3 Between 10 and 15 percent of respondents in other industries said they would choose not to take part in the plan. The characteristics of an industry may help explain such differences; for example, some are more likely to have high percentages of full-time workers or have higher wages or less income volatility.4

Workers with and without access to employer-sponsored retirement plans were asked in the focus groups for their impressions of automatic enrollment in a state-sponsored auto-IRA plan.5 The survey results are not directly comparable to findings from the focus groups because workers who had access to a plan but did not participate were asked about automatic enrollment by their current employer. Still, the discussions were revealing. Although some in the groups reacted negatively to the concept of automatic enrollment in a state-backed plan, many who had experience with this feature in previous jobs saw it as a good way to encourage savings.

“I don’t feel the employer should make that choice for you.”

—Participant from a medium-size business in Philadelphia

“I think nowadays everyone tends to be really lazy. We get the notifications, but we just put it to the side. If it wasn’t for being automatically enrolled, I would have never started saving.”

—Participant from a small business in Atlanta

Participant from a medium-size business in Chicago: “Frankly, in the beginning, when I was enrolled, it was in my paperwork. You had so many documents. I’m, like, ‘Didn’t read that.’ ‘Forgot about it.’ And so when they started taking out 3 percent and I saw my check, it was a big shock.”

Moderator: “So did it bug you?”

Participant: “In the beginning. But now I wish I could even contribute more. I’m happy that it’s there.” 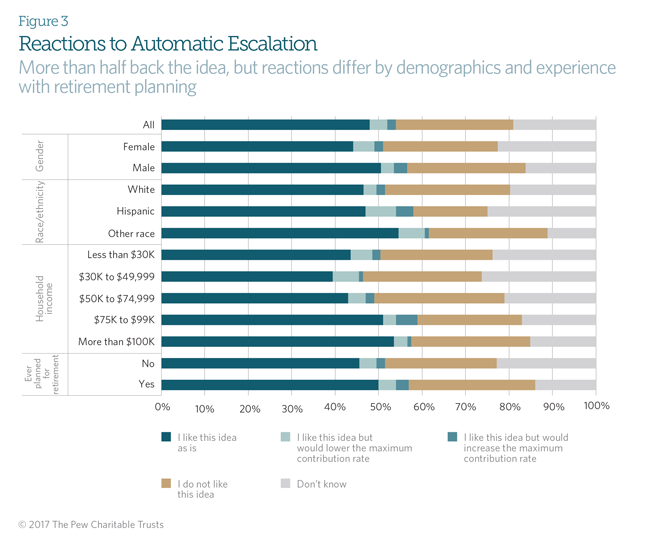 Some demographic groups may be more averse to investing for the future because they have less disposable income. For example, Hispanic Americans are more likely to face unemployment than white Americans.6 These realities may make certain groups more hesitant to lock away a higher percentage of their incomes if they may need that money before retirement.

Employers and policymakers looking to address retirement insecurity by increasing participation in and contributions to retirement plans can do so via plans that make it easier for workers to save. The survey and focus groups indicate that there is no single factor, such as employer contributions or a pay increase, that would motivate workers to voluntarily participate in available employer-sponsored plans.

However, the survey found that at least half of those who have chosen not to participate in a workplace plan might do so if automatically enrolled. Moreover, the differences in perceptions among demographic groups on automatic enrollment were slight, suggesting that it could be an effective means to close gaps in participation.

At a time when many Americans struggle to set aside enough money for retirement, government policymakers and employers are increasingly considering programs to help them save, known as pro-savings tools. And recent surveys by The Pew Charitable Trusts show that workers at small to midsize businesses&mdash;both those that have workplace retirement plans and those that don&rsquo;t&mdash;generally support these ideas.&nbsp;