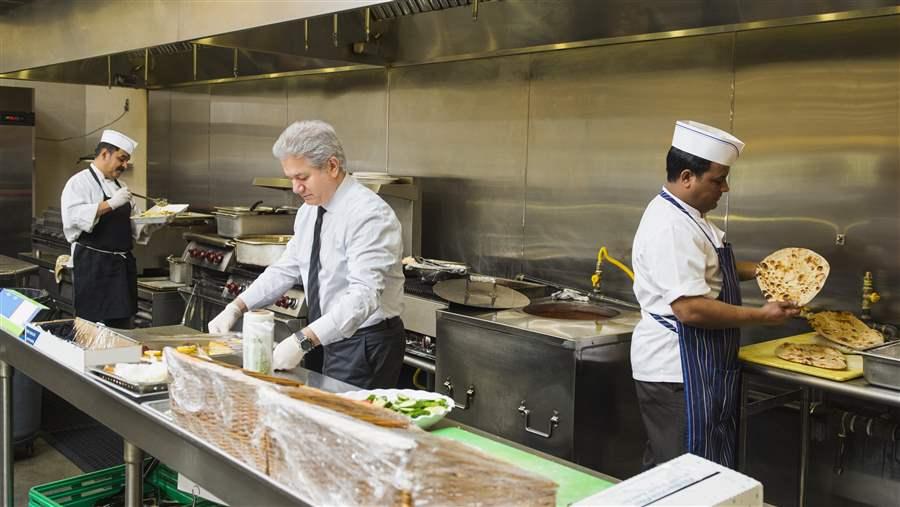 Most Americans save for retirement through a workplace retirement plan, such as a 401(k) or 403(b).1 Still, more than one-third of full-time American workers lack access to this kind of plan, and access varies widely depending on a worker’s industry. Access to and participation in a retirement plan often depend on whether an employee is part time or full time, with part-time workers consistently less likely to have the option—or to choose—to join an employer-based program.2 Further, employers in certain industries are more inclined to offer retirement benefits to their employees than are those in other industries. A Bureau of Labor Statistics study shows that workers in “lower hour industries”—where part-time work is more prevalent, such as retail trade; arts, entertainment, and recreation; and hospitality and food service—are less likely to receive health insurance, paid time off, and, notably, access to employer-sponsored retirement plans.3 As for other retirement outcomes—including plan participation, barriers to participation, and plan balances—the data are still incomplete.

This chartbook examines access to and participation in defined benefit, or traditional pension plans, and defined contribution plans, such as 401(k), based on a combination of work status and industry type, specifically focusing on the distinctions between industries that predominately employ full-time versus part-time workers. The analysis uses data from the U.S. Census Bureau’s Survey of Income and Program Participation (SIPP). “Workers” refers to 18-to-64-year-old private-sector full- and part-time employees who were not self-employed, agricultural workers, or in the armed forces at the time of the survey. The chartbook builds on The Pew Charitable Trusts’ previous analysis of SIPP data by looking more closely at industry type.4 The key findings are:

The following charts delve more deeply into these findings. As policymakers address retirement security, this chartbook outlines clear differences among the retirement preparedness of employees working in different types of industries, which can inform policy decisions, and raises additional questions for future research. 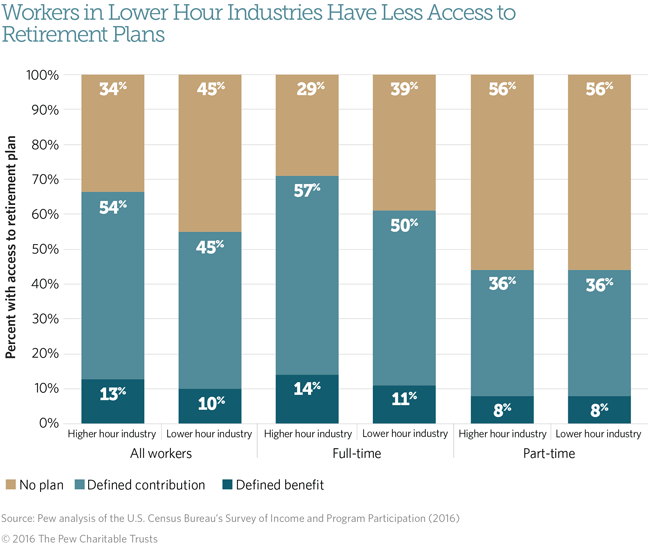 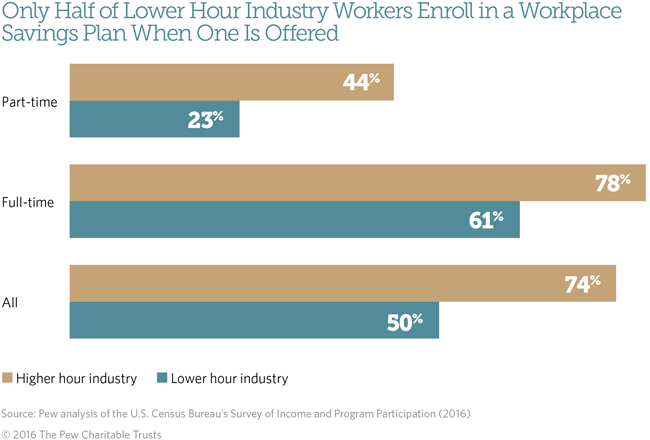 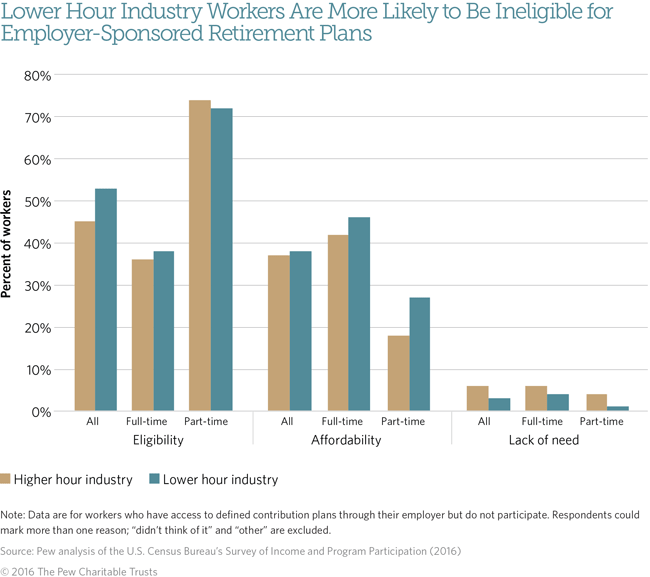 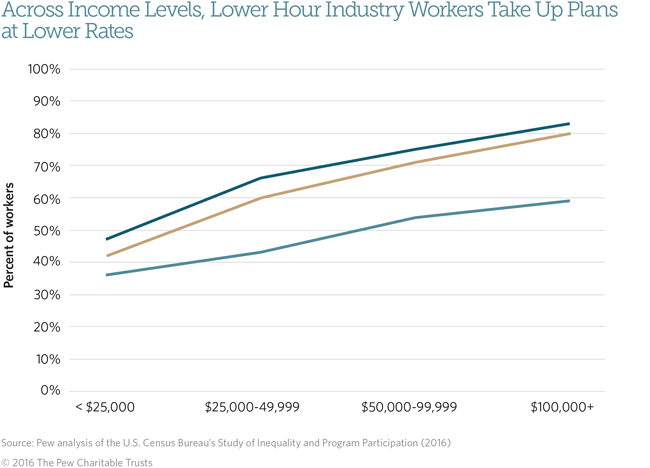 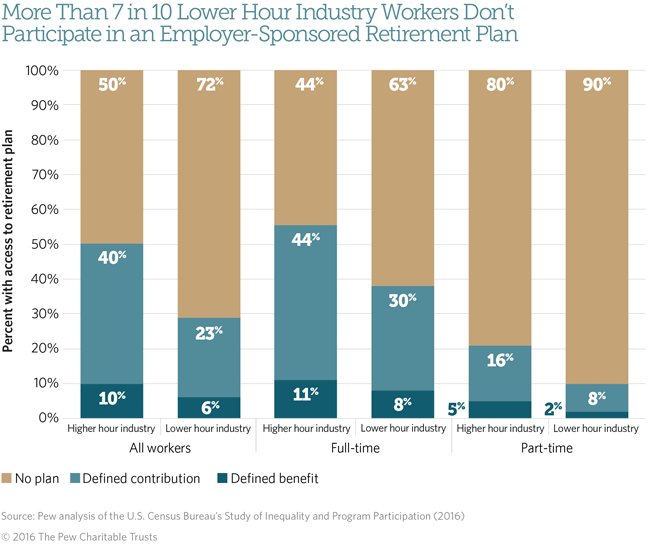 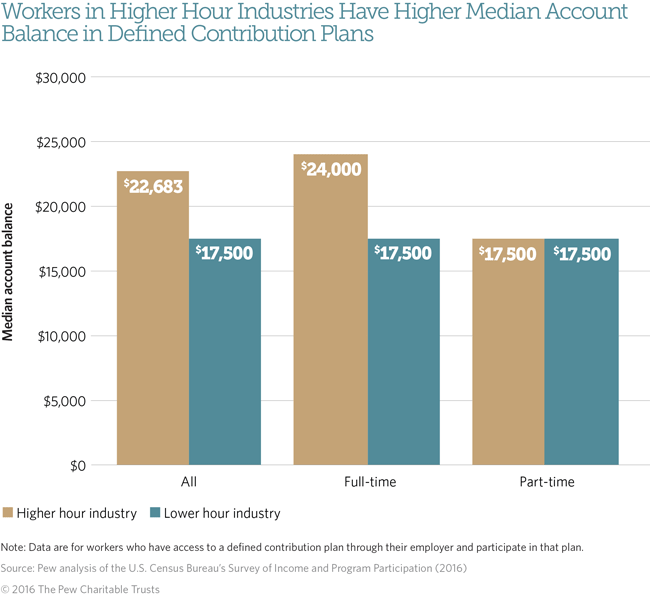 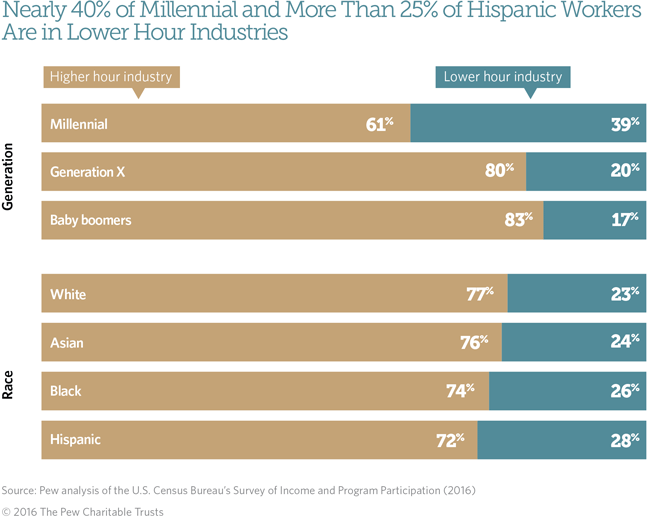 Employer-sponsored retirement plans play an important role in the accumulation of household retirement savings. Still, many workers lack access to such plans or fail to participate when they are offered. This chartbook examines how industry type may shape the opportunity and ability for workers to save for retirement. Workers in industries with a high proportion of part-time employees have lower access and participation rates as well as lower savings.

As policymakers consider ways to increase retirement savings, this chartbook outlines the importance of focusing on the characteristics of both employers and workers in lower hour industries. For example, these workers include groups with lower rates of access to employer-sponsored retirement plans, such as millennials and Hispanics. However, even among employees with access to a plan, the participation rate and the median plan balance are smaller for workers in lower hour industries. Further research that examines why workers in these industries do not participate at rates comparable to those in higher hour industries would provide policymakers with valuable information. For example, additional data might demonstrate that part-time and younger workers face steeper economic challenges in saving for retirement. A one-size-fits-all retirement policy that would merely provide private sector workers without an employer-sponsored plan the opportunity to save would not reduce these financial security hurdles. Similarly, creating a marketplace exchange for small businesses to shop for retirement benefit products may not address the particular competitive challenges facing employers in lower hour industries. This chartbook also points to the significance of the eligibility barriers that keep many workers from participating in their employer’s retirement plans.

This chartbook uses the most recent available retirement-related data from the U.S. Census Bureau’s Survey of Income and Program Participation (SIPP), a multiple cross-sectional and longitudinal study of various economic topics. Specifically, it relies on data from Wave 11 topical module focused on retirement savings plans conducted in 2012, using participants from the 2008 panel. The sample includes 18-to-64-year-old private sector full-time and part-time employees who were not self-employed, agricultural workers, or in the armed forces at the time of the survey (n = 23,166).12 Pew identifies two main types of employer-sponsored retirement plans: defined benefit plans (in which the employer primarily contributes to the fund) and defined contribution plans (in which the employee primarily contributes to the fund). Because respondents did not explicitly state whether their employer offered either of these categories, we construct these categories based on various characteristics.13