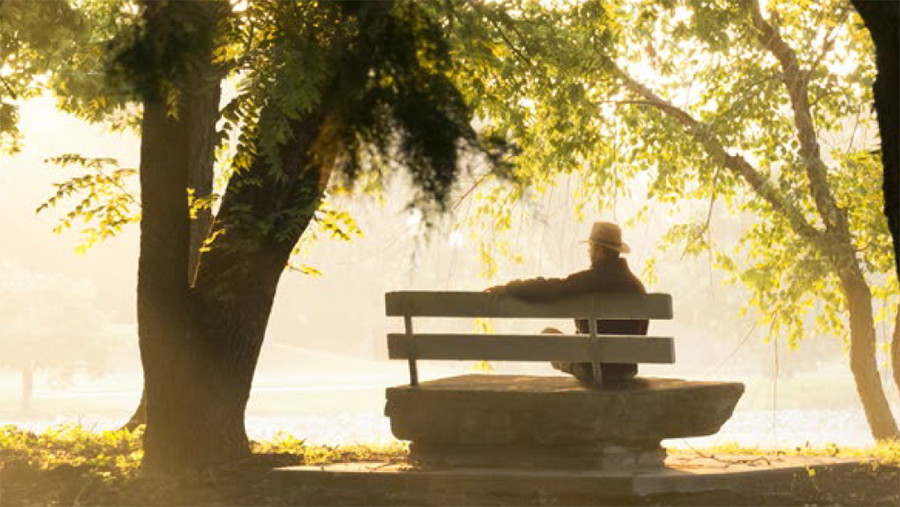 Most Americans will rely, in part, on personal savings during retirement. However, many households face substantial challenges in building their retirement nest egg. U.S. workers accumulate most of their retirement savings through their jobs, but more than one-third of full-time employees lack access to a workplace retirement plan. Even for workers who have access to a plan, obstacles—such as their debt, other savings priorities like children’s college funds or a house down payment, immediate financial needs, or a lack of confidence in their ability to choose investments wisely—can discourage participation.1 And among those who participate, savings are generally modest.

Many states and the federal government are looking at ways to increase retirement savings. The aim is to reduce poverty and the need for social assistance—spending that strains state budgets. Some of these efforts are already underway, including President Barack Obama’s myRA initiative, Washington state’s marketplace exchange, and Illinois’ Secure Choice program.2

This chartbook examines data from the U.S. Census Survey of Income and Program Participation. In this analysis, “workers” refers to 18- to 64-year-old private sector full-time and part-time employees who were not self-employed, agricultural workers, or in the armed forces at the time of the survey.

This chartbook is the first in a series of publications that will examine the challenges of retirement savings. 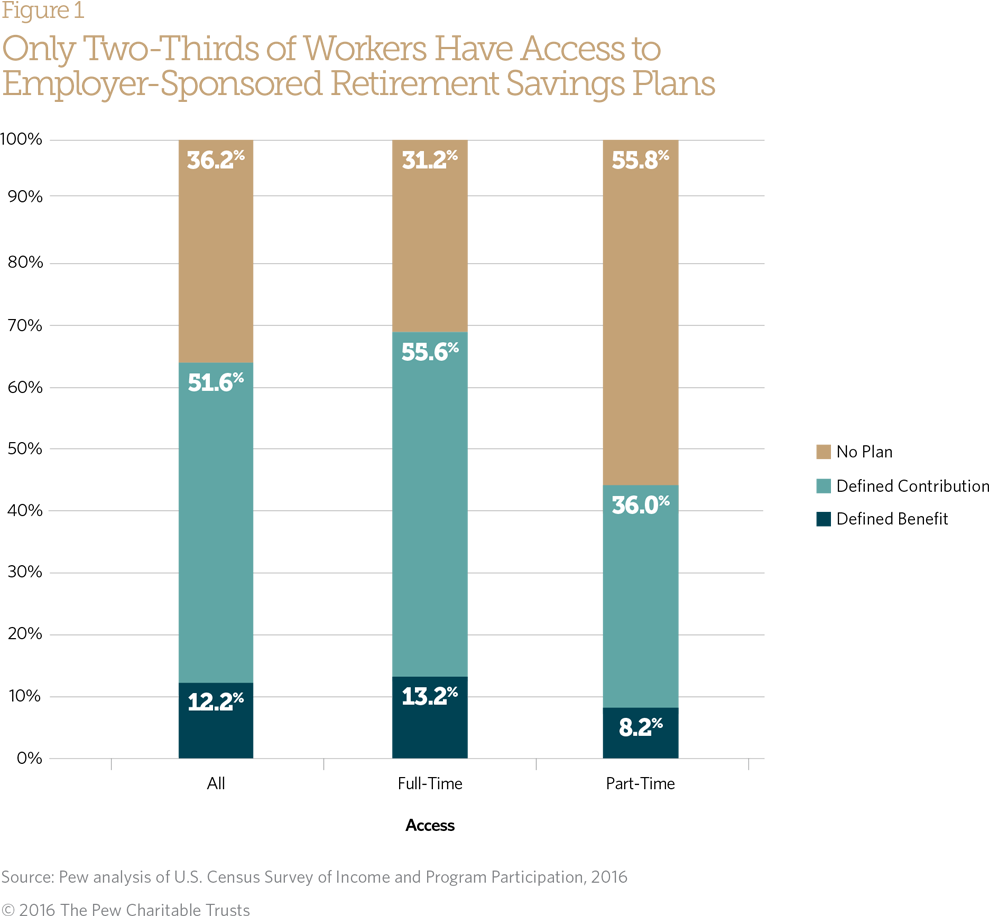 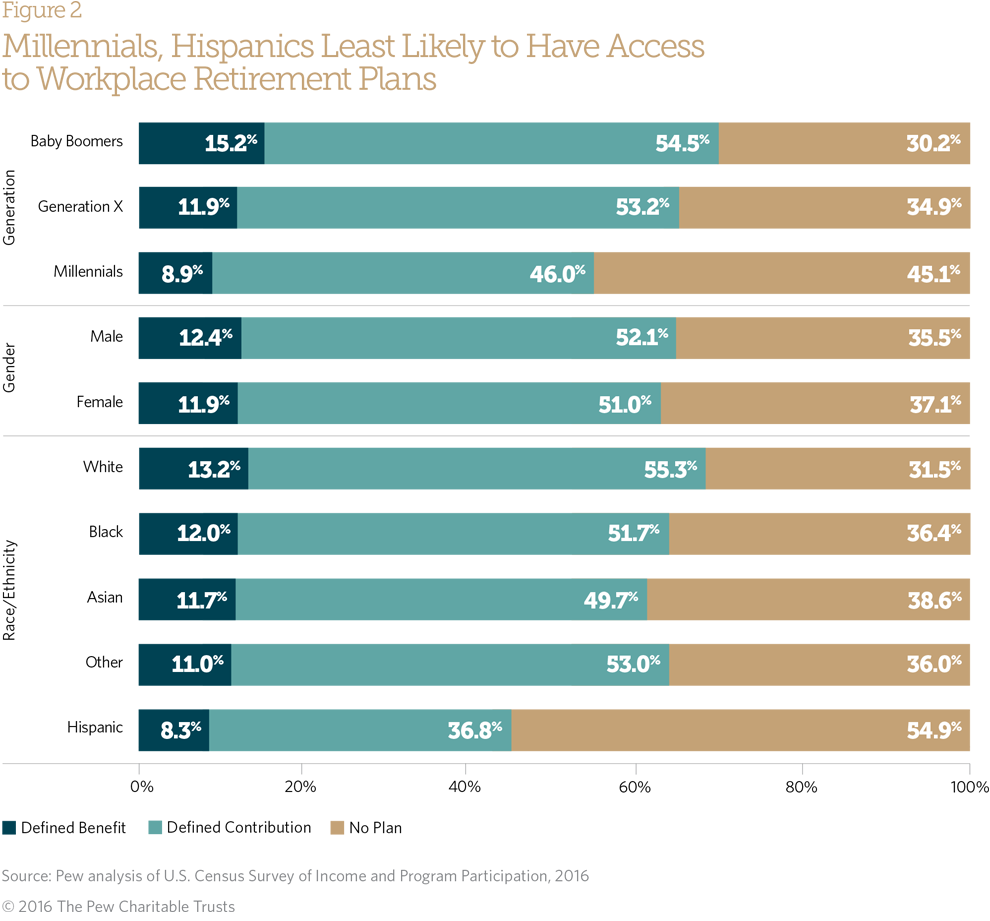 Access to employer-sponsored retirement savings also differs by generation, gender, and race/ethnicity.4 Millennials are most likely to work for employers who do not offer plans; 45.1 percent of millennials lack access versus 30.2 percent of baby boomers and 34.9 percent of Generation Xers.5 Comparing racial and ethnic groups, Hispanics fare worst and are 40 percent more likely than Asians and 72 percent more likely than whites to report working for employers without plans.6

Men and women report similar rates of access to employer-sponsored plans. Future publications in this series will look more broadly at outcomes, such as participation and individual plan balances, comparing men and women. 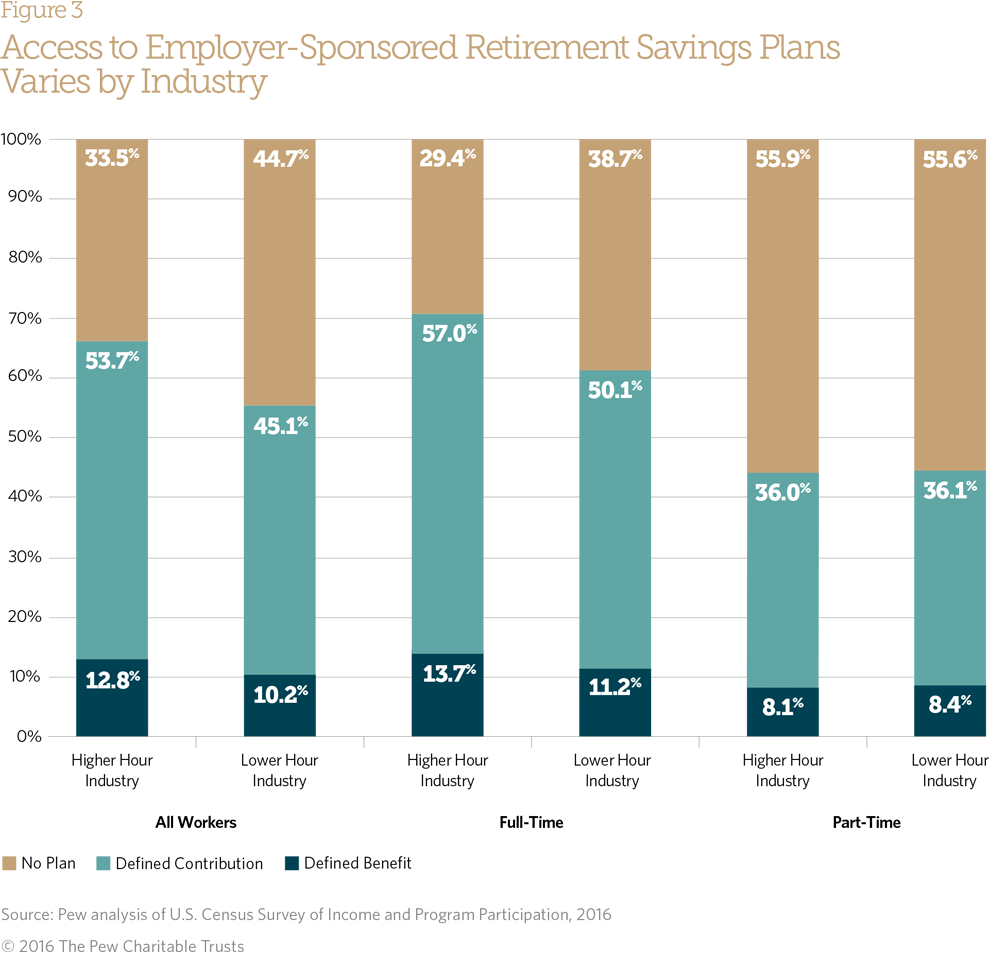 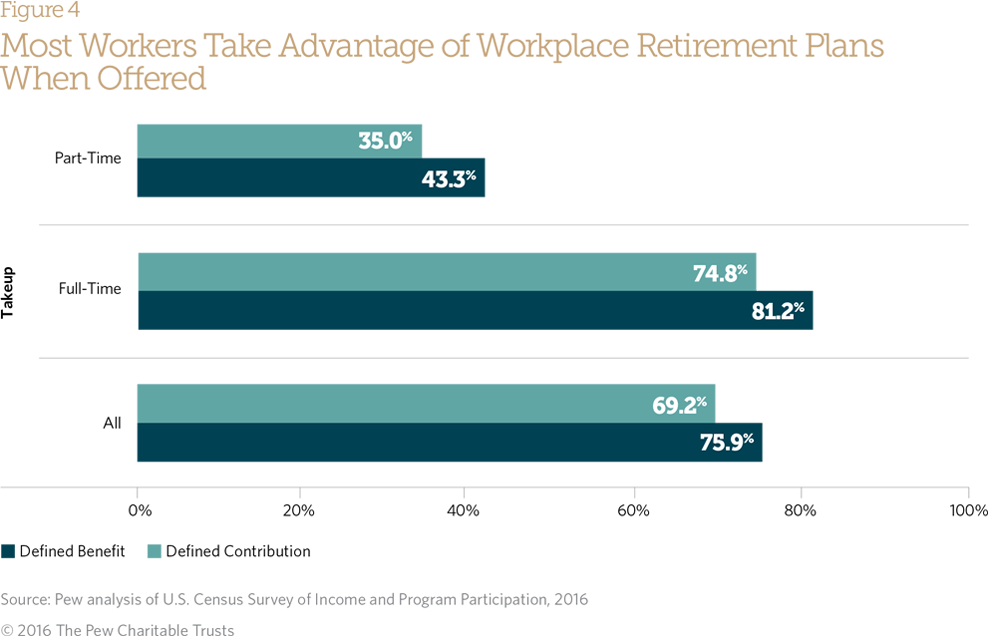 Retirement plan takeup measures participation among those with access to a plan. The analysis of takeup shows significant differences between full- and part-time workers, full-time workers take up at nearly double the rates of part-time workers. 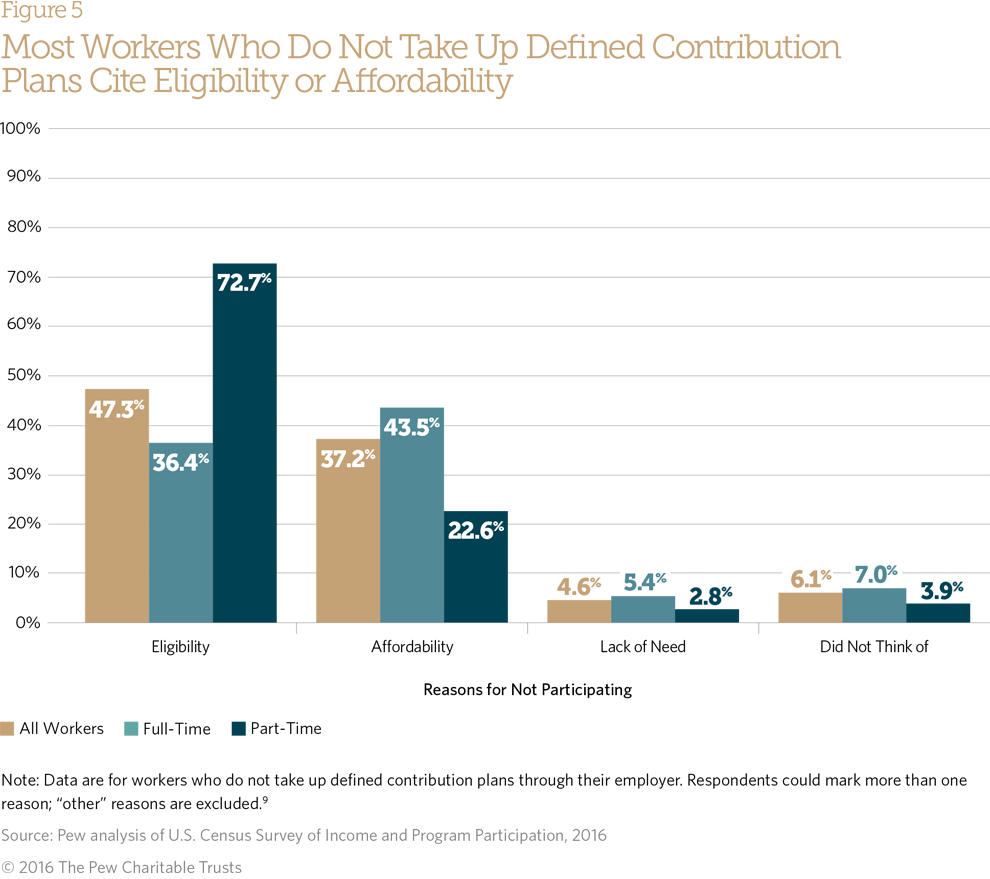 Even when workers have access to plans, the plan rules, such as requiring a minimum number of hours to participate, may effectively prevent participation in these plans: For example, almost three-quarters of part-time workers who do not participate say they were ineligible. This suggests that the 72.7 percent of part-time workers who are ineligible for the plan that their employer provides may effectively be the same as workers who do not have any plan at their workplace.

Affordability was the top concern among full-time workers; 43.5 percent of those who did not participate cited affordability issues. Some workers may feel they have too little disposable income to contribute to a retirement plan while others may be saving their money for other purposes. 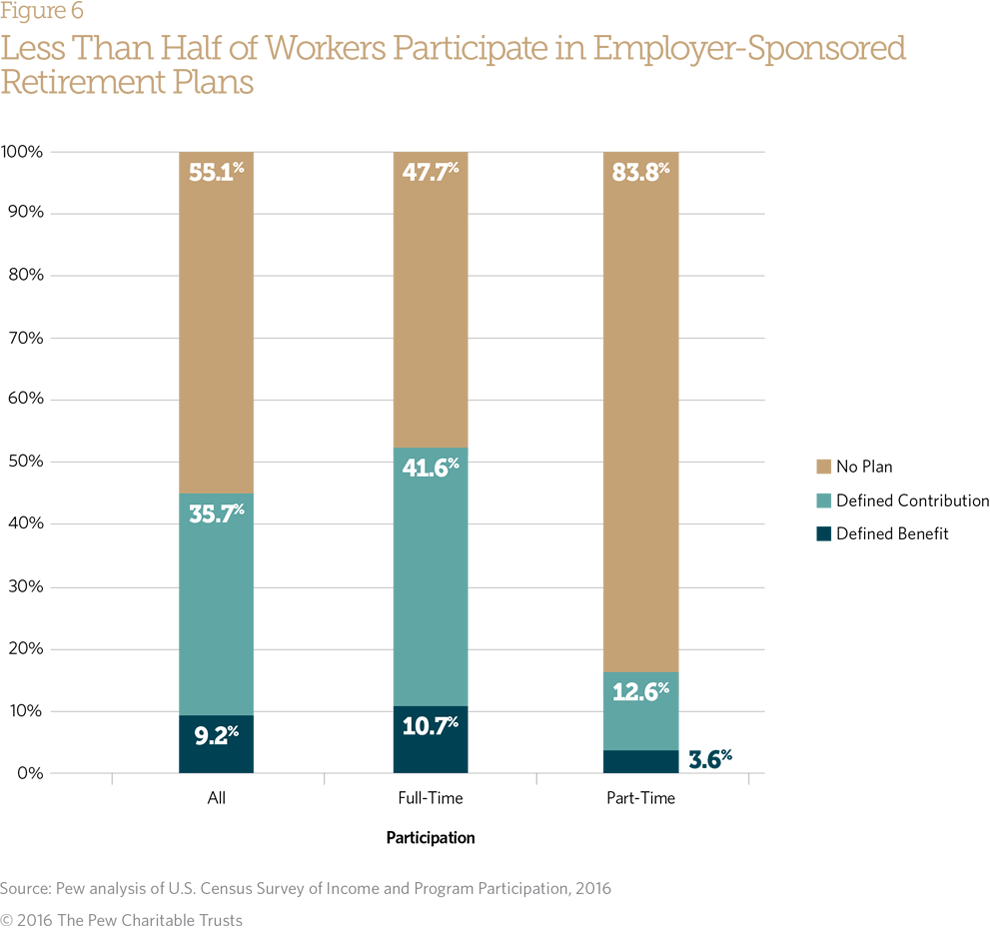 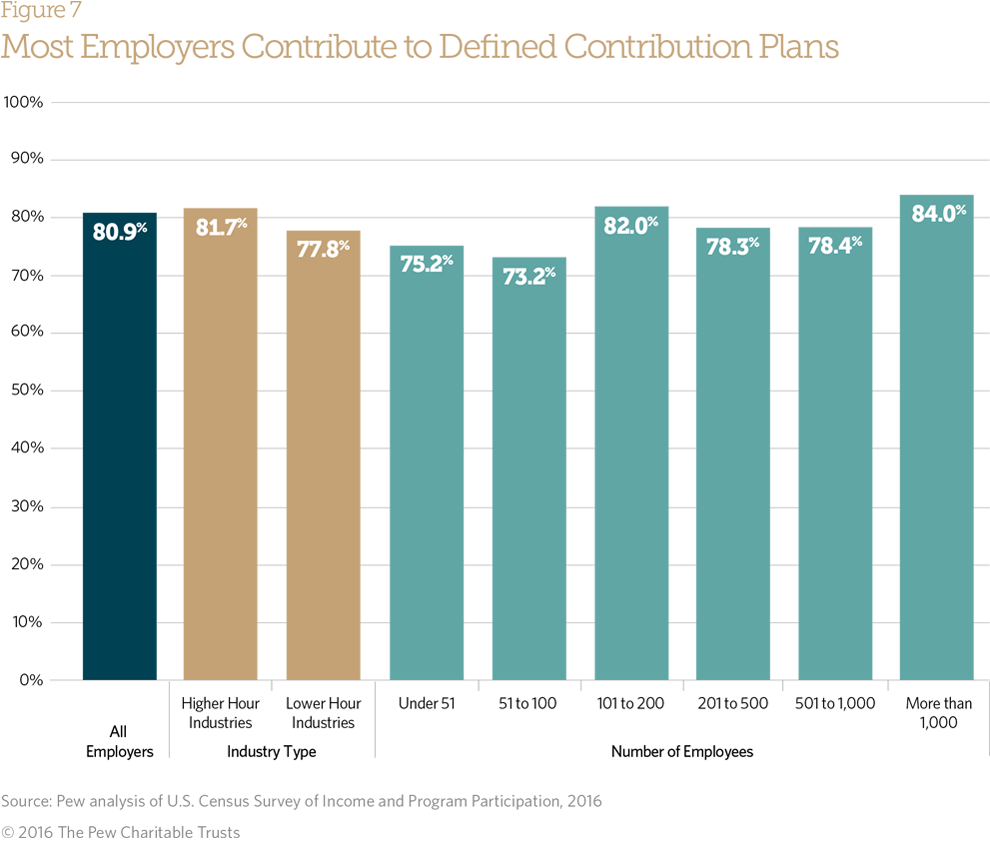 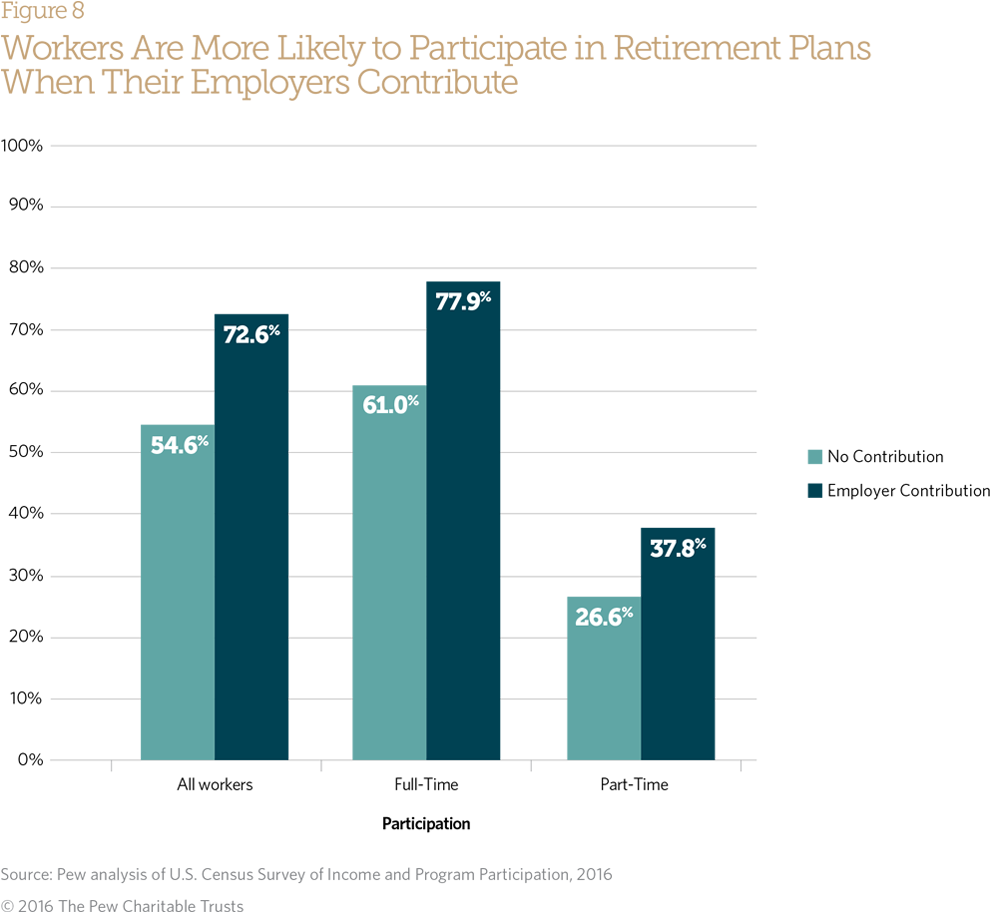 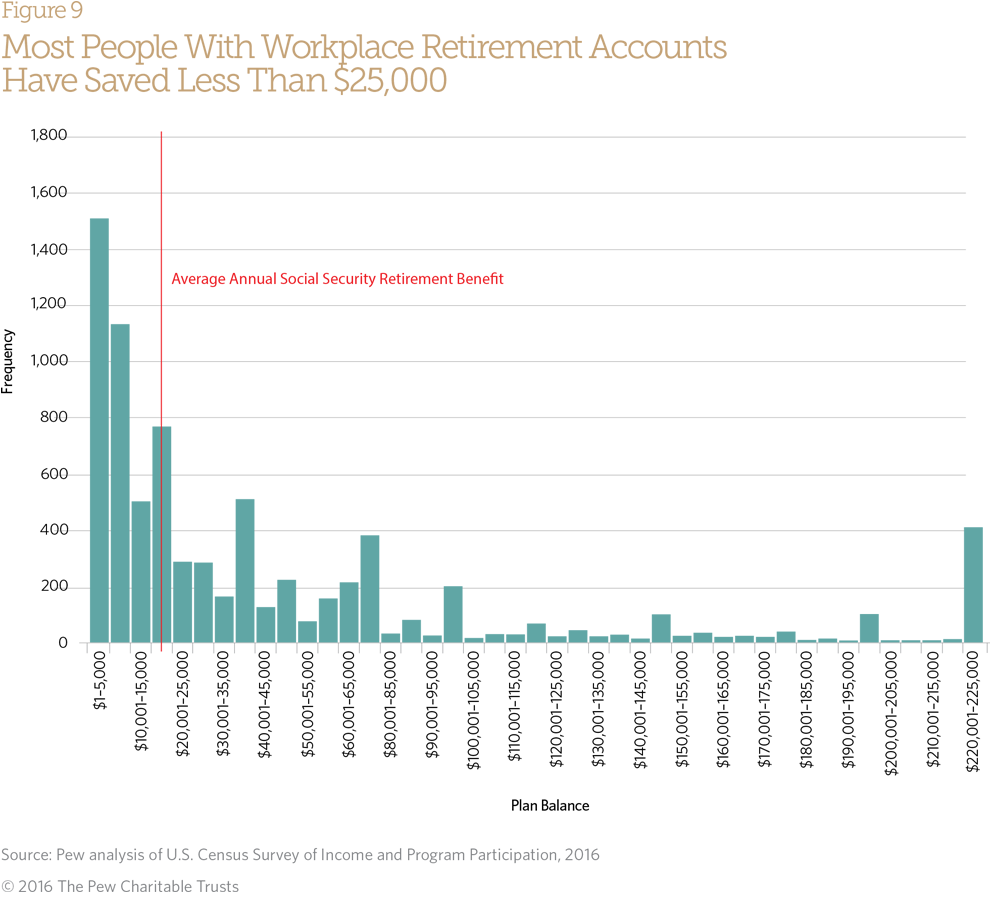 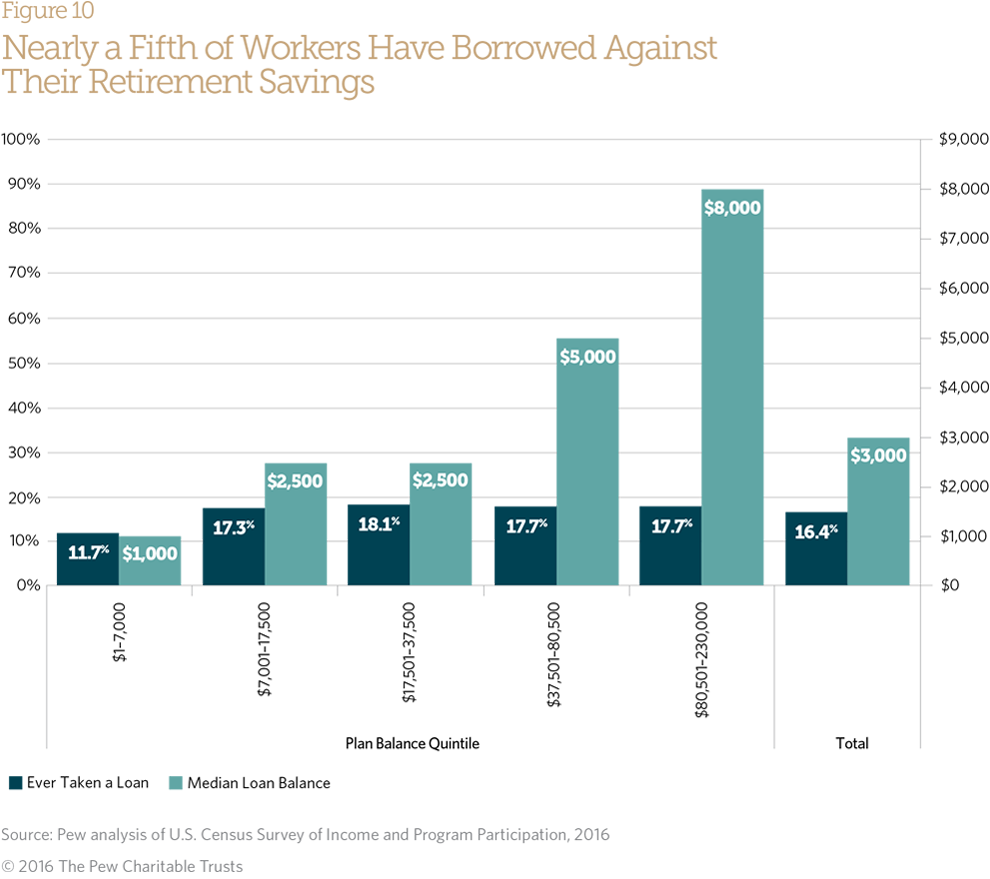