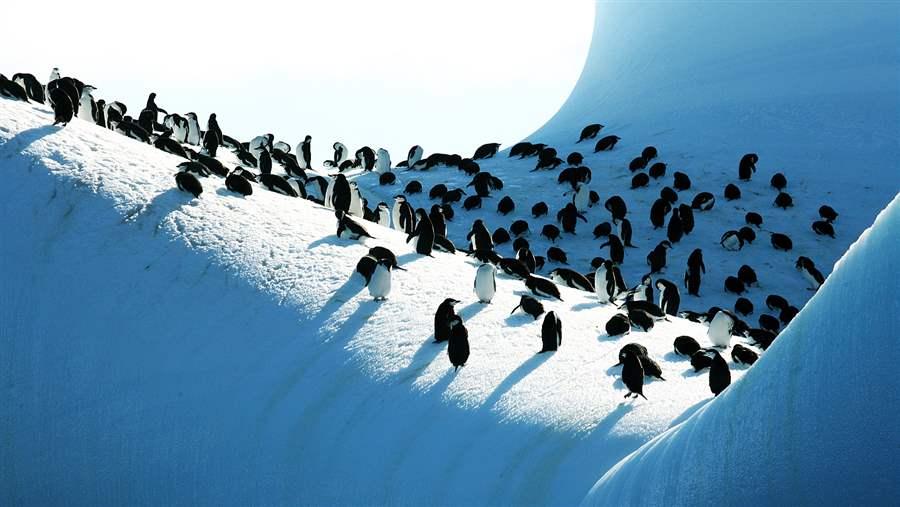 Chinstrap penguins congregate on an iceberg off Vindication Island in the South Sandwich Islands.

In a remote and wind-swept area of the Southern Ocean, over 2,500 kilometres east of South America, sits South Georgia and the South Sandwich Islands. The islands and the surrounding seas are teeming with wildlife, including penguins, whales, fur seals, and albatrosses. Such globally significant wildlife—and the fact that a large proportion of these waters are isolated and unexploited by people—makes the area ripe for strong conservation efforts.

The surrounding marine environment—1.07 million square kilometres of ocean—was legally designated as a marine protected area (MPA) in 2012. However, only 2 percent of that zone is fully protected, with no fishing or other resource extraction allowed. The other 98 percent is classified as “sustainable use,” meaning it is open to varying levels of industrial fishing.

The local government is reviewing the MPA this year, with a focus on whether existing conservation measures offer adequate protection for the unique marine habitat. In September 2017, the Pew Bertarelli Ocean Legacy Project, working as part of the Great British Oceans Coalition—which also includes the Blue Marine Foundation, Greenpeace, the Marine Conservation Society, the Royal Society for the Protection of Birds, and the Zoological Society of London—called for full protection of the waters around the South Sandwich Islands archipelago, an area of over 500,000 square kilometres (twice the size of the U.K.).

Unlike the waters surrounding South Georgia Island, those around the South Sandwich Islands are rarely targeted by industrial fishing vessels and harbour an incredible volume of wildlife, including nearly half of the world’s chinstrap penguins. Further, the archipelago is the only arc of active volcanoes in the Southern Ocean. The surrounding waters contain unique deep-sea hydrothermal vent ecosystems, seamounts, and the South Sandwich Trench, which at 8 kilometres is the ninth-deepest place in the oceans. 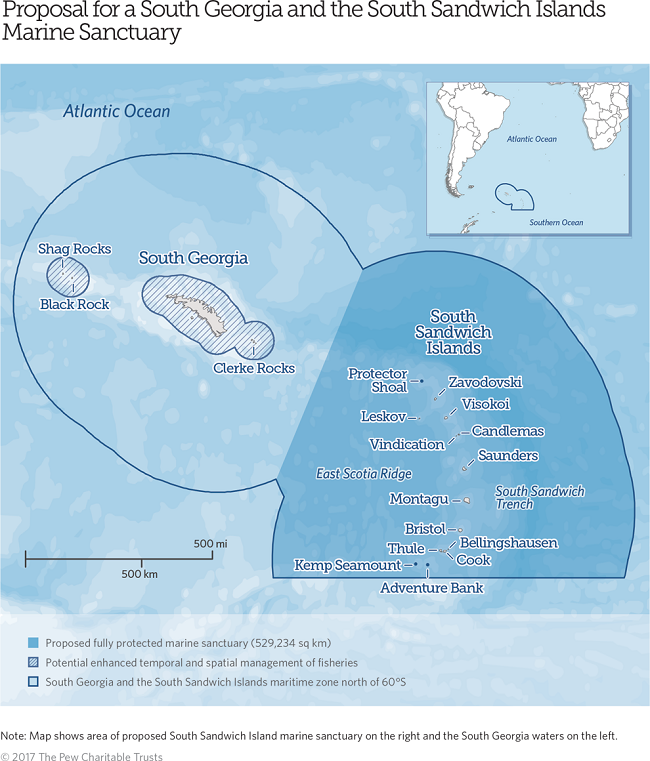 In November 2017, Great British Oceans initiated a “Blue Belt Charter” asking the British public to encourage their Members of Parliament to support a number of ambitious proposals for marine protection around the U.K. overseas territories. These included enhanced protection of the ocean areas around Ascension, Tristan da Cunha, and St. Helena islands. The call for a fully protected South Sandwich Islands MPA was the leading proposal in this document.

The charter coincided with the release in the U.K. of the BBC series “Blue Planet II,” which drew over 10 million viewers—an indication of strong public interest in the marine environment. So far, 280 MPs—more than half of those eligible to support the charter—have signed on. They represent eight parties, making it clear that there is broad political backing for the government to take action.

Establishing the fully protected MPA there would deliver a gold-standard reserve and show that the U.K. takes seriously its role as a global leader in marine protection. Such action in the Southern Ocean could also build momentum for further protections around Antarctica in the Weddell Sea, East Antarctica, and the Antarctic Peninsula. The Commission for the Conservation of Antarctic Marine Living Resources (CCAMLR), the multi-governmental body that sets policy for fishing and other human activity in the Southern Ocean, has committed to a network of marine reserves in the region. The Ross Sea Region MPA and the South Orkney Island Southern Shelf MPA are the first reserves in the network that CCAMLR has established.

To see the awe-inspiring wildlife of the South Sandwich Islands and learn more about the opportunity to protect the area, watch the video below, which is narrated by Lewis Pugh, a U.N. patron of the oceans who has swum in Antarctica, the Artic, and elsewhere to raise awareness of the need to protect our marine environment.

Simon Reddy is the director and Johnny Briggs is an officer with the Pew Bertarelli Ocean Legacy Project’s U.K. campaigns.
AUTHORS