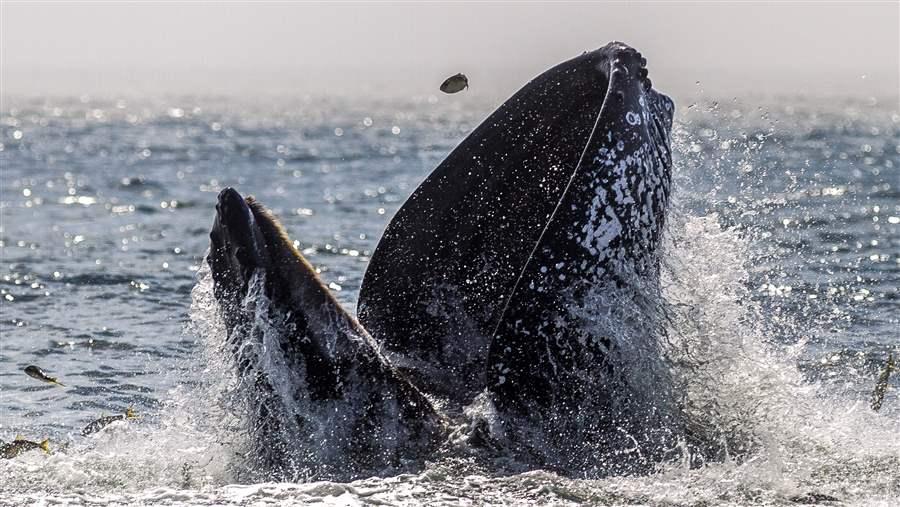 A humpback whale feeds on menhaden off New York City in 2014.

Note: This post was updated Nov. 7 after the Atlantic States Marine Fisheries Commission released supplemental material revising the number of public comments it received from 127,260 to 158,106.

Members of the Atlantic States Marine Fisheries Commission, which sets rules for fishing in state waters along the Eastern Seaboard, will gather Nov. 13 to vote on how to manage menhaden, one of the Atlantic Ocean’s most important prey fish. In the waters off the East Coast, Atlantic menhaden feeds nearly every commercial and recreational species of fish, as well as marine mammals such as humpback whales and dolphins and many at-risk seabirds, including ospreys, bald eagles, and common loons.

It was only five years ago that the commission set the first coastwide catch limits for menhaden. Since then, a growing body of science has shown the need to manage forage fish in light of their important place in the food web. We wrote in August about the commission’s call for public comment on several management options to achieve a balanced, big-picture approach to conserving menhaden far into the future.

The Pew Charitable Trusts submitted a comment in support of Option E, which calls for managing the species based on the best available science and sets a population goal that would both sustain fishing and keep enough menhaden in the water to feed the species’ many predators. 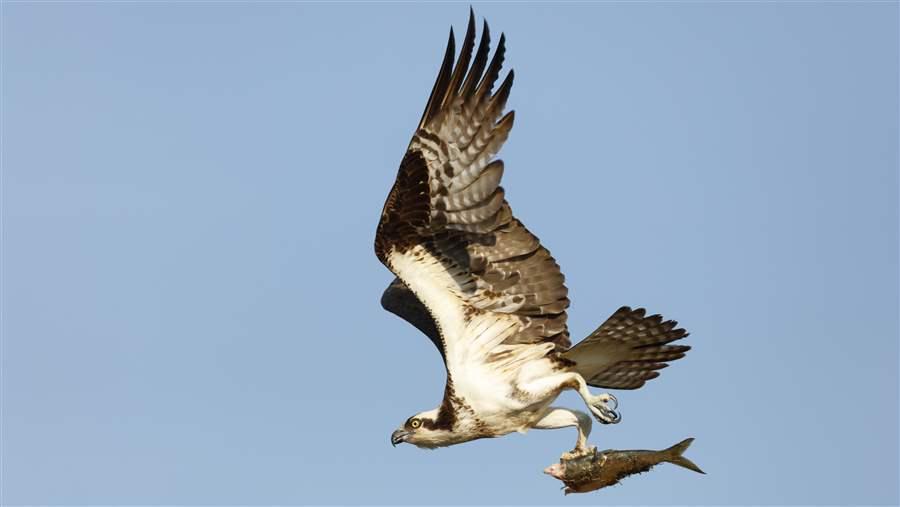 An osprey carries a menhaden off the Massachusetts coast. Numbers of the forage fish, which feeds a variety of sea life along the U.S. Atlantic Coast, are increasing in its historic range from Maine to Florida, and state managers are weighing how to sustain gains.

The commission recently posted a summary and supplement detailing the more than 158,000 public comments it had received. The documents exceed 3,600 pages and highlight the overwhelming public interest in menhaden.

Even more striking than the sheer number of comments is the support for managing menhaden in light of the essential role it plays in the ecosystem—backing that surpasses even the strong support voiced earlier this year. Here’s a snapshot:

The issue has drawn media attention at the national level from outlets such as the Associated Press, ABC News, and National Geographic and in states including Connecticut, Delaware, Florida, Maryland, Massachusetts, New Hampshire, New Jersey, New York, North Carolina, Rhode Island, and Virginia.

When members of the commission’s Menhaden Management Board meet in Baltimore on Nov. 13, they will have heard a clear message from the public. They should vote for Option E, the best strategy for keeping enough menhaden in the water to feed predators. Doing so would heed overwhelming public support and show that the board recognizes the importance of Atlantic menhaden to our coastal communities and the healthy marine ecosystems they depend on.