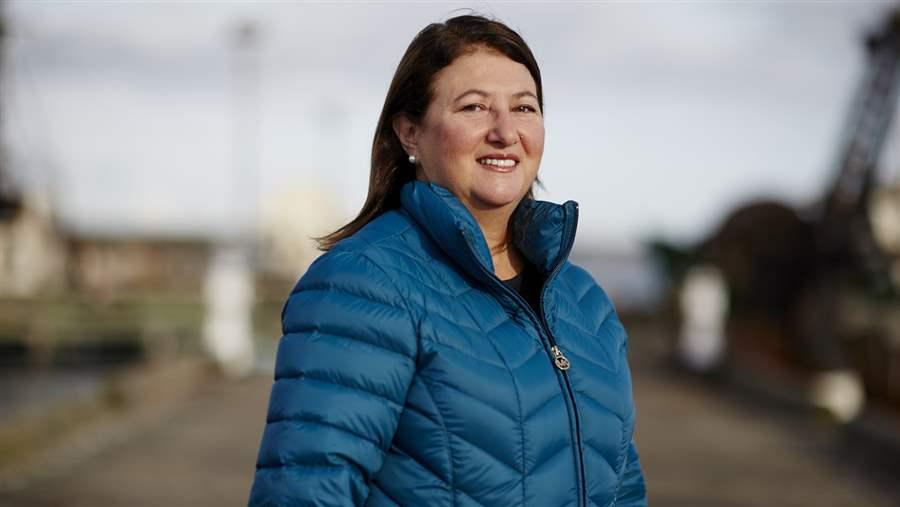 Ellen Pikitch, a marine biology professor and director of the Institute for Ocean Conservation Science at Stony Brook University, studies Atlantic menhaden and other forage fish along the U.S. East Coast.

In October, Ellen Pikitch, former chair of the Lenfest Forage Fish Task Force, submitted a letter on behalf of more than 100 scientists to the Atlantic States Marine Fisheries Commission in support of managing menhaden, a forage fish, from an ecosystem perspective. The public comment period is open through Oct. 24, and the commission will make its decision Nov. 13.

Q: How did you end up studying fish and ocean food webs?

A: I knew from an early age I wanted to do something that had to do with the ocean. I grew up in Brooklyn and went on day trips to the beach at Coney Island nearly every day of the summer. I would explore the beach and the water and play little games; it was endlessly fascinating. I ended up perfecting a technique for catching little fish in the water before they swam away, and eventually I could catch them pretty much every time. They were silversides, a type of forage fish.

Q: What are forage fish, and why do they matter?

A: Forage fish are small-bodied fish that are usually found in large, dense schools and have short life spans, maybe 10 years maximum. Most people are familiar with forage fish like sardines, anchovies, and herring, which they’ve seen in cans; on the East Coast, menhaden are the primary forage fish. Forage fish eat phytoplankton, which get their energy from sunlight, and zooplankton, which feed on other plankton. And larger fish, like cod, tuna, and striped bass, feed on forage fish. I like to say that forage fish convert sunlight into striped bass.

Q: How are menhaden doing?

A: If you look at the menhaden population in isolation, it is in okay shape. But when you look at it from an ecosystem perspective—whether there are enough to feed predators—menhaden are much less numerous than they ought to be. On the East Coast, menhaden used to range from Nova Scotia to Florida, but we haven’t seen that kind of distribution for probably 50 years.

Q: What decision are managers facing for menhaden now?

A: The Atlantic States Marine Fisheries Commission, which is made up of representatives from states along the East Coast, will decide in November whether to keep the status quo for menhaden or move forward with an ecosystem-based approach. The status quo is treating menhaden as if they were an island unto themselves; as if they don’t eat other species; as if nothing depends on them; as if they don’t compete with other species. The commission is required to use the best available science, and a large body of science supports the view that you should account for the role of forage fish in the ecosystem when you make management choices.

I submitted a letter to the commission on behalf of more than 100 of the top ecologists and fisheries biologists. We are urging them to move forward with ecosystem-based management for menhaden. We shouldn’t kick the can down the road when we have an excellent solution that is ready to use now and is already in use elsewhere.

Q: Why do scientists think forage species should be managed differently from other fish?

A: If we fail to account for the role of forage fish like menhaden in the ecosystem, we can suffer very detrimental consequences. It happened with anchovies off Peru, which at one point represented 10 percent of the entire world’s catch. When that population collapsed, seabirds and marine mammals couldn’t find enough food, so many of them also died. While forage fish, with their short life spans, could rebuild relatively quickly after a collapse, the seabirds, sea lions, whales, sharks, and tuna that feed on them have longer lives and lower reproductive capacity, so they can’t bounce back as quickly. What resulted was a very degraded ecosystem.

Q: How should forage fish be managed?

A: Forage fish should be managed so that their population is high enough to support the predator species that depend on them, as well as fishing. Managers have been using standards, known as reference points, which consider only the fishing part of that equation. But forage fish should be maintained at a higher level than other kinds of fish—as scientists would say, we need a higher population target for forage fish—because they are so critical to the health of other species. And if the population falls below a critically low level, we need to avoid collapse by taking prompt action, such as by shutting down fishing. The management standards should reflect reality and be based on ecology. This is what scientists mean when they call for ecological reference points.

Q: What can other people do to help menhaden?

A: Your voice matters, and I encourage anyone who is reading this to let your opinion be heard. You can submit your comments directly to the commission until Oct. 24. And until the day of the vote, which is scheduled for Nov. 13, you can contact your state wildlife and fisheries officials to let them know that you want them to vote for ecological management of menhaden.