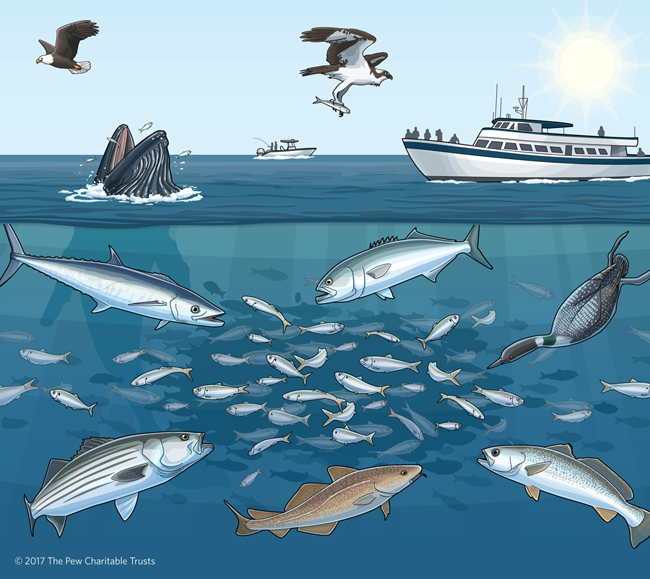 It all centers on menhaden. This conceptual illustration shows some of the species that feed on Atlantic menhaden in the waters off the U.S. East Coast. Having enough of these forage fish in the ocean to feed predators is critical to maintaining a flourishing marine ecosystem. People benefit too, through better fishing and more opportunities to view wildlife—both of which boost local businesses and strengthen coastal economies. State fishery managers from Maine to Florida should set catch limits to protect menhaden’s important role in the ecosystem. Clockwise, from top center: osprey, bluefish, loon, weakfish, cod, striped bass, king mackerel, humpback whale, and bald eagle.

Note: This post was updated Sept. 27 and Aug. 31 to reflect changes in hearing locations, dates, and the end of the public comment period, which were announced by the Atlantic States Marine Fisheries Commission.

In just a few months, fishery managers along the U.S. East Coast will make a major decision that will determine the long-term future of one of the region’s most vital species—and the state of the larger Atlantic Ocean ecosystem it powers. Atlantic menhaden, which some fisheries experts call “the most important fish in the sea,” are at the center of the debate—and the food web. On Nov. 13 and 14, the Atlantic States Marine Fisheries Commission (ASMFC), which coordinates the conservation and management of 27 nearshore fish species from Maine to Florida, will set not only the 2018 catch limit for menhaden but also a course for the future. How the commission views menhaden’s role as prey for wildlife in the broader ecosystem will affect hundreds of millions of these fish.

Menhaden move in large schools, feeding on some of the ocean’s smallest creatures: phytoplankton and zooplankton. In turn, the forage fish are hunted by marine predators, including striped bass, tuna, bluefish, whales, and tarpons, as well as by ospreys, eagles, and loons. Menhaden’s essential role is to transform and transfer energy from the bottom of the food web to the top.

Unfortunately, the ASMFC has not yet delivered on its long-stated desire to consider menhaden’s ecological role when setting catch limits off the Atlantic coast. Until 2013, there were no catch limits on this essential fish. Even today, according to ASMFC, about 400 million pounds of menhaden are taken from the Atlantic Ocean every year, more than any other fish on the East Coast. The population is at near-historic lows and is no longer abundant throughout its full historic range, from Maine to Florida. Menhaden end up not on American dinner plates but in commercial products such as fish oil, animal feed, fertilizer, and bait—part of the reason they have been easy to overlook.

As we wrote last year, conserving menhaden is a smart investment. When enough menhaden are left in the ocean, their predators are healthier and more abundant. And as the value of recreational fishing, seafood, and tourism businesses that depend on these species increases, communities along the entire coast benefit.

By setting catch limits for menhaden that account for their ecological role, the ASMFC can significantly advance our country’s commitment to modern, science-based management of fisheries. But there’s no guarantee the commission will do the right thing to ensure a brighter future for the Atlantic Coast, which is why your voice matters.

Through Oct. 24, the commission is seeking public comment to help it choose the best options for updating its menhaden management plan. In a document known as Amendment 3, the ASMFC outlines several paths toward a balanced, big-picture approach to conserving menhaden far into the future. We invite you to join us in voicing your opinion for the smartest options available.

In the section of Amendment 3 on reference points, The Pew Charitable Trusts supports “Option E.” If this option is chosen, the Commission would follow the best scientific advice on how to use markers known as ecological reference points (ERPs) to set catch limits for forage fish. The goal would be to leave enough menhaden in the ocean—75 percent of the population level before fishing began—to serve as food for predators. Option E would also set a threshold of 40 percent of that pre-fished level below which the population should not fall, a limit that scientists have concluded is needed to prevent predator populations from suffering. It would allow a dedicated group of experts to continue their work identifying ERPs that are specific to Atlantic menhaden for use in management measures. Of the choices laid out in Amendment 3, this is the surest way to help menhaden return to abundance throughout its full historic range.

Pew also supports a catch cap of 51,000 metric tons (Option B) in the Chesapeake Bay, which is the most important nursery for Atlantic Coast juvenile menhaden and where commercial fishing of the species is focused. This cap would help secure the future of the menhaden population itself, as well as the many predators that feed on juvenile menhaden here.

Here are four ways you can make a difference:

By taking this meaningful, lasting step to protect menhaden, the ASMFC can ensure a brighter future for the species and the entire Atlantic Coast. Please join us in encouraging the commission to do the right thing.

Fisheries Managers Should Listen on Menhaden

The small Atlantic menhaden, which plays an important role as prey in the ocean, could have a big year in 2017, as we wrote recently. This month, fishery managers received a clear message in public comments that have poured in on how to manage Atlantic menhaden: Conserve the species for its contribution to the marine ecosystem.