To End Overfishing in the EU, Parliament Should Wield Its Influence 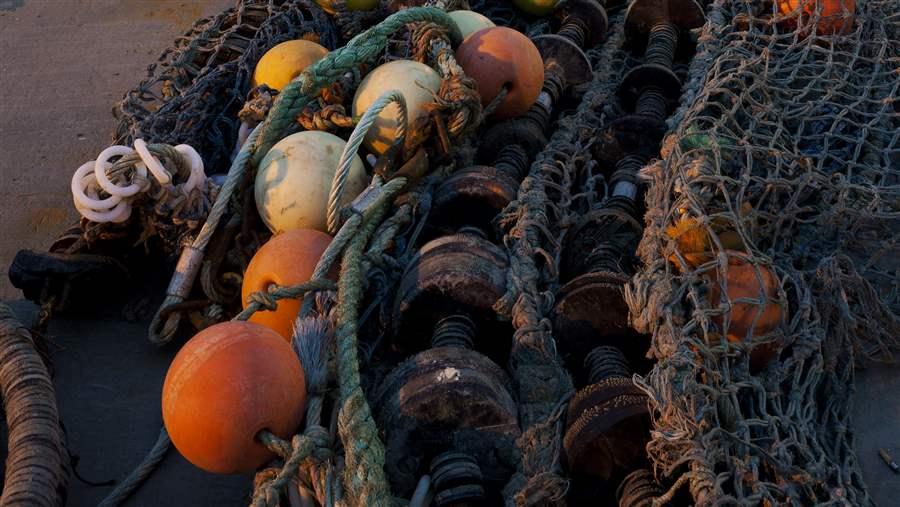 Fishing nets lie empty at a European port. Without intervention from the European Parliament, overfishing in the EU may continue.

Back in 2013, officials from each European Union member state and the EU’s institutions rightly celebrated the reform of the EU’s Common Fisheries Policy (CFP). After decades of management failings, the EU had finally agreed to end overfishing and created a legally binding, time-bound commitment to achieve that objective. This was great news, only slightly dampened by the message from member state fisheries ministers that they “needed a few more years to do it gradually.”

The reform process had taken more than five years, marked by tough negotiations between members of the European Parliament (MEPs) and member-state governments. Such progressive commitments take a great deal of patience and political groundwork to secure, and that’s before the implementation work even begins.

The reformed CFP has been in place for 3½ years, and the delays in its implementation highlight the continued reluctance of ministers to finish the job.

Recent data from the European Commission’s Scientific, Technical, and Economic Committee for Fisheries (STECF)—a body of scientific experts—reveal the gap between the current state of fish stocks and CFP commitments. For stocks on which detailed scientific advice for high, long-term yields was available, 41 percent were found to be overfished in 2015. And it is clear, from The Pew Charitable Trusts’ own analysis using data from 2017 fishing limits, that this progress to end overfishing remains slow: Overall, we found that fisheries ministers set 54 percent of fishing limits for this year higher than the scientific advice, which means that more than half of EU fish stocks are still likely to be overfished. These data also included stocks subject to less comprehensive scientific advice. 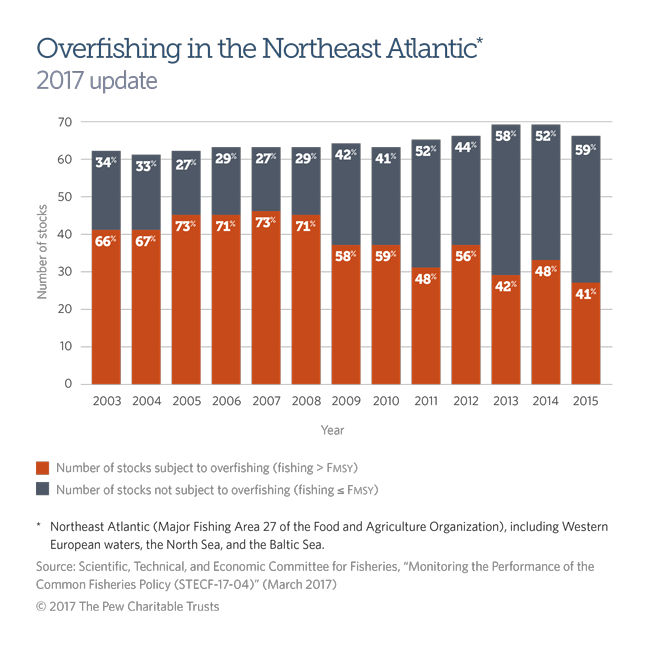 The latest figures from the European Commission's Scientific, Technical, and Economic Committee for Fisheries confirm that overfishing continues. According to this year’s report, 41 percent of fish stocks were still being overfished in 2015.

Only three years remain for the EU to meet the legally binding deadline to end overfishing by 2020. Those involved in the CFP reform were not naive about the political undertow that swirls around the annual Council decision-making process on fishing limits. Indeed, this is why the CFP includes a requirement for “multi-annual plans” (MAPs) that introduce a long-term perspective to a particular fishing region to ensure that the CFP’s objectives will be implemented and met. Fisheries committee MEPs will consider the latest MAP proposal, for the North Sea, at their July meeting. The Council has made its position clear: The same fisheries ministers who find it hard to resist setting limits higher than scientific advice also favour watering the MAP proposal down. Ministers would like to set weaker objectives than required in the CFP for some categories of stocks and have tried to find ways to set fishing limits higher than the ceilings the CFP requires.

This is a familiar story, with a wide expanse of clear blue water between what MEPs hope to achieve and what fisheries ministers will commit to doing. After the hard fight to secure these important reforms, MEPs must now hold reluctant member-state governments to account for implementing that legislation.

This involves much more than scrutinising member-state government actions. MEPs have the responsibility to actually decide on these MAPs with the Council, and therefore have the power to demand strong legal provisions. A number of MEPs in the committee are already taking this power seriously by proposing amendments to counteract the Council’s attempts to dilute proposed MAPs and even in some cases acting to improve the Commission’s original proposal.

Until the Council can demonstrate that it is willing to take action to meet the CFP’s rapidly approaching deadlines, we look to those MEPs who are demanding urgent progress and, crucially, ensuring that MAPs are not watered down but instead bolstered to secure an end to overfishing. These MEPs deserve loud and enthusiastic support for their efforts to keep fisheries ministers to their word.