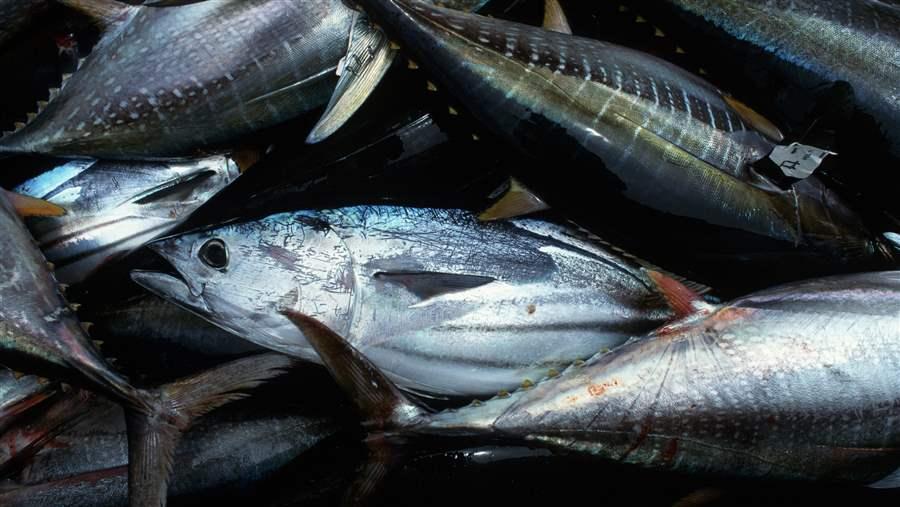 Skipjack and yellowfin tuna are among the valuable species found in the Pacific Ocean.

Tunas are remarkable creatures, with torpedo-shaped bodies that are ideal for both speed and endurance swimming. The bluefin can travel at up to 45 mph, dive to 4,000 feet, and live up to 40 years. Some can top 1,500 pounds. Yellowfin tuna are fiercely loyal to their schools, and most tuna species are warmblooded.

Tunas are also vital commercial species, with bluefin highly sought after for sushi, and skipjack and albacore landed in great numbers to supply the global demand for affordable canned fish. Together, seven tuna species account for $42.2 billion in retail sales annually.

Those are among the reasons the United Nations in 2016 officially recognized May 2 as World Tuna Day, following the lead of eight Pacific island nations that established the tradition in 2011. Those nations are part of the world’s largest tuna fishery and make up the Parties to the Nauru Agreement (PNA), through which they set rules for fishing the species throughout their waters.

A day to celebrate tuna makes sense: Most people have recently eaten tuna or seen it on a menu. From Atlantic and Pacific bluefin served in high-end sushi restaurants to skipjack and albacore in cans on supermarket shelves and yellowfin at the fish counter, tuna is found across cultures and around the world, and is an important source of protein for millions.

What’s not working: Pacific bluefin on the brink

Unfortunately, the demand and popularity of tuna have created crises for some species. Nine out of 23 stocks, or 39 percent of all tunas, are classified as overfished. Unsustainable catch has significantly decreased some populations and may bring one species, Pacific bluefin, to the brink of extinction.

Pacific bluefin have been fished down to just 2.6 percent of the species’ historic size, and catch limits have been ineffective at ending overfishing. This situation can be attributed largely to the failure of the Inter-American Tropical Tuna Commission and the Western and Central Pacific Fisheries Commission to take the steps needed to safeguard these fisheries. Smart management should include cutting catch limits—deeply—to allow the species to recover. But neither commission has heeded the science, and overfishing continues unabated.

That’s why The Pew Charitable Trusts and its partners have called for a two-year moratorium on commercial fishing of Pacific bluefin. This would immediately end overfishing and give the species a chance to recover. This year is a true test for Pacific bluefin management: Without a fishing moratorium, or at least effective fishing limits, the only option for saving the species may be an international trade ban.

In PNA waters, skipjack is king and has never been overfished, in part because it reproduces quickly. PNA governments are developing a new system, called harvest strategies, for managing skipjack in their waters and the wider region. This system would include a set of pre-agreed rules that would determine what steps would be taken if the population started to decline. The goal is to create a process for proactive management—before skipjack can become overexploited. Having harvest strategies in place can avoid the political gridlock that often gets in the way of effective stock management.

A significant portion of skipjack is caught by purse seiners using fish aggregating devices (FADs), floating artificial rafts that attract many fish. Although they are used to target skipjack, FADs are partially responsible for the severe depletion of bigeye tuna, which is now at less than 20 percent of its historic, unfished population size in the western and central Pacific Ocean. 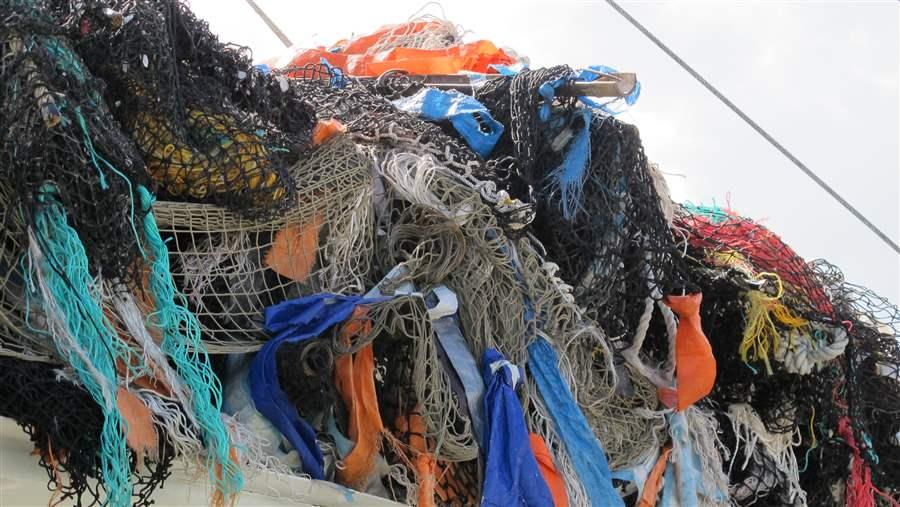 FADs can be made of a variety of materials and are deployed from purse seine vessels that use them to attract fish.

To better understand the scope and impact of FADs, PNA governments have led the way in the use of modern technology, such as electronic monitoring to track the devices—collecting near real-time data that can inform fishery management and enforcement. The PNA could become the first fishery to oversee all FAD use in its waters.

The International Commission for the Conservation of Atlantic Tunas (ICCAT) is also using technology to improve fishery management, having adopted a comprehensive electronic tracking and monitoring system for Atlantic bluefin catch and trade, primarily to help close loopholes and eliminate illegal fishing. This species is highly prized for sushi and sashimi around the world, primarily in Japan.

This system is just one example of the positive action by ICCAT in recent years. Most significantly, ICCAT has also committed to transition to more effective and stable harvest strategies for priority stocks, including bluefin and tropical tunas. To prove they are serious about effective fishery management, ICCAT managers must stick to the five-year deadline they set for themselves in 2016.

ICCAT must honor its science-based commitments

While Atlantic managers are making strides in better management, last year’s ICCAT meeting was a step backward for the eastern Atlantic and Mediterranean stock of bluefin tuna. After reducing catch limits in 2009 on these fish—a move that spurred an almost immediate uptick in the stock and praise from an independent review panel—ICCAT reversed course in 2016, voting to increase the quota beyond the level recommended by scientists. This is a backslide into the risky decision-making that plagued ICCAT for decades. If the commission doesn’t step up this year and act on its commitment to science-based management of Atlantic bluefin tuna, it will risk a return to overfishing. 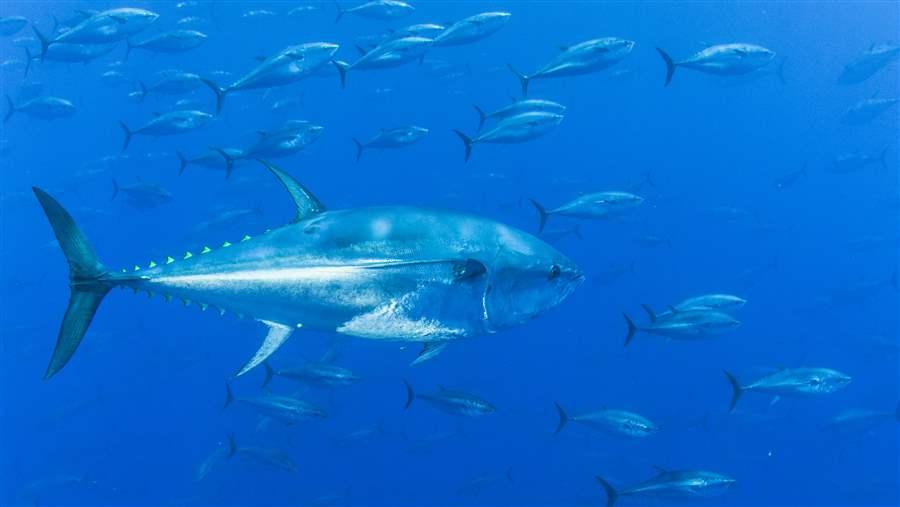 Atlantic bluefin tuna are large, migratory, and found in the western and eastern Atlantic Ocean and Mediterranean Sea.

Despite poor management of some tunas, particularly Pacific bluefin, the overall progress report for all tuna species is promising. With foresight and smart policies, fishery managers can improve the prospects for these magnificent fish and give us even better news to share next year on World Tuna Day.

As you take a bite of your tuna sandwich today or sit down to a sushi dinner, think about where that fish came from and how much it means to cultures and economies around the world. Today isn’t only about tuna fishing nations and fishermen; it’s about everyone who has a stake in healthy fisheries and a healthy ocean.

Related Resources
Pew Calls for Moratorium on Commercial Fishing of Pacific Bluefin Tuna Harvest Strategies Netting Billions: A Global Valuation of Tuna Estimating the Use of FADs Around the World