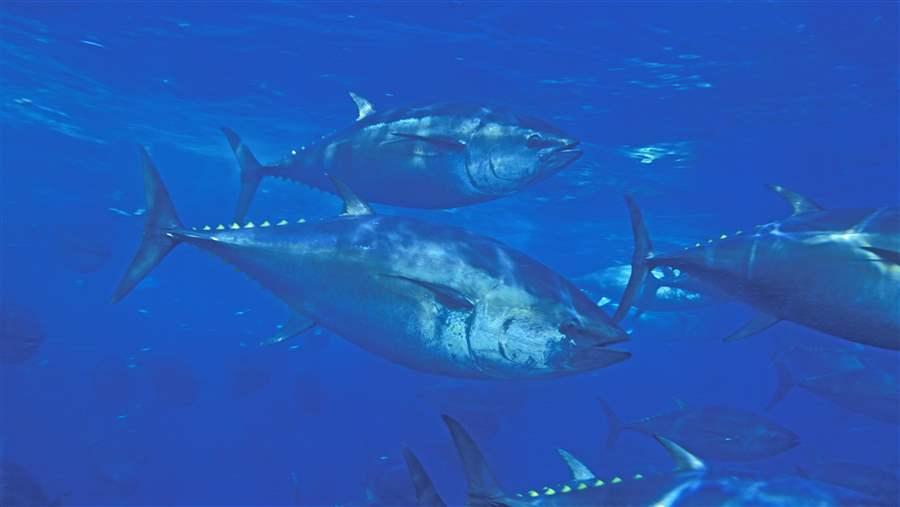 WASHINGTON—The Pew Charitable Trusts today called for a two-year moratorium on commercial fishing of the highly depleted Pacific bluefin tuna. In this year’s stock assessment, scientists found that the population is at just 2.6 percent of its historic size and that overall fishing mortality remains up to three times higher than is sustainable.

Despite that dire state, the two international bodies that manage Pacific bluefin—the Inter-American Tropical Tuna Commission, which met this month in California, and the Western and Central Pacific Fisheries Commission, which meets in December in Fiji—have failed for several years to agree on a Pacific-wide recovery plan that will end overfishing and return the population to healthy levels. Projections from the International Scientific Committee for Tuna and Tuna-like Species in the North Pacific Ocean show that under current conditions, the catch limits now in place have a less than 1 percent chance of successfully rebuilding the population over the next 20 years.

Primarily fished by fleets from Japan, Mexico, and the United States, Pacific bluefin tuna can live up to 40 years. Their fatty, deep red meat is particularly suited for sashimi and sushi, and increasing consumption has pushed the species to the brink of extinction. Although most bluefin are caught in the western Pacific Ocean, the population as a whole needs effective, science-based catch limits and an appropriate long-term rebuilding and management plan throughout its range, including the eastern Pacific.

“Scientific estimates have indicated that the population of Pacific bluefin tuna is severely depleted. Still, the governments charged with managing the species continue to deny them a viable rescue plan despite clear indications that the population is hovering near an all-time low. Commercial fishing continues at a rate up to three times higher than what is considered sustainable. This must come to an immediate end.

“Governments involved in this fishery have known for many years that they need to act in order to drive a bluefin recovery, and yet overfishing continues. An initial two-year commercial fishing ban would protect the species by ending overfishing.

“A commercial ban would also give international fishery managers an opportunity to implement an appropriate rebuilding plan. If adequate measures are not in place by 2018, a trade ban through the Convention on International Trade in Endangered Species of Wild Fauna and Flora (CITES) could be the only remaining option to safeguard the species.

“The U.S. portion of the total Pacific bluefin catch is small, usually less than 5 percent of the overall catch, and U.S. commercial fishermen have a very low impact on the stock. Still, the United States, as a member of these international management bodies, has a responsibility to act, and is well placed to catalyze international action, because its fishery managers have moved to limit pressure on the population. Last year, U.S. regulators reduced the number of Pacific bluefin that anglers can bring back from recreational fishing trips while cutting the commercial catch limit by about 40 percent.

“Pacific-wide, bluefin are now imperiled across their full range to a degree beyond anything ever seen for a tuna population. It is time for those responsible for managing this species to consider the science and use the tools at their disposal to help bluefin tuna recover.