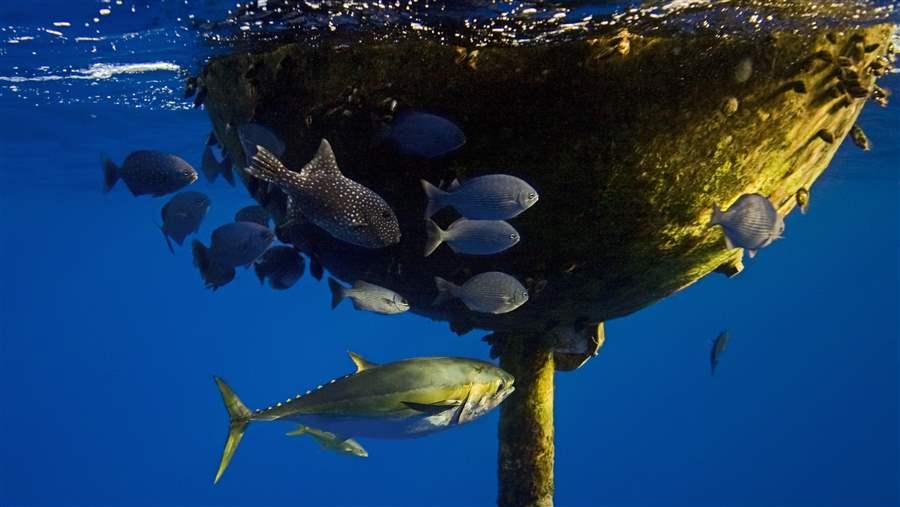 Tuna and other small fish beneath a FAD.

This report deals only with drifting FADs because of their prominence in industrial tuna fisheries. Some management measures are in place, but they are generally ineffective and fail to limit the overall number or use of these devices. Meanwhile, the proliferation of FADs continues unchecked. Observed FAD deployments have more than doubled since 2006 in the eastern Pacific Ocean alone. Still, across the world’s oceans there are few regulations for fishermen or vessel owners to follow, and no penalties for deliberately abandoning FADs at sea when they are no longer deemed useful or productive. Some RFMOs have measures intended to improve the monitoring of drifting FADs, but the overall lack of regulation makes counting these objects difficult.

Information on FAD deployments remains hard to find. Much of the data that would be needed to develop a precise estimate of their numbers exist but are confidential. The fishing industry considers this information proprietary and does not share it with regional fisheries management organizations.

In 2012, The Pew Charitable Trusts published an educated estimate of how many drifting FADs were deployed globally. The analysis concluded that the total number deployed in 2011 ranged from 47,500 to 105,000, depending on the calculation method. Using data on fishing obtained since then, along with new scientific research and an examination of recent trends in FAD use and technology, Pew has produced updated estimates indicating that the total number of drifting FADs deployed in 2013 ranged from 81,000 to 121,000. The upper estimate has increased by 14 percent since the calculations for 2011.

For this report, Pew again conducted an analysis using a patchwork of information collected and reported by RFMOs, combined with insights from confidential interviews with people in the fishing, processing, and buoy industries.

These methodologies are a best-effort attempt to characterize the scale of use of a fishing gear widely employed by the global purse seine fleet. This fleet accounts for 60 percent of the world’s catches of tropical tuna. Pew welcomes the participation of industry and fishing states in providing the data needed to develop a better estimation.

Despite the difficulties, the methodologies have been peer reviewed by external scientists. Other analyses have come to similar conclusions. For instance, the European Commission released a report in 2014 estimating that 91,000 drifting FADs are deployed annually.

Meanwhile, new initiatives are underway to better track and understand FAD use. For example, three French purse seine companies, operating in the Atlantic and Indian oceans, provided researchers with detailed tracking data of FAD movements to create the most extensive analysis yet of how FADs move in those ocean areas. Next year, the Parties to the Nauru Agreement, a group of eight Pacific island states that have the world’s largest skipjack fishery within their waters, plans to implement an electronic tracking system that will allow monitoring of FAD numbers and locations in near real time to better understand the impact on the tropical tuna fishery. This will provide useful data to fisheries scientists and managers on the use of tens of thousands of drifting FADs in the western and central Pacific Ocean. Starting in 2017, the Inter-American Tropical Tuna Commission (IATTC) will require vessels to provide additional FAD data and physically mark their FADs with unique identification codes.

Given the practical and feasible steps available to improve FAD management, Pew calls on RFMOs and fishing entities to:

The bottom line: FAD use continues to grow, the technology is evolving rapidly, and the lack of regulation threatens ocean ecosystems, undermines sustainable fisheries efforts, and jeopardizes the livelihoods and well-being of fishermen. While Pew does not advocate for an outright ban on FADs, fishing nations must properly manage this fishing gear. That begins with an understanding of just how many are used, how often, and where.

More Than a FAD: How a Tuna Industry Practice Is Hurting the Ocean