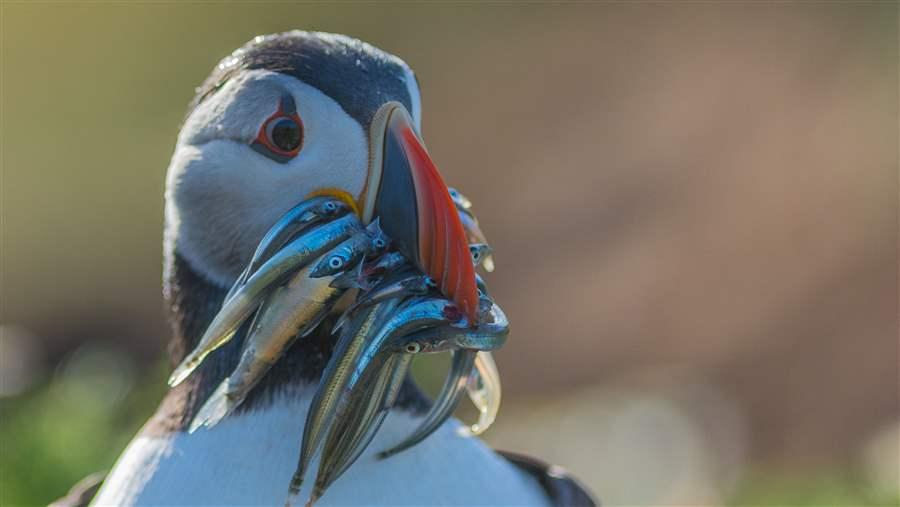 This puffin might be thinking of its voracious and fast-growing chicks as it gathers an overflowing beak-full. The availability of Atlantic herring, a forage fish, is closely linked to the survival of puffin chicks.

My kids, like most, are drawn to the wild kingdom’s charismatic hunters. Living near the Atlantic Ocean on Cape Cod, they are especially impressed with sharks, whales, seals, and birds of prey.

The predators that captivate kids’ attention are the most recognizable and identifiable part of the ocean food web, but they don’t live in isolation. The Pew Charitable Trusts’ ocean work in the Northeast focuses in part on conserving and protecting their prey: forage fish.

The iconic puffin and its preferred forage fish are at the center of one of the most dramatic stories about the interplay of species in the Northeast. Puffin parents have ravenous chicks to feed, with Atlantic herring often on the menu. Audubon scientist Steve Kress, who has long worked to track and rebuild puffin populations, noticed something different happening a few years ago. Puffin parents weren’t finding enough Atlantic herring in the water, so they were bringing back other species to their young. But these fish were too big for the chicks to swallow—so despite being surrounded by food, most chicks starved in 2012 and 2013. While high sea-surface temperatures were linked to that temporary disappearance of Atlantic herring, the stark effect of their absence on puffin survival is a reminder that we must avoid removing too many Atlantic herring through commercial fishing.

A humpback follows a moveable feast to Manhattan

Humpback sightings aren’t just for those on whale-watching boats—at least, not anymore. News outlets and websites reported numerous sightings from shore last year, perhaps none more surprising than Gotham, the humpback that took up temporary residence off New York City in the Hudson River. Always in search of a good meal, these huge predators follow gigantic schools of menhaden, also known as bunker and pogy. 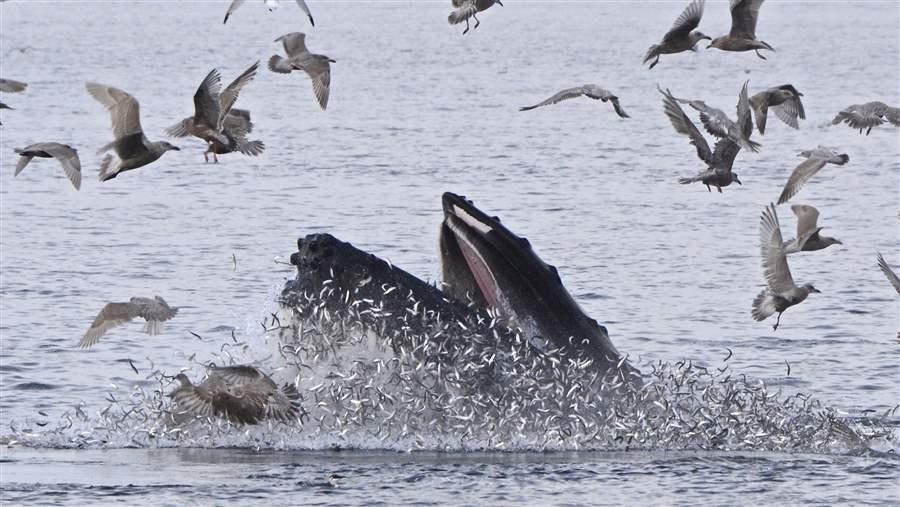 Enormous humpback whales feed on tiny fish, which they swallow in massive quantities. In 2016, humpbacks were seen lunge-feeding close to shore along the East Coast, including in the Hudson River off New York City.

While most people have heard of humpbacks, they probably haven’t heard of menhaden. And yet the fishing industry catches more menhaden along the East Coast than any other fish, with the enormous quantities ground up and sold as fish oil, back to fishermen as bait, or for use in animal feed or fertilizer. How menhaden are managed has huge implications for the ocean food web.

It’s not only seabirds and the ocean’s top predators on the hunt for small fish. Larger fish, like bluefin tuna, cod, striped bass, and bluefish, also forage constantly. The number of striped bass and other big fish available to catch is linked to the amount of food that supports their population. And unsurprisingly, those bigger fish are often found among their smaller prey, especially in important feeding or spawning areas and during seasonal migrations, where they also run the risk of becoming bycatch in nets meant to capture forage fish. 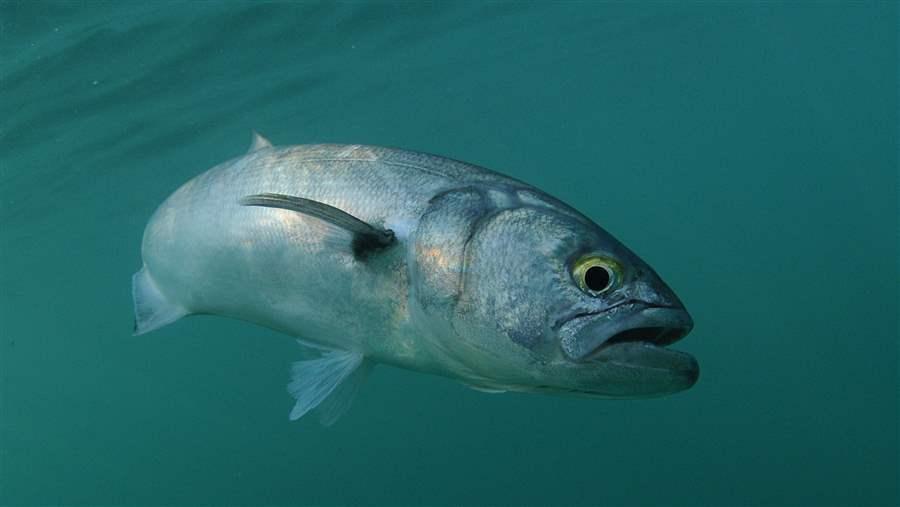 Bluefish are a favorite among East Coast recreational fishermen. Their numbers are closely tied to the availability of their prey, including menhaden, which are fished commercially in large numbers. With enough menhaden as prey, this juvenile could grow into a prize catch.

Catch limits are in place for forage species like squid, menhaden, and Atlantic herring, which are pursued on a large scale by the fishing industry. But it wasn’t always that way: The first menhaden catch limit was set in 2012, though the fish had been caught for decades. How managers set catch limits also matters. Before calculating how much forage fish the fishing industry can remove from the ecosystem, managers should consider how much ocean predators need for sustenance. Managers are already headed in this direction for menhaden, but this perspective is not yet the norm for setting catch limits on other forage species.

2. Prevent problems before they start, and rebuild depleted populations.

Usually, catch limits are instituted after a fishery has started in earnest. But fisheries managers have begun to recognize that if the global demand for forage species rose suddenly, species not currently being fished could be at risk for overfishing—which could destabilize the ocean food web. To head off that possibility, the Mid-Atlantic Fishery Management Council last year prohibited new large-scale fishing on forage species unless scientific data could show such fishing would not harm the ocean food web. The New England Fishery Management Council should also take this proactive approach to protecting the many forage species in its region. And when it comes to species that are already depleted, like river herring and shad, it only makes sense for managers to develop a plan to rebuild them.

3. Reduce bycatch and negative impacts on other fishermen.

Large-scale commercial fishing for forage species has a problem with bycatch—the unintentional capture of nontarget fish. In Massachusetts, for instance, recreational fishermen lose the chance to catch bluefish and other game fish when squid fishermen sweep them up offshore. River herring and shad species, which many recreational fishermen would like to catch, are struggling to rebuild in part because they get caught in nets meant for Atlantic herring, a relative they school with in the ocean. Managers need to do more than fund common-sense monitoring of this problem, especially when the solution is so simple. If managers protected specific, well-defined spawning and schooling areas—buffer zones—during certain times of year, they could significantly reduce bycatch. This would provide more selective fishermen, like those pursuing recreational species and some commercial species like bluefin tuna, with improved opportunities.

Smart management of forage fish is an important part of ecosystem-based fisheries management, the gold standard for sustainably managing fishing. And beyond delivering benefits for forage fish, ocean predators, and today’s fishermen, it would also serve our youngest lovers of ocean wildlife.