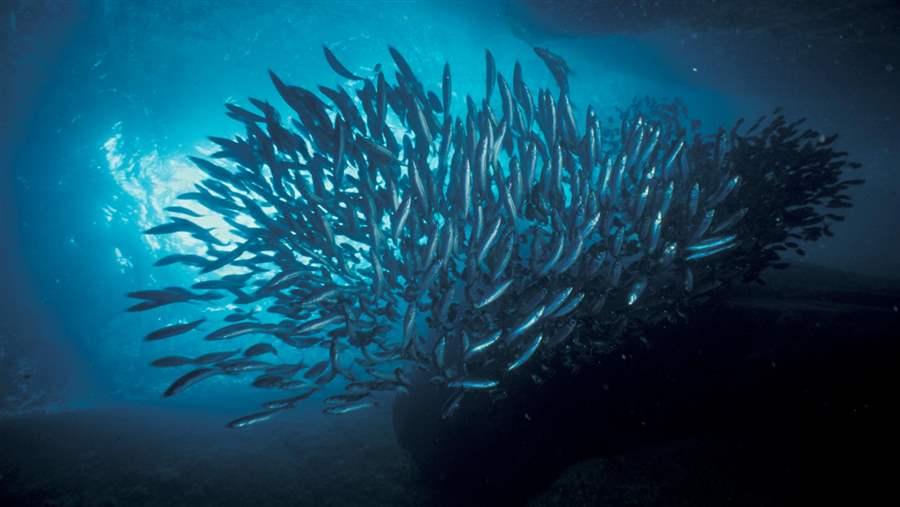 Atlantic herring, which school in enormous numbers, are important food for ocean predators. Fisheries managers are beginning to take into account the fish’s role in the ecosystem when setting catch limits.

Schools of Atlantic herring are hypnotizing to watch. Like many other small fish, they gather in enormous numbers—ranging from thousands to more than a million—and swirl in morphing shapes as they divide and reunite in their efforts to avoid lunging predators.

Those hunters include whales, bluefin tuna, cod, and puffins, and the survival of those animals in the waters off the U.S. East Coast is linked to healthy populations of Atlantic herring and other small prey, known as forage fish.

How many Atlantic herring are available as prey depends in part on how many are taken from the water through commercial fishing. And a great quantity of Atlantic herring can be caught in short order. The vessels pursuing Atlantic herring are industrial in scale: With football field-sized nets and enough space to store a million pounds of fish, these behemoths dwarf the quintessential New England fishing boat. 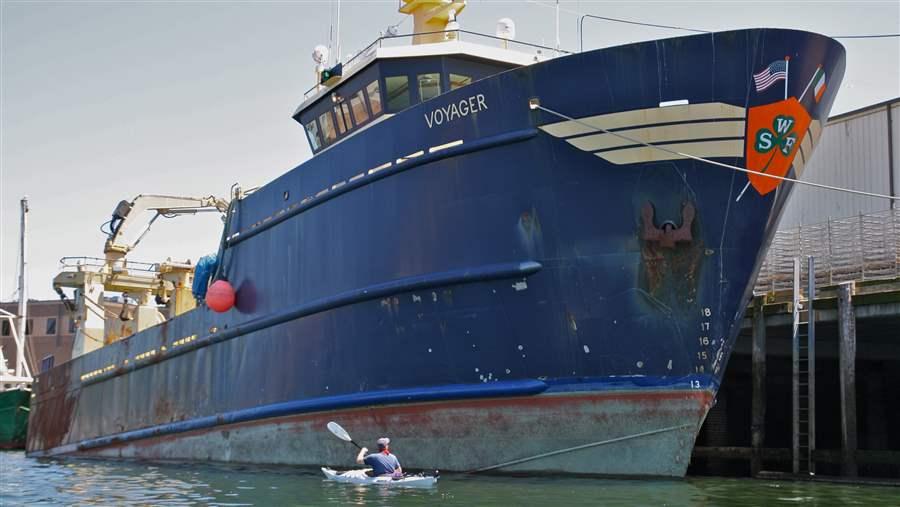 Vessels that catch Atlantic herring in New England dwarf the size of most New England fishing boats—and the kayaker pictured here. With nets the size of a football field and space onboard to store a million pounds of fish, these trawlers are among the biggest on the entire U.S. East Coast.

Even after they are netted, Atlantic herring often become prey again in Atlantic waters off New England. Once landed in Portland, Gloucester, New Bedford, and New Jersey, most are sold as bait for lobster traps.

Like all fish, Atlantic herring do not live in isolation from other species or from their habitats; they are one piece in the ocean ecosystem puzzle, connected to many others. And because Atlantic herring are important prey for so many animals, what happens to them ripples through the entire ocean food web.

Around the country, fishery managers have begun a transition to ecosystem-based fisheries management, which considers how fishing for individual species affects the wider ecosystem, and how such factors as ocean conditions, and the presence or absence of predators, affect the number of fish that can be caught sustainably. The New England Fishery Management Council is using this modern, realistic approach as it reconsiders how it sets catch limits for Atlantic herring. Specifically, managers are taking into account how much Atlantic herring the predators need for sustenance before calculating how much can be sustainably removed from the ecosystem by fishermen.

In December 2016, the Atlantic Herring Committee, which reports to the New England council, organized a workshop for scientists to discuss examples and strategies for setting a “control rule” to help guide these ecosystem-based catch limits. Among the most important components of such a rule are the “target”— the ideal amount of fish that should be available to predators—and the “threshold,” or the lowest level the population could reach before managers would suspend fishing to allow the species to rebound.

Earlier this month, scientists briefed the Atlantic Herring Committee on the many options for choosing a target and a threshold. A similar presentation will be delivered today to the New England Fishery Management Council.

It’s easy to voice support for the broad concept of ecosystem-based fisheries management informed by science, but the fact is that making a choice between various options—each of them founded on science—is not always simple or clear. We all know the stultifying experience of facing too many options: We may get so overwhelmed that we choose to do nothing. But progress doesn’t just happen on its own; it requires judgment and leadership, and sometimes a leap forward into unfamiliar territory.

That’s why I hope the New England council recognizes its important role today in providing direction to scientists and advisers pursuing better management for Atlantic herring. The council should move toward ecosystem-based fisheries management to help deliver a more sustainable future for fishermen and the ocean ecosystem. That’s something everyone with a stake in this issue can support.