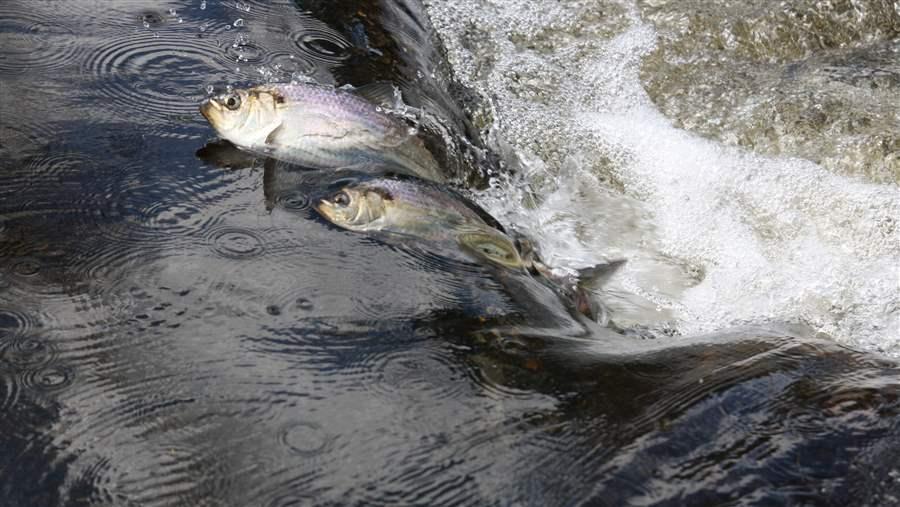 River herring making their way up a fish ladder in Massachusetts.

At its Oct. 5 meeting, the Mid-Atlantic Fishery Management Council will vote on whether to develop a management plan for alewife, blueback herring, American shad, and hickory shad—collectively known as river herring and shad—in federal waters.

Those species have been governed under well-intentioned but limited state measures, with effectively no management in federal waters. As a result, river herring and shad populations coastwide are not rebuilding, because hundreds of thousands of fish are being caught incidentally by vessels targeting other species and are either sold or dumped overboard. Federal management is the missing piece to the conservation puzzle—the key to the recovery of these ecologically, economically, and culturally important populations.

Here are 10 reasons the council should vote to extend federal management to river herring and shad:

There is widespread agreement among managers, fishermen, and scientists that river herring and shad populations are severely depleted along the East Coast, especially in the mid-Atlantic region. According to recent estimates, river herring and shad numbers coastwide are at less than 5 percent of their historic size.

The Mid-Atlantic Council has a solid record of using management to rebuild species that are depleted, such as summer flounder and black sea bass. In fact, none of the species under the council’s management are overfished, defined as a population size that is unsustainably low. Populations of fast-growing forage fish such as river herring and shad can rebuild relatively quickly under the right conditions, which means fishermen could see progress soon after effective conservation measures begin. Just a few years after catch limits began for Atlantic menhaden, another forage fish in the region, fishermen are seeing them migrate to areas they haven’t visited for years or even decades.

3. Millions more fish could return to the Atlantic coast, benefiting the entire ecosystem.

Increased populations of river herring and shad would provide more food for birds and larger predator fish such as bluefish, striped bass, and tuna. These animals help fuel coastal economies from North Carolina to Maine that rely on fishing industry jobs, a steady supply of fresh seafood, and related tourism and recreation revenue. The growth of river herring and shad populations would also relieve pressure on other populations of forage species, including menhaden, Atlantic herring, mackerel, and squid, which the council and other management bodies are responsible for conserving and managing.

Historically, a number of cultural and community events have centered around the stunning runs of river herring and shad up rivers in states along the East Coast. For many fishermen, river herring and shad fishing is a family tradition passed down through generations. Successful rebuilding of the populations could reinvigorate activity along rivers and strengthen the connection between residents and their natural resources.

5. Huge investments in rebuilding river herring and shad are at stake.

From 1998 to 2006, federal, state, and local governments and stakeholders spent more than $100 million to improve habitat and water quality, remove dams, build fish ladders, and otherwise help these fish in coastal waters and rivers where they reproduce. States have taken strong conservation measures, including moratoriums and strict catch limits on fishing for river herring and shad, and have limited some industrial activities at certain times and in certain places. But these investments in rebuilding river herring and shad are being undermined, because too many fish are still dying as bycatch in large commercial fisheries at sea.

6. Fishermen on the rivers and coasts are doing their part to solve the problem.

In most states, commercial and recreational fishermen must release every river herring and shad they catch in rivers or state waters. Many fishermen and communities would like to keep the fish and use them as bait or food, or to continue community traditions. But people follow the rules and contribute to conservation efforts because they are invested in recovery.

7. The current system for managing river herring and shad is not working.

River herring and shad have been managed in state waters for 30 years, and recently managers attempted to limit incidental catch at sea by introducing interim measures in federal waters. But only some people in the fishing industry participate in the voluntary avoidance program, and enforcement of the incomplete set of catch caps—designed only to prevent significant increases in how many fish are caught at sea—is hampered by poor monitoring. There is no evidence of sustained improvement in the health of the species. The same river herring and shad being saved by measures in state waters are still being captured and then either discarded or sold by industrial-scale commercial fisheries in federal waters.

8. Fishing in federal waters is capturing large numbers of river herring and shad.

Like salmon, river herring and shad spend most of their lives in the ocean, where they school with other fish species, including those targeted by fishermen in federal waters, which start three miles from shore. Recent genetic analysis shows that river herring originating in mid-Atlantic rivers are being swept up in federal waters by trawlers seeking Atlantic herring, mackerel, butterfish, longfin squid, and whiting. Only federal management of river herring and shad can create a comprehensive and effective plan to minimize the amount killed as bycatch that will complement the conservation efforts underway in state waters.

9. Many of the steps needed under federal management are already in process.

Before federal managers can begin overseeing a species, they must have a scientific assessment of its population, management goals for the population, and a plan for reaching those goals. Important pieces are in place already: The Atlantic States Marine Fisheries Commission is planning stock assessments for river herring and shad for 2017 and 2018; a NOAA technical expert working group for river herring is compiling information; a River Herring and Shad Committee and Advisory Panel serves the Mid-Atlantic Council; and council staff members have completed significant work analyzing river herring and shad issues. Managers still need to identify which commercial fisheries in federal waters are affecting river herring and shad and to what degree; set specific conservation goals, including science-based coastwide annual catch limits; and ensure that federal and state efforts are enforceable and working in tandem. This will take additional time and resources, but the remaining requirements can be planned and completed without significantly disrupting ongoing work and will be the key to effective conservation.

10. There is strong public support for effective federal management of river herring and shad.

During past council deliberations, tens of thousands of people have voiced their support for conserving river herring and shad at sea by adding them to a federal fishery management plan. The public understands that these fish populations, once abundant in the Atlantic Ocean and in rivers along the coast, are natural resources that should be rebuilt, conserved, and enjoyed.

Restoring and maintaining river herring and shad populations will take commitment, cooperation, and coordination from all authorities responsible for their management. The Mid-Atlantic Council has an opportunity to lead the way in addressing the threats these species face at sea by establishing the coastwide science-based measures that are the missing piece of the recovery puzzle for these beleaguered species.