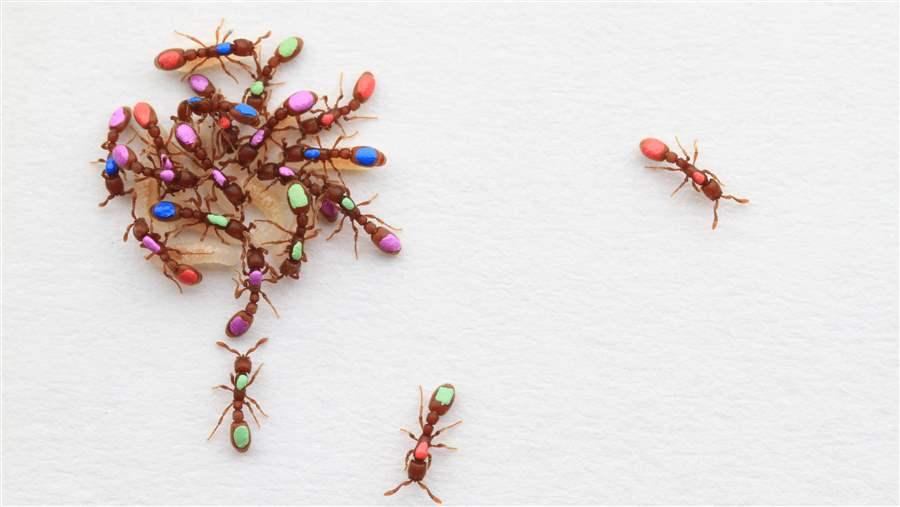 Ants show sophisticated social behavior and division of labor, as in this photograph of a colony of clonal raider ants individually tagged with colored dots for behavioral studies.

Researchers today are opening doors to understand the molecular driving forces behind communal behaviors and tools that dominate social life. While scientists have used fruit flies and worms as models to understand fundamental questions about human behaviors and development, Daniel Kronauer, Ph.D., a 2015 Pew scholar at The Rockefeller University, uses ants to learn how complex societies are organized. Specifically, Kronauer breeds clonal raider ants (Ooceraea biroi) to investigate how genetic and environmental signals guide important social behaviors. This unique species adapts easily to different societal roles—from the egg-laying to the food-gathering phases—making it an ideal model for learning how individual units come together to accomplish a greater group-level goal.

Ants are known to produce a myriad of different pheromones in order to communicate with each other. These chemical signals help ants by distinguishing colony members and distributing work, and guiding them on survival and reproductive strategies. However, little is known about the molecular basis of how ants decipher chemical signals. In the recent issue of Proceedings of the National Academy of Sciences, Kronauer and his colleagues, including 2012 Pew scholar Vanessa Ruta, Ph.D., shed light on the genetics behind pheromone sensing in clonal raider ants.

By sequencing the genome of clonal raider ants, Kronauer uncovered a large set of genes—a group that contains instruction for creating 180 odor receptors—responsible for the insects’ ability to sense chemical signals around their environment. Further evolutionary analyses have shown that these genes evolved rapidly, expanding their repertoire in the genome over the course of the ants’ evolution. Looking more closely at how the odor receptors are organized anatomically, Kronauer found that they are uniquely clustered in the specialized sensory portion of the females’ antenna—the basiconic sensilla—which allows the ants to easily detect chemical cues.

Kronauer believes that such a rapid expansion of this group of odor receptor genes affirms the importance of chemical communication in guiding social behaviors in ant societies. He describes just how important these receptors are in a recent feature of his work on ants in The New York Times. Remarkably, ants that were genetically engineered without certain odor receptors avoided socializing and wandered around on their own terms but had no problem finding food, highlighting the influential effect odor sensing plays in the operational success of these miniature societies.

Over the last 30 years, Pew&rsquo;s biomedical programs have supported more than 800 innovative, early-career researchers who are working to advance human health. More than just providing financial support, the programs give scientists the opportunity to learn from a network of established researchers through collaboration and mentorship.