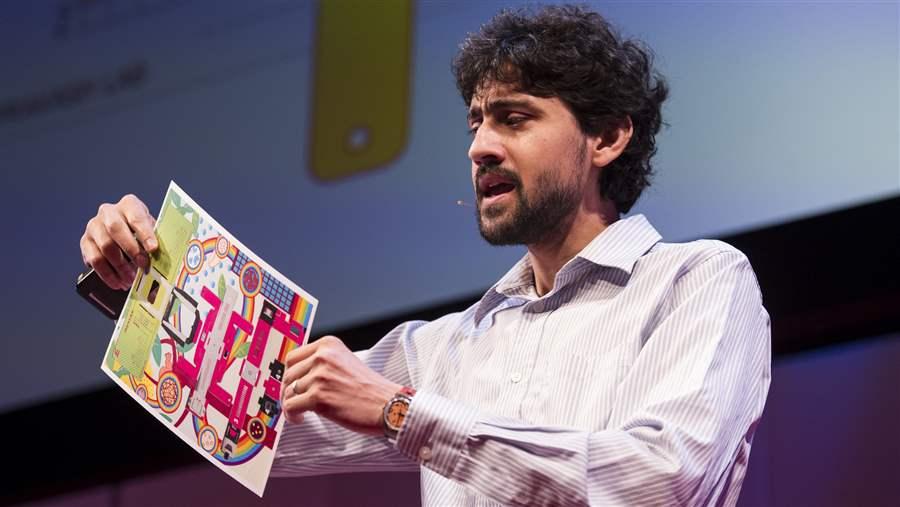 The John D. and Catherine T. MacArthur Foundation announced its 2016 fellows on Sept. 22, and among the prestigious prize’s 23 recipients was Manu Prakash, a 2013 Pew scholar and assistant professor of bioengineering at Stanford University. The MacArthur Fellowship provides unrestricted five-year grants to exceptionally creative individuals in diverse fields and, similar to Pew’s biomedical research programs, encourages exploration of new or neglected questions and collaboration across disciplines.

At 36 years old, Prakash has already made significant contributions to his field. His laboratory developed the Foldscope, a lightweight yet durable paper microscope that can be assembled for less than a dollar; OScan, a smartphone app to detect oral cancer; and a chemistry set created from parts of a music box. Through such innovations, Prakash aims to make science more accessible and affordable for nonscientists and those living in remote areas.

“It’s really about letting people ask their own questions, both in a whimsical way … but also in a very serious manner that affects their own lives,” Prakash said in a video posted with the announcement of his MacArthur award.

As a Pew scholar, he is developing tools to monitor parasites carried by insects to try to understand—and eventually prevent—the more than a million human deaths caused by diseases like malaria each year. These monitoring tools will be coupled with cellphone applications that citizen scientists can use to map and track the spread of disease.

Prakash’s work has been featured in major media outlets including The New York Times, Scientific American, The New Yorker, and Popular Science. In 2014, he was named one of MIT Technology Review’s “35 Innovators Under 35.”

This year’s class of MacArthur fellows includes other promising young biomedical scientists, such as Dianne Newman, a microbiologist at the California Institute of Technology; and Rebecca Richards-Kortum, a bioengineer at Rice University.

Charles Rice, Ph.D., a molecular virologist at Rockefeller University and 1986 Pew biomedical scholar, will receive the 2016 Lasker-DeBakey Clinical Medical Research Award on Sept. 23 for his role in finding an effective treatment for hepatitis C, an infectious disease that afflicts more than 130 million people worldwide and contributes to 700,000 deaths annually. Rice devised a system to grow the hepatitis C virus in laboratory settings, allowing scientists to study its replication and ultimately invent medication that eliminates these infections in about 90 percent of patients.