For many Americans, setting aside money in a workplace retirement plan has become a critical component of ensuring financial security in their later years.  Yet more than 40 percent of full-time private sector workers say they lack access to either a pension or an employer-based retirement savings plan such as a 401(k).

Access to workplace retirement plans varied greatly—nearly 50 percentage points—among the 104 metropolitan statistical areas (MSAs) with populations of at least 500,000 that were surveyed during a recent retirement study by The Pew Charitable Trusts. 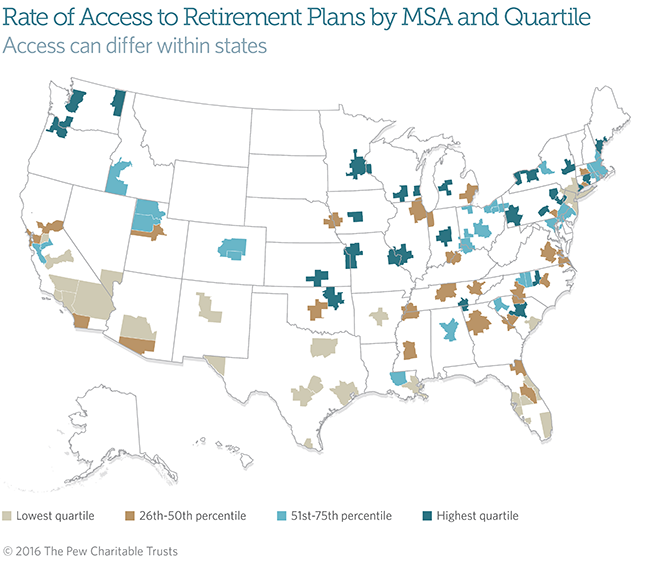 Access rates can differ greatly within states and are often lower in metropolitan statistical areas with a large proportion of small employers.  MSAs with higher proportions of lower-income workers also have lower access rates, as do those with greater numbers of Hispanic workers.

The highest access rate—71 percent—was in Grand Rapids, Michigan (although many other areas had rates within a few percentage points), and the highest regional rates were in the Northeast, Upper Midwest, and Pacific Northwest.

The lowest rates of retirement plan access were concentrated in the metropolitan areas of three states: Florida, Texas, and California.

Differences pop up even within the same state. For example, 68 percent of workers in Columbia, South Carolina—the state’s capital and largest city—have access to a retirement plan, while less than 120 miles away, just 50 percent of workers do in Charleston, the state’s second-largest city. The variation probably results from each area’s mix of industry and worker characteristics.

The data show how employer size and type, worker salary and income, and worker ethnicity and race can be correlated with rates of access and participation in employer-based retirement plans. Metropolitan areas with higher shares of workers at small employers generally have lower access to plans.

Workers who earn less than $25,000 in wage and salary per year had an access rate more than 50 percentage points below that of workers earning $100,000 or more (22 percent versus 75 percent).

Industries and workers that tend to have lower access rates are heavily clustered in certain metropolitan areas, which means that government efforts can reach large numbers of people in these places. New York City, for example, is considering a proposal to expand retirement plan coverage for the private sector workers within its boroughs.