With the aging of the nation’s population, a continued decline in the availability of traditional pensions, and concerns about the future of Social Security, many Americans worry that they won’t be able to save enough to pay for their retirements.

Today, workers in the United States accumulate the vast majority of their retirement savings through employer-based plans such as 401(k)s, but many don’t have that opportunity.

Only about half of full-time private-sector workers—49 percent—participate in a workplace retirement plan, according to an analysis of data compiled by The Pew Charitable Trusts. Overall, 58 percent of workers have access to such a plan.

Looking at the numbers in a different way, more than 30 million full-time, full-year private-sector workers ages 18 to 64 lack access to an employer-based retirement plan.

The analysis also shows that:

Pew released a data visualization that shows how employer-based retirement plan access and participation vary among states and by characteristics such as employer size, industry, and wage and salary income. Users can click through the various tabs to obtain information of interest. 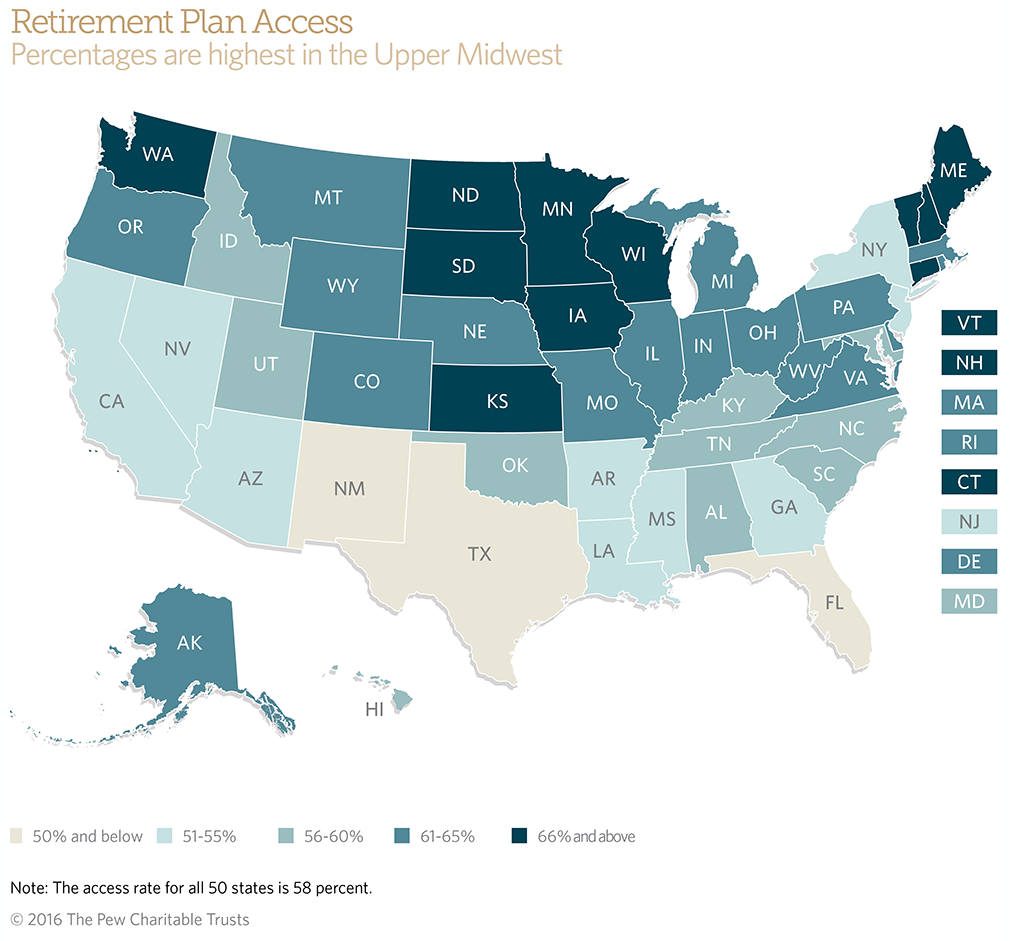 What states can do

The report also looks at numerous efforts at the state and federal levels to boost retirement savings. Illinois, for instance, adopted the Secure Choice Savings Program in 2015, which will start enrolling certain private-sector workers in new payroll-deduction retirement accounts by 2017.

In Washington, the state has created a marketplace in which small employers and the self-employed can shop for retirement plans. And the federal government has rolled out the “myRA,” a new national savings program that is geared toward low-income savers.

The report’s authors make clear that because of the wide differences in access and participation across the country, state lawmakers should consider the unique social and economic features of their states. For example, certain states have more workers at small businesses or in industries with relatively high turnover.

Other states have higher shares of minority workers who may benefit from targeted outreach materials to expand participation in new or existing plans.

Taking into account the characteristics of a state’s labor force can help policymakers improve retirement security while balancing the needs of both workers and employers.

With the aging of the nation&rsquo;s population, a continuing decline in the availability of traditional pensions, and concerns about the future of Social Security, many workers in the United States worry that they won&rsquo;t have enough money set aside for their retirements.