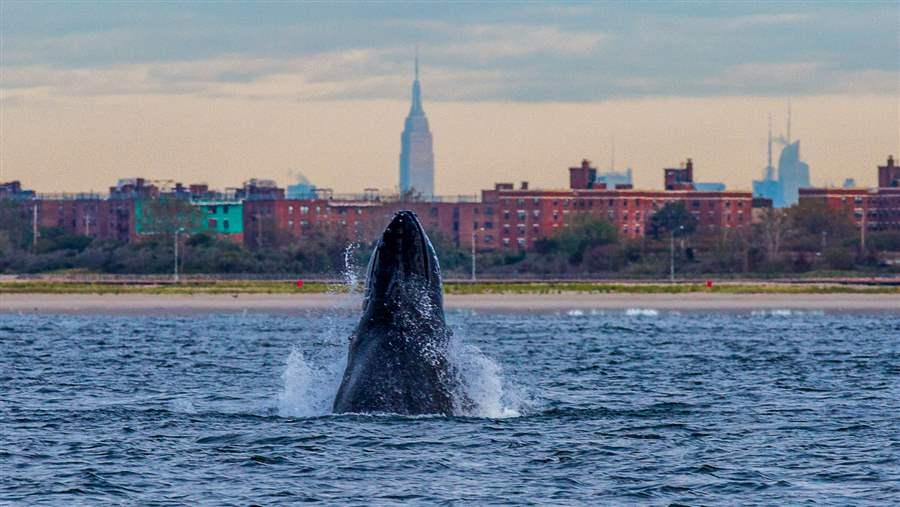 The humpback whale nicknamed Rockaway Jerry enjoys a forage fish meal with a Manhattan view on the side.

The image put Gotham Whale on the map of New York City attractions: a humpback rising from the water against a postcard-perfect Big Apple skyline.

“That’s our iconic picture and our iconic whale,” said Paul Sieswerda, president and founder of the nonprofit research organization Gotham Whale, which operates in partnership with American Princess Cruises in New York.

Few people would have thought it possible to see whales so close to America’s most populous city until Gotham Whale volunteer Artie Raslich’s photo appeared in The Guardian and other news outlets in the summer of 2013. Now, tourists from around the world join the cruises to enjoy whale watching with a Manhattan view.

The return of that whale, nicknamed “Rockaway Jerry,” and dozens of other whales to New York’s waters is partly due to smarter management of our ocean resources. “It is my belief that it is all based on the fish,” Sieswerda said. “Whales are back in greater numbers, and they are here to feed on forage fish.”

It’s a success story that Sieswerda and I would like to see a lot more of, as we seek to modernize the nation’s principal ocean fishery management law to take into account the needs of whales such as Rockaway Jerry. 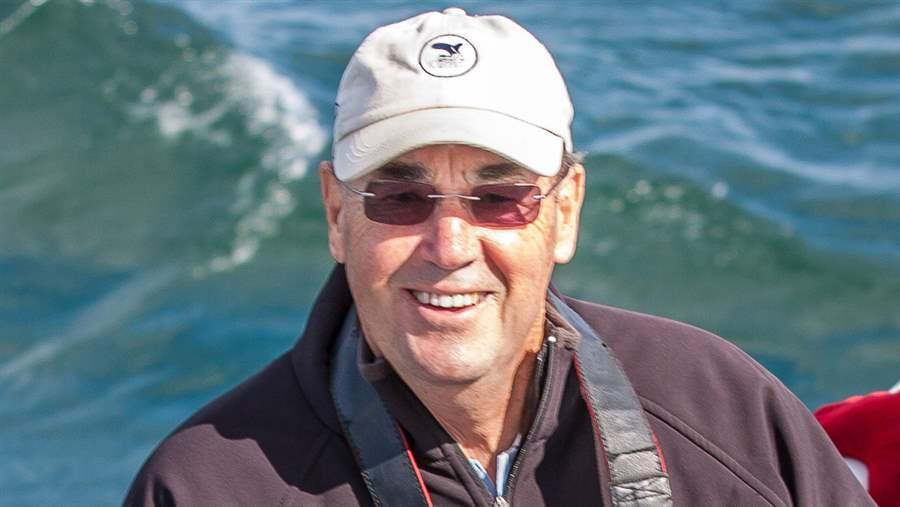 Paul Sieswerda on the lookout for the growing number of whales in New York’s waters.

Forage fish are the small, schooling prey that provide an important food source for many other animals. For Rockaway Jerry, the main forage species is the Atlantic menhaden, also known locally as “bunker,” an oily fish that rarely grows to more than 15 inches in length. About half of the Gotham Whale volunteers’ documented sightings involve humpbacks lunging through schools of menhaden to feed.

In 2012, the Atlantic States Marine Fisheries Commission approved the first coastwide limit on the amount of menhaden that could be caught, leaving millions more of the fish in the water for ocean predators to eat. More recently, the commission has taken steps to begin managing menhaden with the ocean ecosystem in mind, a “big picture” approach that Sieswerda hopes will inform how officials around the country set catch limits for other forage species.

“As a model of success, menhaden management has done wonders for our whales in and around New York,” Sieswerda said.

After a 40-year career as an aquarium curator, Sieswerda, now 73, said he is enjoying retirement by “working harder than ever” to launch Gotham Whale’s citizen science project, which allows volunteers to record whale sightings and activity. “It is so exciting to build this organization and to see and study whales right here in New York City, so I’m having fun,” Sieswerda said.

Over the years, Sieswerda has seen firsthand how landmark laws such as the Marine Mammal Protection Act, the Clean Water Act, and the Magnuson-Stevens Fishery Conservation and Management Act have dramatically improved the lot of marine wildlife.

Whales are back in greater numbers and they are here to feed on forage fish.

The key, Sieswerda said, is to pay attention to all the parts of nature—the condition of the water, the abundance of food, and the protections that marine mammals require.

“Every time we go out, we see the food web in miniature, from water quality to plankton growth to forage fish and then up to whales,” Sieswerda explained. “Each trip is an illustration of that complex web of life. So looking beyond a single species is very important.”

Lawmakers have an opportunity to do just that—by modernizing the nearly 40-year-old Magnuson-Stevens Act to include what’s known as ecosystem-based fishery management, to address these interactions among different species and how they depend on the ocean environment.

In addition to the menhaden, many other types of forage fish—such as Atlantic herring, anchovies, and the fingerlike sand lance—are important for whales as they make their way along the Atlantic Coast. Unfortunately, these species are not currently managed with the needs of whales and other animals in mind. Some of these forage species are not managed at all.

Like Sieswerda, I would like the law to ensure that there will be enough of these forage fish to keep Rockaway Jerry and other whales a regular sight along our coast. “Here’s a model of success,” Sieswerda said, looking out on the water from his Staten Island home. “So let’s keep it going.”

The Magnuson-Stevens Act is entering its fourth decade and could use an update. It's time for a new focus in fisheries management. Learn more at pewtrusts.org/healthyoceans.