Forage fish are small, schooling species that eat microscopic plants and animals drifting near the ocean surface and are then consumed by bigger fish, seabirds, and marine mammals. Common forage fish are sardines, herring, and anchovies. Others, such as saury and sand lance, aren't as widely recognized but still serve a critical ecological function. Some species of squid and tiny shrimplike creatures called krill are also considered forage fish because many marine species rely on them as a principal food source.

Forage fish are an indispensable part of the marine food web on the Pacific coast. The California Current, flowing south along the coast, is one of only a few large marine ecosystems in the world dominated by periodic upwelling of cold water. This upwelling pulls nutrients from ocean depths, fueling the growth of microscopic phytoplankton at the surface. Forage fish feast on these blooms of life, forming the connective tissue between tiny plants and animals and larger fish, marine mammals, and birds. A decadelong study published in 2011 revealed that tuna, sharks, seabirds, seals, and whales travel east across the ocean every year to feed on the rich marine ecosystem off the West Coast. Their dietary staple: forage fish. 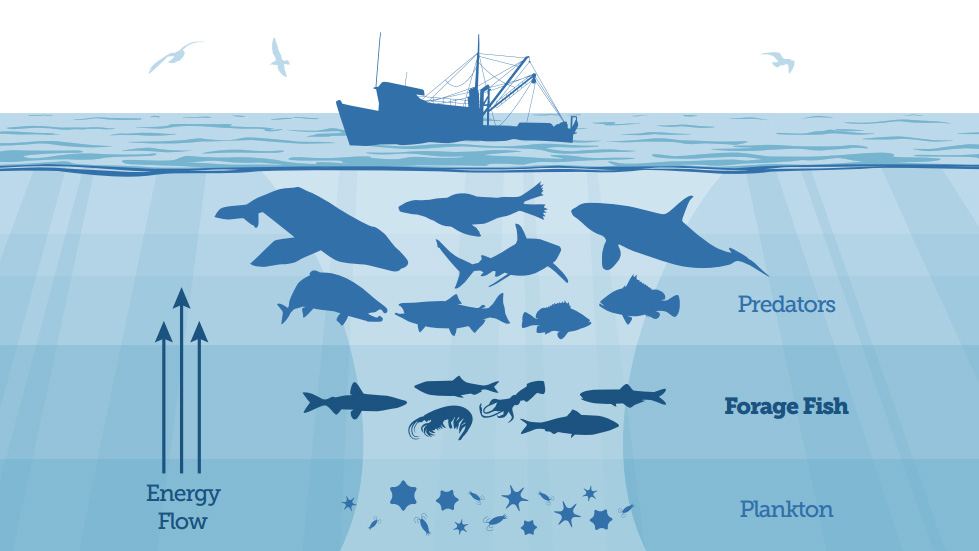 Inadequate sources of forage mean ocean wildlife have less to eat. In the past decade alone, depleted forage fish populations on the Pacific coast have been associated with failed salmon runs, starved sea lion pups, and declining seabird populations.

What are the main threats?

In setting quotas and fishing limits, fisheries managers have traditionally overlooked the critical role that forage fish play in marine ecosystems. As a result, fishing for forage species at a rate that is not considered overfishing (taking fish faster than they can reproduce) in the technical sense may lead to catching forage fish in such large quantities that there is insufficient food left in the ocean for other marine wildlife that depend on them for survival.

And there is increasing market pressure to expand fishing on forage species to supply fish meal and oil for a booming global fish-farming industry, which now accounts for almost half of the seafood consumed by people worldwide. Internationally, forage fish account for more than a third of the total global catch of wild marine fish, with 90 percent of it processed for fish meal and oil. On the West Coast, most of the sardine catch is exported, typically for purposes such as bait for industrial longline tuna fishing. Some of it has been frozen and shipped as far away as Australia to feed penned tuna.

But they reproduce quickly. Won't they be just fine?

Scientists are finding that forage fish populations are just as susceptible to long-term population declines as larger fish in the food web. That's bad for salmon, groundfish, tuna, and other predator species that are the basis for valuable fisheries that support our coastal communities. It's why the North Pacific Fishery Management Council prohibited fishing for many key forage species in Alaska beginning in 1998, with the strong support of commercial fishermen. On the West Coast, the Pacific Fishery Management Council took a similar approach by putting krill off-limits in 2006.

What is the solution?

Forage fish need to be managed under catch limits that consider their role in sustaining a productive marine ecosystem. In April 2013, the Pacific Fishery Management Council took the first step in this direction by unanimously adopting an ecosystem-based management plan with a priority to exert control over currently unfished forage species before fishing for them can begin. The plan's development team noted that the “spectacular growth” of global aquaculture is raising the likelihood for industrial-scale fishing to expand to forage species that aren't yet being fished on the West Coast.

Ask the Pacific Fishery Management Council to help ensure a balanced and productive marine food web by protecting forage species that aren't currently being managed, among them the Pacific saury, sand lance, and various types of smelt. Tell the council that protecting the forage base off our shores is essential to managing fisheries in a sustainable manner to ensure the long-term health and productivity of the West Coast marine ecosystem.

Small schooling species such as sardines, sauries, and smelt—commonly known as forage fish—play a critical role in sustaining a vibrant Pacific Ocean. These species eat tiny plants and animals, in turn becoming an important food source for bigger fish, seabirds, and marine mammals.