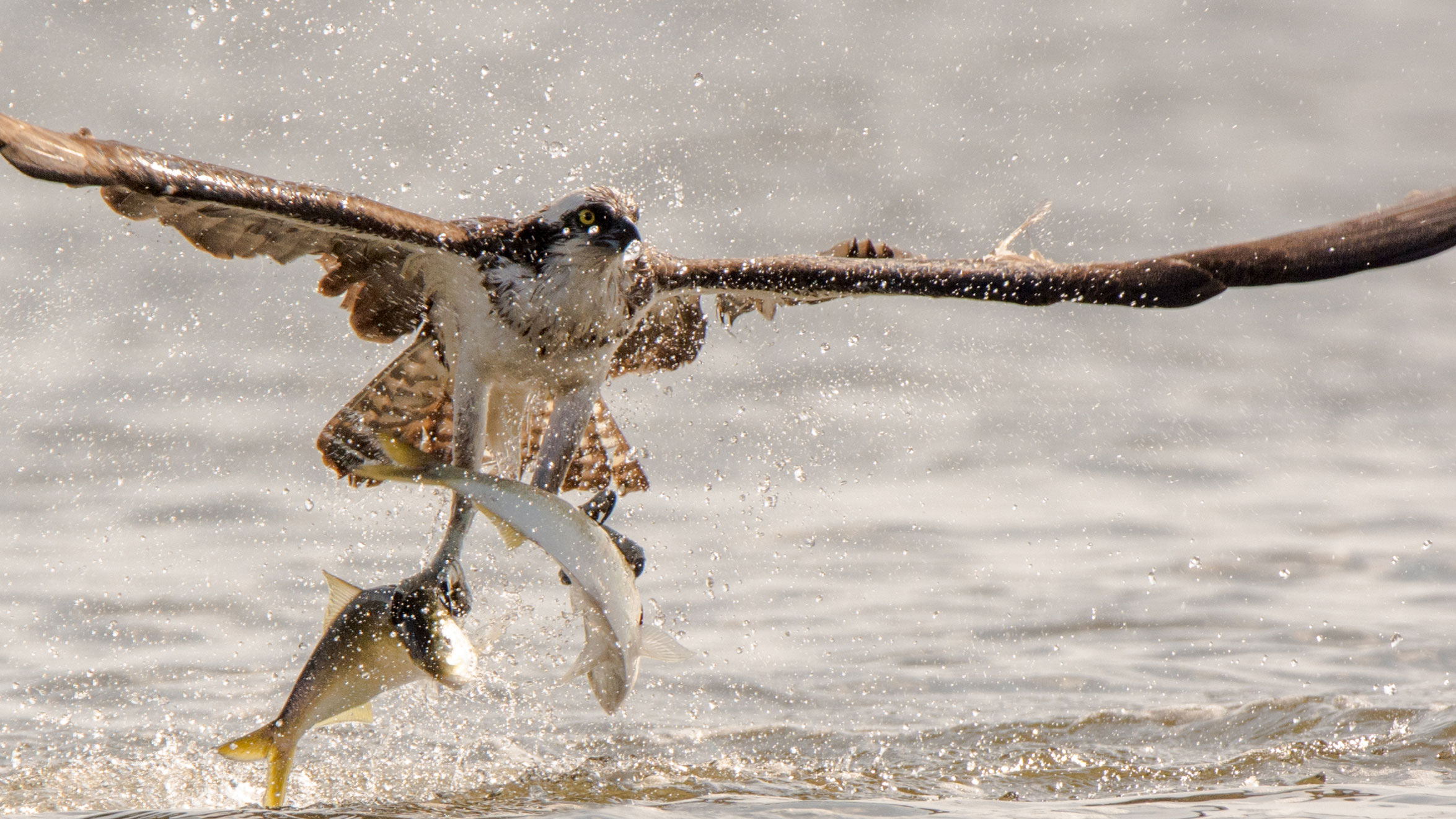 An enterprising osprey snags two menhaden at a time.

Coastal business owners, birders, and bass fishermen from Florida to Maine got good news May 5, with a big vote on the little fish called Atlantic menhaden.

The Atlantic States Marine Fisheries Commission decided to take a big picture approach to managing this prey species so that its vital role in the ocean food web is protected. This marks a major shift from the old way of setting catch limits—focusing on a single species—and gives the commission a better way to consider the health of the broader ocean ecosystem.

Big schools of fatty, oily menhaden are crucial for marine wildlife such as whales, striped bass, ospreys, and eagles, so much so that they've earned the moniker "the most important fish in the sea." But menhaden also are the most heavily fished species on the East Coast. Just one company nets nearly 290 million pounds of them a year to grind into fish meal and oil.

When the commission announced early this year that it would consider increasing the allowable catch of menhaden, thousands of people voiced concern. Recreational fishermen said their favorite sports fish, such as striped bass, need plenty of menhaden to eat. A whale watch tour operator shared data about how menhaden draw humpback whales to New York’s waters. Charter boat captains, restaurateurs, and eco-tour operators all spoke up for the need to keep this part of our coastal ecosystem intact.

The commissioners heard those concerns and rejected a request from the fishing industry to radically raise the allowable catch by more than 30 percent—a move that could have cut short the recovery of the menhaden population. Instead, they adopted a modest 10 percent increase in the annual quota for the next two years. Even with that increase, the catch will still be considerably less than it was a few years ago, before coastwide limits were enacted. In fact, The Pew Charitable Trusts estimates that since 2013, the catch limit has resulted in more than 750 million menhaden remaining in the water to fulfill their ecological role.

Commissioners also chose to develop what are called "ecological reference points" to guide future decisions about menhaden. This means that the needs of those whales, predator fish, and seabirds will be part of the equation when deciding how many menhaden can be taken from the sea in a particular year.

Reaction from various stakeholder groups has been positive. Chris Moore, a senior scientist with the Chesapeake Bay Foundation, told the Daily Press of Hampton Roads, Virginia, that he was pleased that managers were taking a "detailed look at the ecological value of menhaden as a forage fish for striped bass, bluefish, osprey, and other species."

David Sikorski of the Maryland chapter of the Coastal Conservation Association told The Baltimore Sun that while he would have preferred no increase in the catch limit, he was heartened by the pledge to take into account the menhaden that are needed for other fish to eat. Anglers have been especially concerned about the condition of popular game fish such as striped bass and weakfish, which have shown troubling declines in number. A recovery of those economically important species will rest in part on an abundant supply of food.

Much work remains to ensure that the commission follows through with its commitment to ecosystem-based fisheries management, but the vote we just witnessed is a major move forward for menhaden and all who benefit from them.