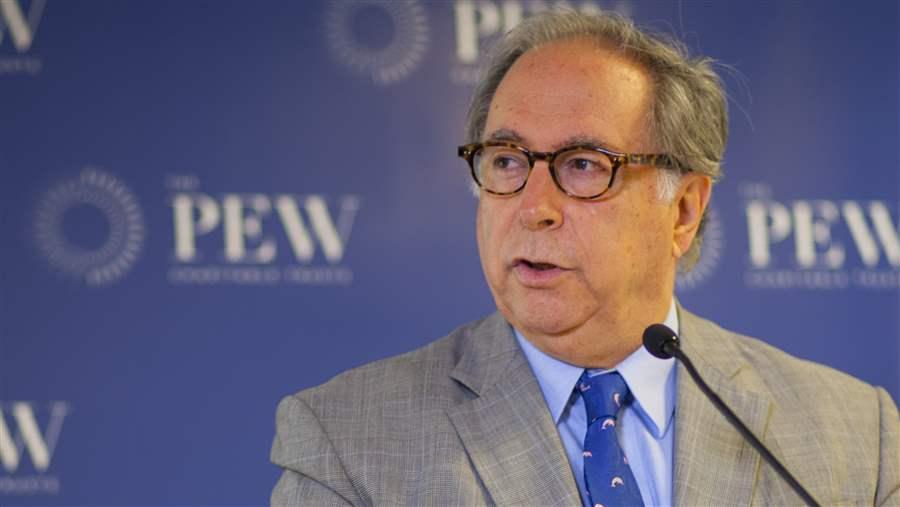 Ambassador Juan Gabriel Valdés discussed Chile’s commitment to ocean conservation and the upcoming ‘Our Ocean’ conference in Valparaíso on October 5-6.

Illegal fishing continues to pose significant threats to the world’s oceans, law-abiding fishing fleets, and coastal communities, but real solutions to the problem are emerging. That was the overarching message of a Sept. 2 expert panel discussion on large-scale illegal fishing and the benefits of marine protected areas.

The event, hosted by The Pew Charitable Trusts in Washington, also included a preview of the Oct. 5 and 6 Our Ocean conference in Valparaiso, Chile, at which officials from around the world will talk about solutions to the major threats facing the oceans. This will be the second of three planned Our Ocean summits; the inaugural conference took place in Washington in November 2014.

Juan Gabriel Valdés, the Chilean ambassador to the United States, told the audience that his top objectives for the Valparaiso meeting are finding agreement on how to govern the high seas, those areas beyond any nation’s jurisdiction; helping small island states work more closely with neighboring islands, in part to bring consistency to marine conservation efforts; and exploring how to best leverage philanthropy for conservation. He said civil society leaders, including nongovernmental organizations, foundations, and others committed to the environment, “need to have a more important role” in marine conservation.

To that end, Pew is working with the Chilean and U.S. governments on the planning of the October conference, and with officials on Chile’s Easter Island on the possible designation of a fully protected marine park there, as proposed by the Rapa Nui, Easter Island’s indigenous community.

Easter Island Mayor Pedro Edmunds Paoa also spoke at the event, calling for more scientific study of the sea surrounding his home. “The ocean is the future of the planet,” Paoa said. “We have to stop talking. We have to start doing.”

On a global scale, such action must include efforts to stop illegal fishing, which experts estimate accounts for up to $23.5 billion worth of seafood worldwide every year, or up to 1 in 5 wild-caught marine fish. The problem affects most coastal countries, though it is particularly acute around developing nations, which depend on sustainable fisheries for food and jobs but lack the resources to adequately police their waters.

Ian Urbina, a New York Times investigative reporter whose summer 2015 series, The Outlaw Ocean, detailed a wide range of crimes at sea, told the audience that he sees “a fair amount of momentum” toward addressing illegal fishing. Still, Urbina said he has been “haunted” by the degree of lawlessness he witnessed at sea—and by the complexity of the issues that must be confronted to curtail these crimes.

Smith emphasized the need for solutions that will block fishing fleets and suppliers from moving illegally caught product to market. He said the United States should ratify and implement the Port State Measures Agreement, a United Nations treaty that strengthens and harmonizes inspection standards for foreign-flagged fishing vessels coming to port.

Von Kistowski explained how a program called FISH-i Africa is helping resource-poor countries combat illegal fishing. The project brings together fisheries ministers from seven southeast African nations, who then share monitoring, control, and enforcement resources, along with fisheries data and other information.

This has enabled the partners “to increase their resources in a … cost-effective way,” she said. And the effort has yielded results, including the payment of a $1 million fine in 2013 by a Korean fleet owner after one of its vessels tried to land 1,100 tons of illegally caught tuna in Mauritius, a FISH-i member country.

Schaeffer, who recently joined Pew after 27 years in the U.S. Coast Guard, highlighted the value of marine reserves in safeguarding special areas of the oceans for their biodiversity, habitat, spawning areas, or other attributes.

While a coastal nation may lack the capacity to take action directly—for example, with vessels, aircraft, or even a functioning adjudication system—that government could ask big-market states such as the U.S. or European Union to blacklist the vessel or impose sanctions on its country of registration, Schaeffer said.

That still leaves the problem of how to know when a vessel breaks the law in a reserve or beyond a reserve’s boundaries. The most promising emerging solution to that quandary is satellite monitoring systems, including Project Eyes on the Seas, a platform developed by Pew and the U.K.-based Satellite Applications Catapult.

To watch a webcast of the Sept. 2 event, click here.