The world is looking to Canada’s Arctic Ocean for the promise of faster and cheaper intercontinental shipping and unexploited natural resources. The Arctic ice is melting because of climate change, which is creating a longer shipping season and has already resulted in vessel traffic increases of 166 percent through the Canadian Northwest Passage since 2004. Pew’s new report, The Integrated Arctic Corridors Framework, proposes a comprehensive system of tiered shipping routes that will benefit Canada, the shipping industry, and northern communities. 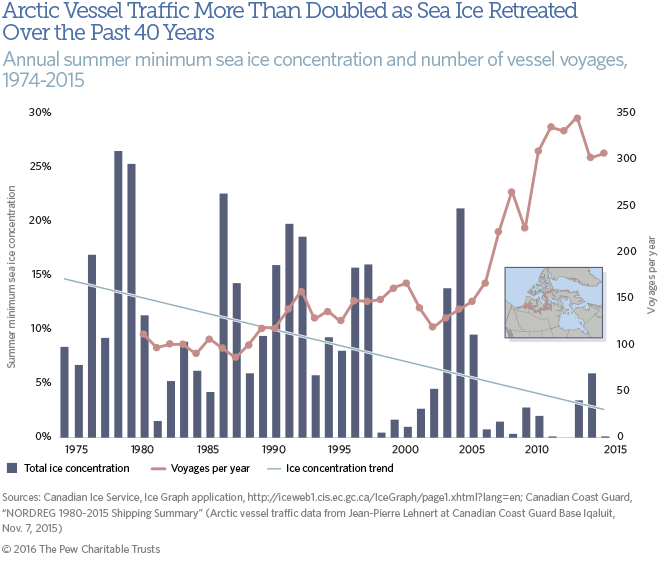 Ships traveling in the Arctic pass through a complex marine environment that comprises critical habitat areas, including many passages where the activities of birds, marine mammals, fish, humans, and ships converge. The Canadian government’s existing management of Arctic shipping does not sufficiently account for the environmental and social complexity of the region. For decades, government departments, academics, and civil society groups have made recommendations for reform. However, Canada still lacks a clear, cohesive vision for Arctic shipping policy.

In 2012, the Canadian Coast Guard began to address some of the deficiencies in the nation’s Arctic shipping policy by launching the Northern Marine Transportation Corridors Initiative (NMTCI). That initiative seeks to establish a system of voluntary marine corridors toward which the Coast Guard and other agencies could direct their financial, material, and human resource capacity to support vessel safety in the Arctic. The NMTCI could be the foundation for a national Arctic shipping policy, but for this to happen, it must be expanded to adequately account for the environmental and social complexity of Canada’s Arctic Ocean.

Over the past 10 years, the Canadian Arctic has experienced significant reductions in sea ice cover, while vessel traffic has more than doubled.

The Integrated Arctic Corridors Framework builds on the NMTCI to help Canada improve human and vessel safety in Arctic waters, empower Inuit organizations to ensure that Arctic shipping enhances instead of threatens their long-term well-being, reduce risks to the environment, and give mariners the guidance and tools to travel the safest possible routes. In this way, the framework would enhance the NMTCI so it can be the holistic national policy that Canada needs to meet the challenges of next-generation Arctic shipping.

The report’s key recommendations include the following: 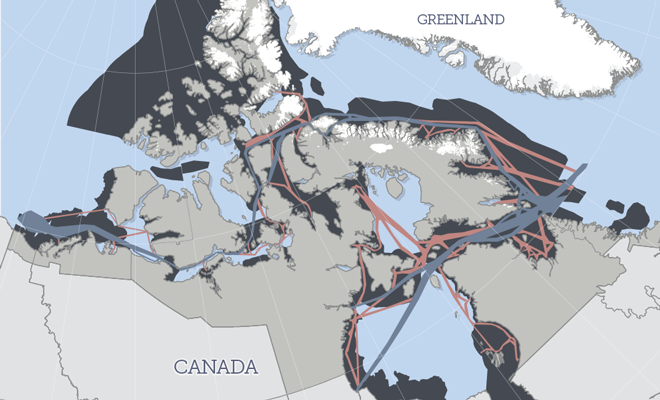